- September 21, 2018
I was going to have this post cover our visits to both the North and South Units of TRNP, but there turn out to be a lot of photos, so I'm breaking it in two.

Let's start with a quick overview of the park. Theodore Roosevelt NP is located in western North Dakota (you have no idea how tempted I was to write "southwestern North Dakota," which is actually kind of true). It is in 2 pieces, the imaginatively named South Unit and North Unit. Each contains a chunk of the Little Missouri River with bluffs overlooking same, and some badlands. The South Unit is somewhat larger, and includes both a looping scenic drive and a chunk of designated wilderness (the North Unit has an out-and-back scenic drive and aside from the corridor around that, is all wilderness). Highlights of the park are the terrain and the wildlife. The latter includes (in the South Unit, at least), bison, elk, deer, pronghorns, feral horses, and prairie dogs. We saw all but the elk.

Arriving in the park on the 27th of August we might have expected to be cooking in the sun, but in fact it was raining (as it had been most of the way from Seattle). We actually considered a motel room, but high prices for low value decided us to stick with camping. With my husband's National Parks "geezer pass" we paid $7/night for our campsites, with flush toilets but no showers or other amenities (standard national park campground). The rain let up enough for us to make dinner and to attend an interesting and educational "ranger talk" on managing the wildlife in the park. That was interesting, in light of the greeter who met us as we entered the park.
Later, we visited the Painted Canyon Visitor's Center, where the staff mow the lawn by eating it, and wander about reminding modest sedans that they are very, very small.
The next morning saw us determined to hike, regardless of the weather. Besides, it wasn't raining, mostly, and wasn't cold even in the drizzle.
We were hiking the Big Plateau loop, and began by hiking south between the river and the bluffs. We also began by losing the trail somehow, and pushing through the soggy grasses, but it led us to some pretty spots.
When we found the trail again, it had a guardian. The Park seems to employ a lot of these single bulls. We gave him a wide berth and picked up the trail well beyond his post.
Eventually the trail took us to the tops of the bluffs. In many places they have eroded out into badlands, made of clay soils that shift and erode too much to allow plants to get a toehold. When it rains, that clay turns to muck.
Proof that it got slick:
Hiked a long way across the aptly-named Big Plateau before descending to the river again. Saw pronghorns in the distance, and prairie dogs up close, as well as the ubiquitous buffalo droppings. I began to see how the settlers were able to use dried buffalo pats for fuel--they produce a lot of it.
Later, when we'd recovered from the hike (read: scraped the mud off ourselves and put our boots out to dry), we drove the scenic loop road.
A real treat on the drive was encountering a small bad of feral horses (what most of us grew up calling "wild horses". There have been no true wild horses in the Americas since before the last ice age. All our "wild horses" are descended from escaped or abandoned domesticated horses). These are some of the animals the park has to manage, to prevent overpopulation and overgrazing. Captured animals are adopted, and they are carefully monitoring for excessive in-breeding (also a problem in the bison herd).
We had trouble picking our place to enjoy the sunset. In the end, we managed to get great evening light at two spots.
Once we'd eaten and enjoyed the low light, we raced a few miles down the road to watch the sun set over the river. 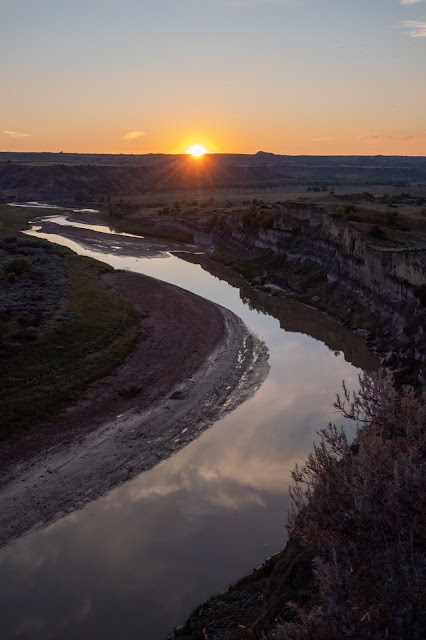 Back in camp, we got an extra treat as the color that had been missing from the sky at the river finally showed up.
Every beautiful evening deserves a good morning, as well. Dawn on the prairie is worth getting up for.
Despite spending two nights in the South Unit, it felt more like a scouting trip than an adequate visit. There were several great-looking hikes we didn't do, including to a collection of petrified wood on the outer corner of the park. The scenic loop would be great for biking as well, at least in the off season when there isn't too much traffic on it. We may never get back to this park, but if we do, we'll have some ideas what to visit.

Coming soon: biking and hiking in the North Unit.
©Rebecca M. Douglass, 2018
As always, please ask permission to use any photos or text. Link-backs appreciated.