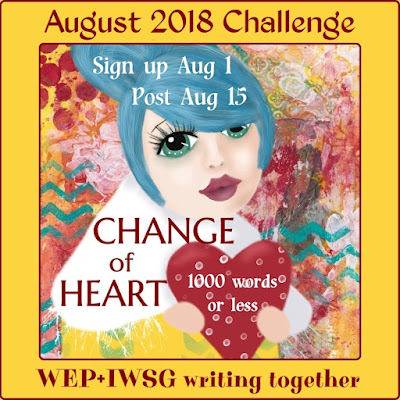 Write…Edit…Publish (WEP) is an online writing community now partnering with the Insecure Writers Support Group (IWSG). We post the third Wednesday of every second month. WEP challenges are open to all.

I'm supposed to post my feedback preferences, but I'm not sure what to ask for... I'll learn as we go here, so for now I'll just ask for whatever reactions you had to the story.

“There you go, Ma’am. There was a bit of nastiness, but it’s all clear now.” Jason tipped his hat to the absurdly grateful homeowner and collected his payment, smothering his smile until he was out of sight in his van. Then he allowed a broad grin to escape as he straightened the bills—more than he had asked for, no doubt as a token of her gratitude for cleaning up that “bit of nastiness”—and filed them in his wallet.

Jason shook his head. He kept hearing Great-Aunt Mathilda’s voice. How had the old biddy known what he was up to, anyway? He shook his head harder as he continued hearing her warnings. The old lady was crazy. What she said about the spirits proved it. Who but a crazy old lady would believe the ghosts were real?

Your clients do, a part of him argued.

“Well, they’re all crazy, too! Or just plain fools.” Jason realized he was talking aloud to the empty van and started the engine. “Next appointment, Siri?” That was talking to someone who wasn’t there as well, but it wasn’t considered crazy.

“Spirit clearance at 89 Witmore Lane.” The slightly sexy, slightly mechanical voice halted. “You’d better be ready for this one.”

What the hell? That hadn’t been part of his memo. Siri mostly sounded human, but she wasn’t. She couldn’t do that.

Jason shook off another wave of—not guilt, because he’d long since made sure he had no conscience. A frisson of fear? Well, hardly. Jason wasn’t one to be afraid of things that didn’t exist. His only fear was that someone would decide that ghost clearances were illegal, or that one of his clients would realize he was a fraud, because there were no spirits.

He pulled away from the curb and followed Siri’s directions to 89 Witmore Lane.

*
“I am so glad to see you, young man.” The well-aged homeowner greeted Jason effusively. “The spirits have been getting so obstreperous of late, I really didn’t know what to do, until I saw your ad.”

“And you have all that modern, up-to-date equipment,” Mrs. Smith said, gazing admiringly from the device in his hands to his van.

Jason, who knew that behind the curtained windows and gaudy paint the van was an ordinary camper badly in need of some house-cleaning, shifted a little, smiled, and gestured with the complicated device he carried. It was, in fact, a completely inert sculpture he’d picked up at a fund-raiser for the local middle school art department, but it impressed the clients. There were lots of dials and little windows with needles behind them.

“I’ll just get started, then, Ma’am.” He began walking toward the stairs, his eyes on the dials, pointing the ‘sensor’ around him. He was pretty sure that sensor had started life as the spray hose from someone’s kitchen sink, but the artist had turned it into a listening snake. Jason wished he’d been the one with that artistic talent.

He was upstairs when he caught the first movement. Not something seen out of the corner of his eye slipping around a doorway, which had happened several times before and which Jason attributed to an over-active imagination (though he in fact lacked imagination, he was not aware of this shortcoming). The movement he saw was in the main dial of the ghost-o-meter, known to his clients as a “spiritual emanations detector.”

He took a second look, but the dial was inert, as always. Just to be sure, he shook the box a bit. The needle didn’t budge. He turned it over and checked the dials on the other side. No movement.

He turned it back over and resumed his “scan” of the room, and the needle jumped again.

“Dag-nabbit!” He practiced a kind of folksy clean-cut persona for the old ladies. They ate it up. Mrs. Smith wasn’t in the room, but you never knew when the client might be spying on you. Some were so scared they left the house while he “cleared” the ghosts, but others wanted to learn how you did it. Jason always put on a good show. “Dag-nabbit! Am I going to start imagining things now?”

He twiddled with the control knobs for good measure, then continued his sweep, trying to ignore the needle that now jumped with each new movement of the sensor.

By the third bedroom, Jason had forgotten about putting on a show, and was alternately cursing and muttering to himself that there was no such thing as a ghost. If Mrs. Smith heard him, the jig might be up, but he was starting to hear whispers behind him and didn’t care anymore what she thought. He just wanted them to go away.

Actually, he cared enough to want to finish the job and get paid. The greedy part of his mind wondered if he could milk this one for a second visit. The rest of him was fast abandoning his lack of belief in ghosts and just wanted to get out.

He compromised, taking one last sweep around the upstairs hall, then turning to the stairs.

“I do particularly feel them on the stairs, dearie,” Mrs. Smith called from below. “Be sure you do a thorough job there.” She emerged from the kitchen to peer up at him as he made a great show of sweeping each step, peering into the dials and adjusting the knobs.

Jason was on the third step down from the top when he felt the hands in the middle of his back. He had time while he fell to reflect that there wasn’t anyone upstairs.

His neck broke when he hit the landing. The last thing he heard before he died was Mrs. Smith’s voice.

“You were warned not to mock the spirits. They don’t like it. Not one little bit.”

###
©Rebecca M. Douglass, 2018
As always, please ask permission to use any photos or text. Link-backs appreciated!