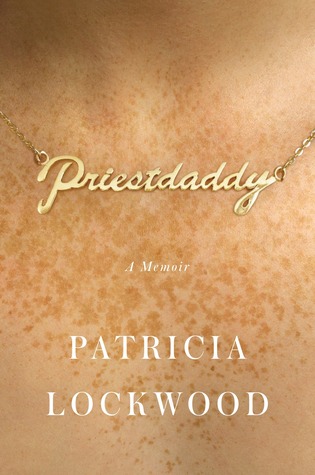 Publisher's Blurb:
The childhood of Patricia Lockwood, the poet dubbed "The Smutty-Metaphor Queen of Lawrence, Kansas" by The New York Times, was unusual in many respects. There was the location: an impoverished, nuclear waste-riddled area of the American Midwest. There was her mother, a woman who speaks almost entirely in strange koans and warnings of impending danger. Above all, there was her gun-toting, guitar-riffing, frequently semi-naked father, who underwent a religious conversion on a submarine and discovered a loophole which saw him approved for the Catholic priesthood by the future Pope Benedict XVI - despite already having a wife and children.

When the expense of a medical procedure forces the 30-year-old Patricia to move back in with her parents, husband in tow, she must learn to live again with her family's simmering madness, and to reckon with the dark side of a childhood spent in the bosom of the Catholic Church. Told with the comic sensibility of a brasher, bluer Waugh or Wodehouse, this is at the same time a lyrical and affecting story of how, having ventured into the underworld, we can emerge with our levity and our sense of justice intact.
My Review:
I got this book from the library on the recommendation of a friend, and while it was not my usual reading, it was a good recommendation. Lockwood's language is highly visual, and that nick-name in the blurb is justified, but she made me laugh, as well as cringe.
Having to move back home as a married woman of 30 has to be hard for anyone, but it is particularly weird for Lockwood. Her father is a Catholic priest, and (as far as I can tell) a red-necked good-old-boy to the Nth degree. Where many people might just crawl into their shells and mope, or get into endless fights with parents whose belief system is so completely antithetical to their own, Lockwood takes a course that makes total sense to me: she begins to write a memoir of her childhood and her parents, observing and making notes on everything they say and do. It becomes more and more clear over the course of the book that Lockwood is moderately messed up in her own head, and that it's pretty easy to blame her parents. She manages to resist this urge to an admirable degree, and the book is remarkably non-judgemental.
You might wonder how the child of such religious parents gets so far out the other end of the spectrum, but I know myself that the children of preachers tend to either become preachers or atheists (we have both in my family), so in a way it makes perfect sense. And maybe it's partly that unreal world she's raised in that makes Lockwood think she can make a living as a poet (a poor bet, though at the time of writing the book she was starting to make progress, and I'm sure the memoir helped the bottom line). Even in her prose, Lockwood's roots as a poet show, and while sometimes the language slips over the top into too-arty (or too dirty), most of the time it works. I kept reading for both the outrageous story and the outrageous language.
My Recommendation:
I will recommend this, but not for the easily offended, either by naughty language or by irreligion. In fact, I think Lockwood treats her parents' Catholicism with a fair level of respect, but there is no denying it's also under scrutiny, and Lockwood doesn't hide her own feelings. The narrow-minded will almost certainly consider some parts of the book blasphemous.


FTC Disclosure: I checked Priestdaddy out of my library, and received nothing from the writer or publisher for my honest review. The opinions expressed are my own and those of no one else. I am disclosing this in accordance with the Federal Trade Commission's 16 CFR, Part 255: "Guides Concerning the Use of Endorsements and Testimonials in Advertising."
book review memoir poetry religion