- August 29, 2018
Okay, that doesn't alliterate, but I wanted to finish up my trip report and still participate in Flashback Friday this week, so here it is!

When last seen, we were high up along Picket Creek, working our way down out of the Kaweah Basin. We pick up our story on Day 7.


Another day, another gorgeous morning in the mountains! That's pretty much how it went, and usually does if you're willing to get up early enough. We enjoyed a view up the valley to Picket Guard Peak, ate our breakfast, and began what we expected to be a moderately long day. 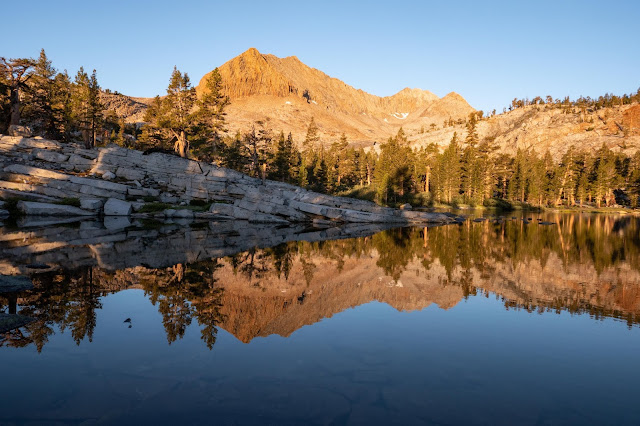 The creek expanded and contracted in a maze of rocks and water that almost rose to the rank of "lake," all of it evidence of the glaciers that passed through long ago.
Not far downstream we came on a lake in about a perfect setting. We kind of wished we'd gone a little farther the day before. 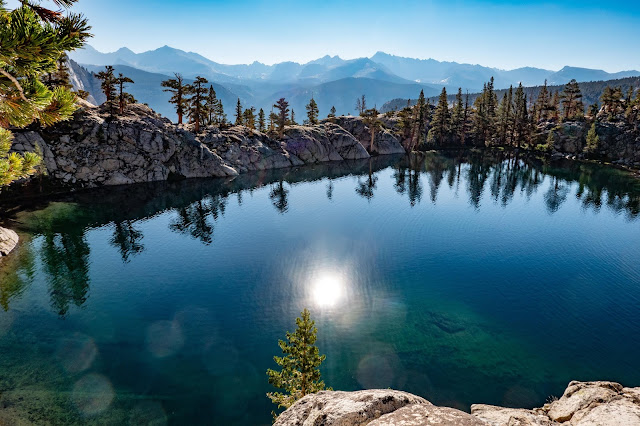 From the far rim of the lake, we could see where we needed to go.
We spent an hour picking our way down the slopes, never too steep to be easily hiked, as long as you chose the right route between the rock bands and cliffy bits. We hit bottom well upstream from our crossing 4 days before, and waded the creek.
Our trail back to the Kern River took us through the one really great flower garden of the trip before climbing past our 3rd camp and back onto the dry slopes.
When we got back to Junction Meadows at the Kern River crossing, we had the moment that changed our trip from 9 nights to 8. We'd left a day's food in the bear box there, bagged and labeled to show we'd come back for it, but when we returned... the box was empty. (We learned later that you aren't supposed to cache food in the boxes, but the ranger assured us she hadn't removed it. We'll never know who did, or why, but I have chosen to believe that someone was short of food and saw it as a small personal miracle). 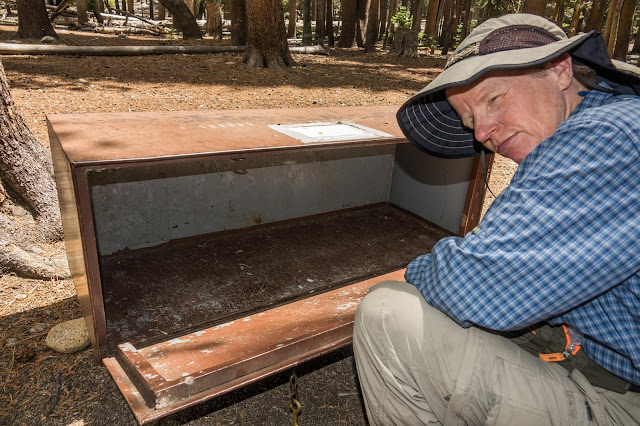 We discussed the situation, and decided that although there were shorter routes out, we would stick with our plan, and simply add extra miles to the next 2 days' hikes. In the end, we did something like 11 miles that day. From here, however, my photos become scarce. On our way back up the Kern River, I got overconfident on the crossing of Tyndall Creek, slipped off a rock (I blame it on legs shorter than my husband's, though it may have more to do with a certain lack of grace), and landed in water up to my right hip. This flooded the camera bag a wear around my waist--and I'd been in too much of a hurry, or too over-confident, to bag my camera properly. So from here, the photos are either his, or ones I took with his camera.

We'd pulled into camp the latest of any day so far, and yet somehow still managed to just have time to bathe before the rain (and hail) started! Not much drying that night, but in the morning, the sun lit up the grassy lake where we'd chosen to stop, and we took the time to dry some gear.
Not far beyond camp, we broke out of the trees and found ourselves on a divide with fantastic views. Not sure we'd have wanted to hike another mile the previous night, but there would have been some spectacular campsites if we had!
We soon reached and crossed the John Muir Trail, choosing to cut a corner of the trails by heading cross-country up the open, flat valley back toward Shepherd Pass. After we picked up the trail, we stopped for a water and snack break along an unnamed stream, celebrating 5 days without seeing any other people.
We lunched at the top of the pass, then began the drop to Anvil Camp, just out of sight in the photo below, in the trees. The snowfield that had been intimidating 7 days before was almost completely melted out along the trail now.

The final day of a trip is always just a bit of... ending. The hike was still substantial (8.5 miles), but it's funny how we manage to knock off the last day's mileage so fast, with an eye on lunch. What we did find on the way out was that the storms had obviously dumped a lot on the area (we learned after we got out that various roads up and down the eastern Sierra were washed out and/or slid on; fortunately our trailhead wasn't one of them!). We crossed a number of spots like this that weren't there on the way up.
Made it to the van before noon!
By the time we had showered and driven back to Bishop, it was a pretty late lunch, but we enjoyed every bite of non-health-food at the Bishop Burger Barn.
A trip like that doesn't end at the trailhead, or even the Burger Barn. We were still 8 hours from home, so we bought dinner fixings and headed out. The Ferguson Fire near Yosemite had forced evacuation of the Yosemite Valley that day (as we learned when we turned on the radio), so we had to scratch our intention to drive back via the Park--the smoke was thick, and we expected the traffic might be thicker. Instead, we drove over Sonora Pass (as it turned out, only a few days before that area developed its own fire problems, but we had clean air and surprisingly little traffic. We camped just down the west side, and were home by noon the next day, driving across the Central Valley in 100-degree temperatures, which were only relieved a couple of miles from home when we drove back into the fog.
Thanks for riding along on our trip to the Kaweah Basin, and for your patience with all the photos and the blather :)  I hope to get back to posting flash fiction soon, though we are now driving across the country, so I will have photos to keep sharing.