- August 10, 2018
I'm finally ready to start my trip report on our recent backpacking extravaganza, 9 days into the Kaweah Basin in Sequoia National Park.

The trip really began back in 2015, when my husband, Eldest Son, and I backpacked out of Mineral King in Sequoia NP. Midway down that trip report is a picture of the Kaweah Peaks, one jagged and intriguing crest. I'm not sure how we got from "those are impressive peaks" to "I hear there's an amazing basin on the other side of those peaks," but we did, and found a couple of on-line accounts of accessing the (trail-less) basin. Thus was a plan begun, but until this summer we didn't have the two-week time block we needed to acclimatize and tackle what we would want to do as a 9-10 day trip.

Fast-forward to July, 2018. My husband retired, I quit work, and we had the time to train and to do the trip right. I shared some of our acclimatization activities here. Now we had 10 days food, and a plan to enter the Sierra via Shepherd Pass (out of Independence, CA, in the Owens Valley), cross the crest, drop down to the Kern River, and climb back up to the Kaweah Basin from the east. That approach, while long and involving some off-trail route-finding, doesn't involve finding a route across the jagged Kaweah Crest, which was a good thing.

Ten days' food is a lot (I got it to a hair over 1.5 lbs/person/day, so you can do the math). Because of that, our trip actually began 3 days before our start date when we loaded up most of our gear, hauled it 6 1/2 miles into the mountains, and cached it. Thanks to that effort (which was also good training!), when we started at sunrise on July 17 our packs were small. That was nice, because the first day's hike to camp was 8 1/2 miles, with 4400' of climbing (and about 500' of descending as you pass from one creek drainage to another). The final mile or two, after we collected our gear, told us how hard it would have been to have carried everything the whole way--we estimate that for those 2 miles pack weights were 40 lbs or more. Once upon a time, that was normal, but we aren't in our 20s anymore.

We camped at the trailhead, putting ourselves in position to start our hike almost as soon as the sun was up. I'm ready to hit the trail at 6:30 a.m., hoping to beat the (not insignificant) heat.
On both our earlier gear-haul and the first day of the trip we took advantage of the final creek crossing (before beginning a 2000'+ climb out of Symes Creek) to fill our hats as well as our water bags with cold water. 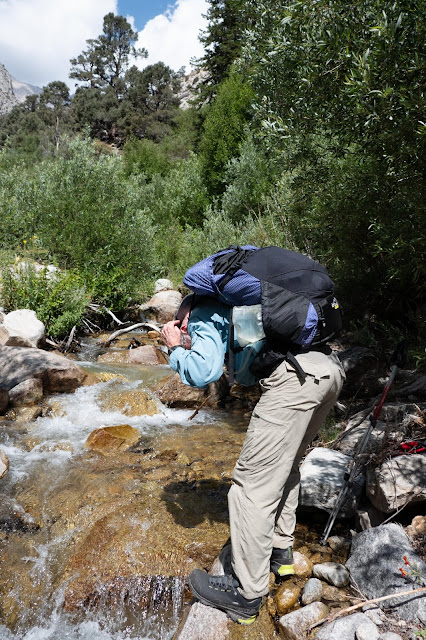 The climb was long and grueling, but long views and near alike helped make it feel like an outing rather than a slog.
High above the Owens Valley, which was already showing signs of smoke impacts from assorted CA wildfires. Happily, we were never affected by any of the smoke. 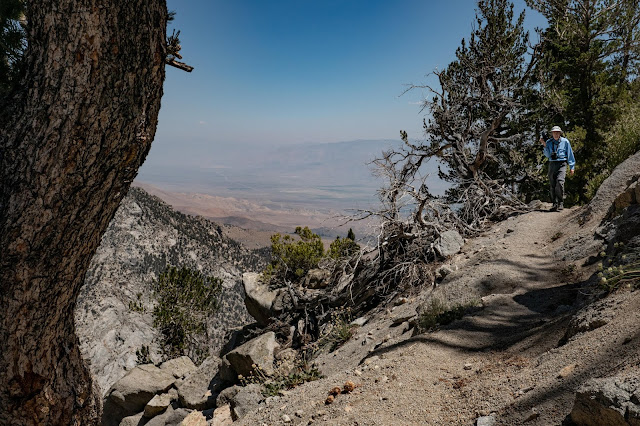 Thanks to some extra stops it took us until lunchtime to cross the divide from Symes Creek to Shepherd Creek. Now we can see where we're going, though the pass is out of sight around to the left.
The climb took most of the day, what with the extras (including time to pick up, sort, and pack the rest of our gear several hundred feet below "Anvil Camp," one of only 2 or maybe 3 camping places along the 10-mile, 6000' climb to the pass). Always nice after a hike like that to have a hearty dinner. I put in the work at home, and in camp my cooking is purely of the "add water" variety. In this case, also "add salmon." Thanks to Teresa Dicentra Black for her fantastic cookbooks!
Camp felt like we were perched at the top of the world, but the next morning we kept going up.
And higher! 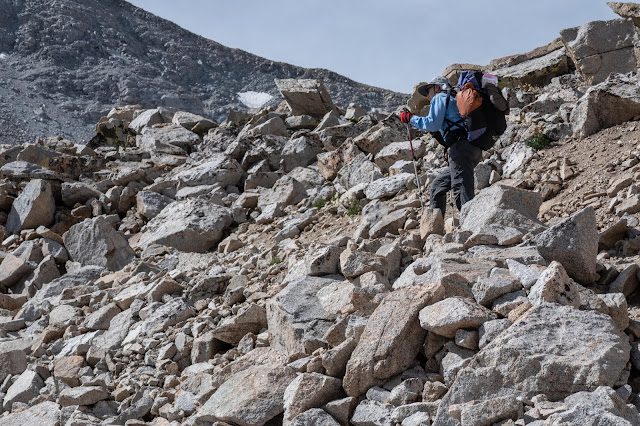 Finally seeing the pass. We know we have to cross the top of that snowfield, and we've heard stories. 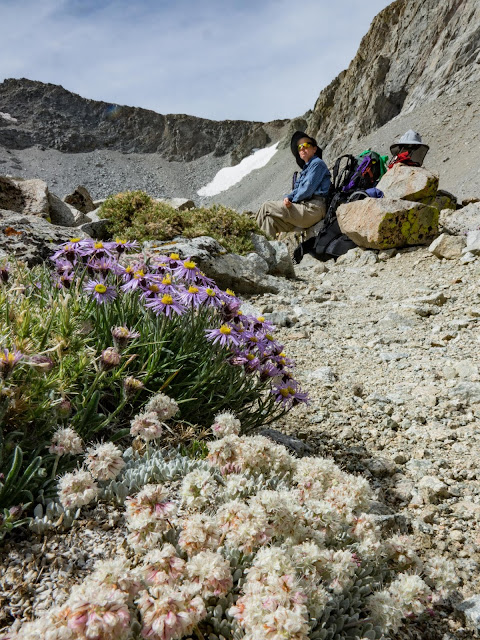 Apologies to the squeamish for the next photo. I'll leave it small so you don't have to see too much. Last  November an unusually heavy early snowstorm caught deer herds on the wrong side of the Sierra crest (they graze well into the mountains in summer, but winter in the Owens Valley). It dumped a lot of snow and ice, and when the deer tried to cross the pass many fell to their deaths. The evidence remains at the base of the more or less permanent snowfield. Assorted predators and scavengers have reduced the evidence pretty much to bones and hair.
And, of course, we had to cross the snowfield. We'd been hearing from hikers coming down, with opinions ranging from "scary" and "kinda sketchy" to "no problem." We expected to find it somewhere in between, but by the time we got there the snow was soft in the mid-day sun, and though we stepped carefully it felt safe. 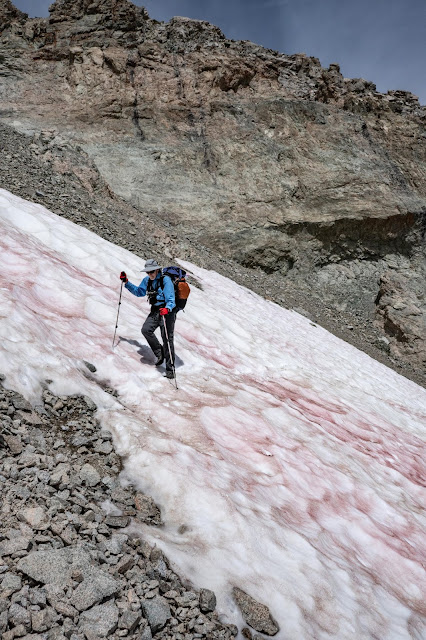 We reached the pass in time for lunch, and launched ourselves into the Park. For the record, when we got our wilderness permit, they issued two--one for the National Forest (east of the pass) and one for the National Park (west of the divide), but we were able to get both at the same place (the Bishop Ranger Station). 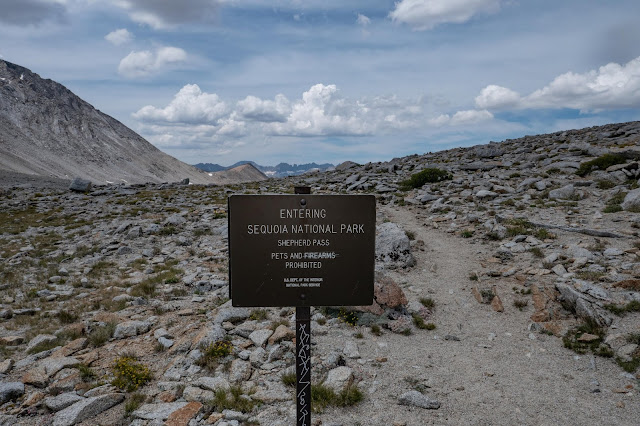 Lunch was sometimes crackers and peanut butter, with other munchies, and sometimes hearty main-dish salads I'd made and dried at home, then rehydrated in my pack all morning. Those proved to be really tasty and filling, and I'll be doing more of them! Either way, we got mixed nuts for trail snacks, and chocolate to top off our lunch.
Watch this space on Fridays for the rest of the trip--the scenery just gets better.