Photo Friday: Into the Kaweah Basin

Last week, I shared the beginning of our 9-day backpacking trip into the Kaweah Basin in Sequoia NP. This week, I'll take us into the middle of the trip, and the middle of the basin. Give me a couple more weeks to get through the trip, because the scenery was amazing, and it's hard to pick just a few photos to share here.

We left off in the middle of the second day of the trip, as we entered the National Park at 12,000' Shepherd Pass.
Still dropping from the pass. We have to descend to the confluence of the deep valleys in the center of the photo, then climb up the valley to the right, and up to the basin below the dark peaks. 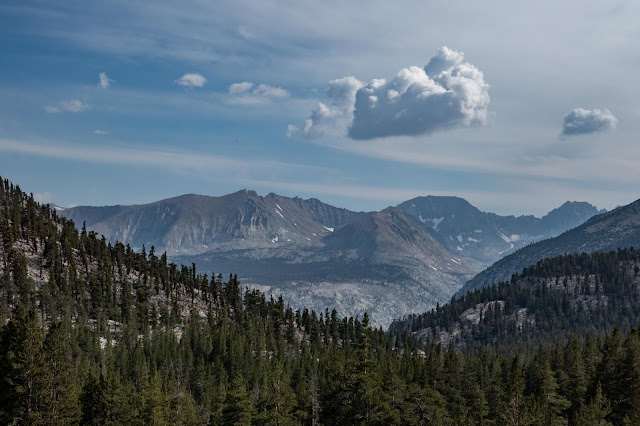 We found more than one old cabin, probably reminders that before the area was a National Park, miners and sheep herders wandered everywhere. This cabin had a new door with new hinges, and we wondered if the Park Service used it in some way. We initially camped next to the cabin, as it was starting to rain fairly heavily. It was a poor site, with no views and no breeze, meaning plenty of mosquitoes. 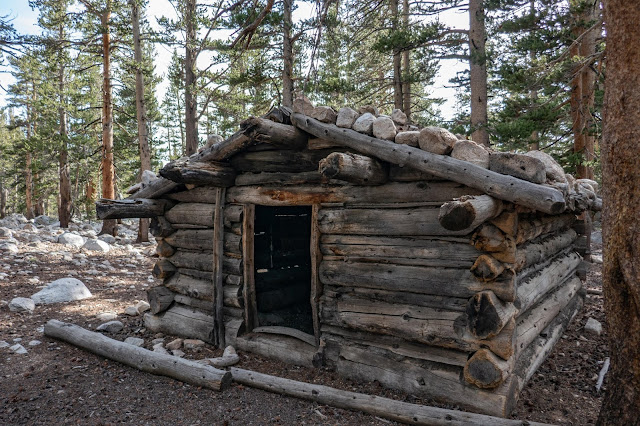 After the rain ended, we went for a little walk and found this spot only a couple of minutes away. With views and an open field and few mosquitoes (at least until after sundown), we decided it was worth the effort of moving our camp.

Our camp was located on the unmaintained Tyndall Creek trail, a direct route between the PCT/John Muir Trails and the Kern River. In the morning we continued the descent. The trail was pretty easy to follow, but the final descent was definitely steep.
The Kern River trail wasn't exactly a heavily-used route, and we had to hunt a bit to find a safe (or at least dry) crossing of Tyndall Creek (of which more in a future installment).
By late morning we hit our low point (aside from the trailhead), about 8000' at Junction Meadows on the Kern River. At this point it's a beautiful, clear, slow-moving river, though not far upstream it was raging in the canyon far below the trail.
Before beginning the hot climb up the Kern-Kaweah River we had to cross the Kern. Fortunately, the trail goes through an avalanche zone where the river is braided into at least 3 streams, and though changing our shoes was minor hassle, the water felt great on our feet and didn't wet us above the knees.
We went too far looking for the perfect spot, and had to backtrack a quarter mile to find a perch with room for our tent above "Rockslide Lake" in the narrow canyon. In the morning we'll cross the stream and make our way up a side canyon into the Kaweah Basin. Meanwhile, I always enjoy a room with a view. 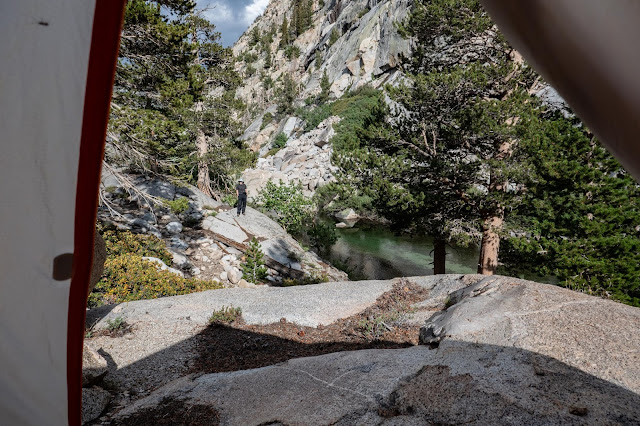 An important part of our afternoon ritual on arriving in camp is the bath and laundry. Unless air and water are both icy, we go for full immersion whenever possible.

Day 4: Into the Basin

The next morning we began the climb up the unnamed creek that drains the Kaweah Basin (we called it Kaweah Creek, but it is not to be confused with the Kaweah River, which runs on the west side of the range, or the Kern-Kaweah River, which ran down from Colby Pass and which we crossed to being our climb).
It only took an hour or so to reach the first lake on the way into the basin, but we knew we wouldn't really be there until we crossed the rim by the waterfall.
Topped out the waterfall, and we knew we had arrived. We still had a fair way to go to get to the heart of the basin, but this spot was so perfect we had to stop and absorb it for a while.
By the time we reached the general area where we wanted to stop, it was getting urgent to make camp. The light afternoon rains of the previous two days were clearly going to give way to a more serious thunderstorm. We managed to get our baths just in time to dive into the tent as the storm hit, the first of 4 consecutive afternoons where we got hailed on.
After the storm, as it did every afternoon, the sun came out and the sky cleared (though each day it cleared later than the one before, so we didn't always get this lovely light). A little exploration revealed a tarn perfect for evening reflections.
Next week, we'll delve into the heart of the Basin, climb to 12,800', and then begin the return journey.