Photo Friday: The Heart of the Kaweah (Part III)

- August 24, 2018
When last seen, we had made our way into the Kaweah Basin, though not by too far, and camped near the upper edge of the trees. Let us resume our journey.

By this stage of the trip we were in a pretty regular routine of crashing between 9:30 and 10 (whenever we could no longer focus on our books), and getting up about 5:30, in time for sunrise. This was a morning to hurry back to our reflecting pond for more photos in the first magical morning light.
Once we were done with the morning light and our breakfast, we broke camp for our shortest pack-hauling day of the trip. It probably wasn't much over a mile up to the lakes below those snowfields, and a pretty, easy walk to get there.
We had more plans, but made sure our camp was set before dayhiking. This was the true alpine, with no hint of a tree, and only a few hardy flowers. Some people would find it too barren, but look at the view!
Our goal for the day was our high point: Pyra-Queen Col, at 12,840'. This was listed in the Roper Guide to Peaks and Passes as a Class 2 climb, and would have been part of our route if we had done the cross-Sierra trip. The basic route was easy: head to the top of the cirque and find the notch. As it turned out, the correct notch wasn't the obvious one you can see just to the left of the lowest point, but a tinier nick in the cliffs farther to the left. Since we weren't going on through, we probably could have gone to either one, but chose to follow the clear boot-beaten trail to the col.
The snowfields actually were the easiest walking, even going up. You can see that we felt some urgency, watching those clouds gather. We didn't want to be on the ridge when the inevitable storms hit! 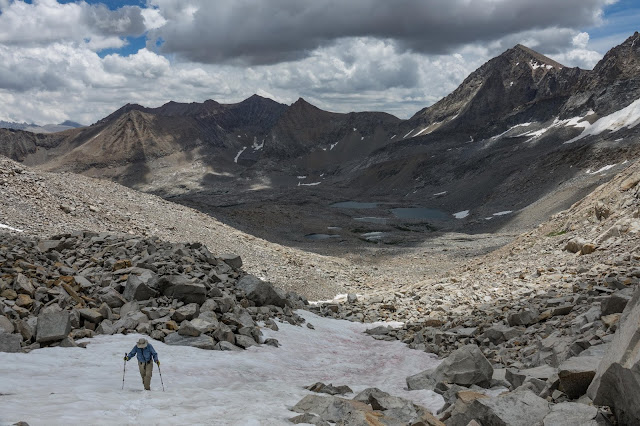 And... we made it to the pass in time for lunch. Even with the storms coming, we needed to take time for that. The actual pass proved to be a tiny notch, maybe 10 feet wide, and cutting through the rocks at an oblique angle, limiting the views to the west. Even more importantly, the west side proved to be very steep, and covered with loose and slippery rocks. We were glad not to be descending it with full packs. 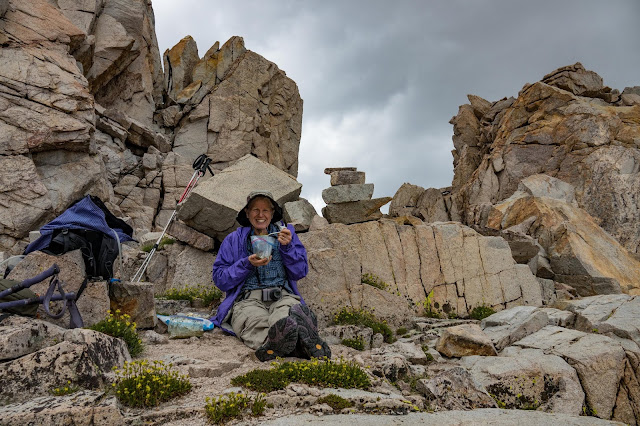 We got our photos, and as the first drops of rain started, we headed down considerably faster than we'd gone up. We got some sprinkles, and some sore knees, but made it to camp not only before the storms hit, but with time for a quick dip in the lake. But when the storms did hit, they were ferocious. Thunder echoed among the peaks until it felt constant, though in fact I don't think any of the lightning was all that close to us. Then we got hit by the solid rain, for the second time. It's nice to be in the tent, wrapped in warm clothes, reading a book while the elements rage outside.
As usual, the storms passed and left calm, though in this case the clouds didn't break up until the sun went down (my meteorologist husband explains that the t-storms are solar-powered, and when the sun goes down, the convection that drives them stops). 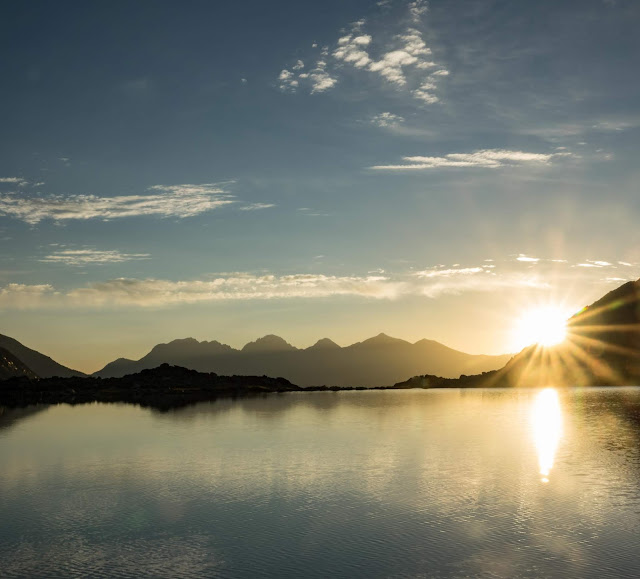 A little more breeze and a few cloud puffs in the morning suggest a change in the weather, but it's a beautiful morning, and we are able to dry the tent and things that got damp the previous night. We called it Tent Henge. After the climb, we had an easy day planned, so took our time and enjoyed the morning right where we were. No need to hurry out of camp when camp looks like this! 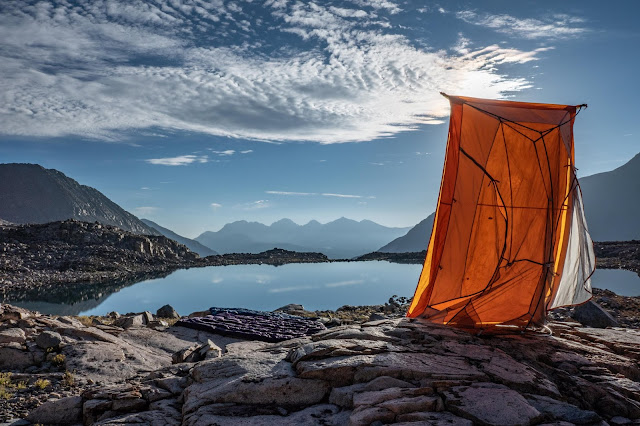 Eventually we began to move, and hiked back down the basin before traversing the north slope to a low saddle, the divide between the Kaweah Basin and the Picket Creek basin. Our reading suggested that it might be easier to descend from that area, and in any case we were in favor of seeing some new terrain.
Even though we were early into camp, we had to race again to beat the storms, and once again got bathed just in time. The hail chased us into the tent--pea-sized hail won't damage anything, but it does hurt when it hits you! 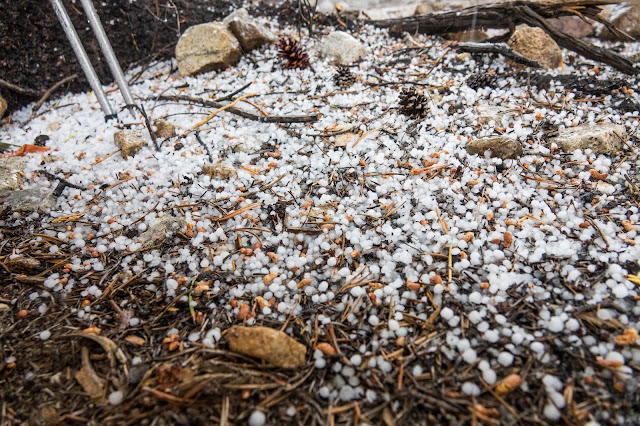 After the storm, the light is better. 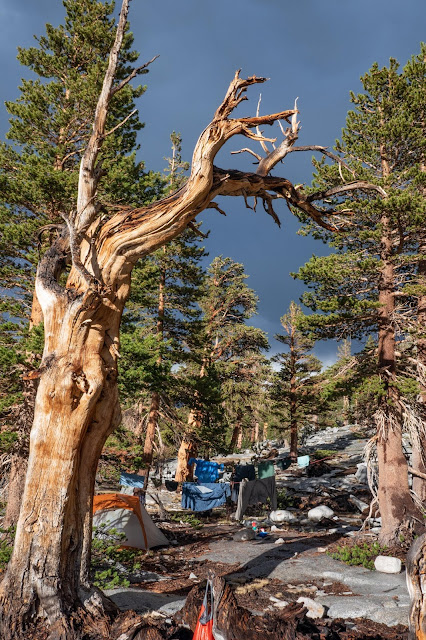 Once again, we were able to come out after the storms (boom! booooooom!) had passed and explore a bit, and once again the late afternoon was completely calm, so that reflections were a keynote of the trip. 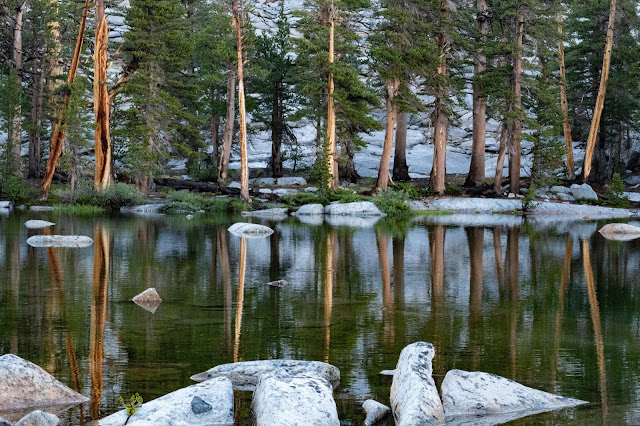 I'll stop with the last light of the day, and finish up next week! There are a lot of miles left, and 2 more nights, but not as many photos.