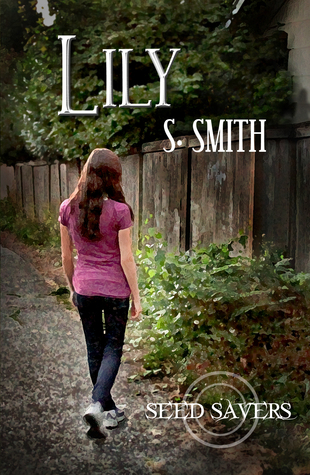 Publisher's Blurb:
It’s definitely not what she had in mind for summer vacation.

When her friends disappear under mysterious circumstances, thirteen-year-old Lily sets out to discover more about the secret organization with which they had become involved. Her investigation unearths a disturbing secret from her own past, unsettling her world even more. In the meantime, Lily makes a new friend and falls for a mysterious young man, even as she remains unsure about whom she should trust. As her world crashes down around her, Lily struggles to decide what to do next.

Lily is volume two of the Seed Savers series but can easily be read out of order. It is is a suspenseful and reflective book with themes of self-empowerment, trust, acceptance of diversity, gardening, and politics.
My Review:
First: I shared space in the BookElves Anthology, Vol. 1 with S. Smith, so you could say we are connected. But that tenuous connection in no way influenced by review(s) (see my review of the first book, Treasure). Now, the review.

I'm going to start by disagreeing with the final statement of the blurb--these books should be read in order. Yes, this is a complete story on its own, but it will make more sense after the first, and offers some spoilers for the first book (inevitably).

I like the way the author has done this series (so far--I haven't read beyond this, though Book 3 is queued up on my Kindle) by focusing on different kids, friends and connected, but each with her own story. So this follows on Treasure, but doesn't actually continue Clare and Dante's story (I took a peek at the next book and I think that we may get back to them there). That does make each book stand alone, though as noted I think it's better to read in order.

What I'm less sure about is the strength of the story itself. There is an underlying tension because what Lily is doing with plants is illegal, but I admit I spent most of the book waiting for something to happen. The peril in this book is very gentle, suitable for young readers but probably a bit too gentle for the older elementary or middle-school kids who would better understand the message about food and government control. There is an interest in the revelations about Lily's family, but that isn't built up much--it just happens, and I wanted something more.

In fact, the most terrifying aspect of this dystopia is that 6 years have passed since it was published, and we are only moving closer to the author's vision of an authoritarian government, though the anti-corporate-food movement is still strong, at least in California. But the general lack of understanding of where food actually comes from rings all too true for far too many people.

Now, having looked at my review of the first in the series, I'm taking a minute here to think about why my reaction to this one was more lukewarm. Yes, I took issue with some aspect of Treasure, but I thought the story was strong and exciting. In this case, it just doesn't measure up. It's good, but I think I have to stick by my "medium" rating (I don't use stars on this blog, but you get the picture).
My Recommendation:
I think this series is important, because it's a dystopia that's all too easy to imagine actually happening. But I suspect the book will have trouble competing with Harry Potter and The Hunger Games, though in fact it's aimed at younger readers than those (but we all know that the little ones are reading those books, and there's been a lot of escalation of story expectations in children's lit). It will make any reader want to learn more about gardening and cooking, though!

FTC Disclosure: I can no longer remember if I bought the Seed Savers Trilogy, or got it as a free book on a give-away, but either way I received nothing from the writer or publisher for my honest review. The opinions expressed are my own and those of no one else. I am disclosing this in accordance with the Federal Trade Commission's 16 CFR, Part 255: "Guides Concerning the Use of Endorsements and Testimonials in Advertising."
book review children's fantasy dystopian stories food middle grade books