- June 01, 2018
A couple of weeks ago we drove up to Grass Valley, CA (no jokes, now. At least, no until you realize that CA not only has Grass Valley but also Weed. Some jokes just make themselves) to ride the Gold Country Challenge Century. It's a new ride--this was only the 5th year--so it's not big, but it was worthwhile. It's also a fundraiser for the local Rotary Club, so about 30% of the entry cost goes to local projects (the rest goes to the costs of putting it on).

The Gold Country is the Sierra foothills (west side), and my Ninja Librarian books are set in a town that would be something like the little places on the higher end of the area.

A few stats on the course: it is 98 miles, and every bit of it is either up or down, for a total of 9600' of climbing (or more, or less, depending on the mapping software you use). That total had me pretty intimidated, but in fact none of the hills was as steep or as long as many we ride routinely, so I wasn't as slow as I feared. It was hard, though, to be over 90 miles and still hitting hills (see below).

I had to borrow more photos than usual from my husband, since he does a better job of photographing these things than I do. I get a bit single-minded.
We always like to take before and after shots. This is before. It was about 6:15 a.m., at almost 2500', so though the day would get plenty warm, it was chilly to start.
Started off with a little tour of Grass Valley. It's a cute town with a historic downtown, just a little depressed-looking.
The scenery was mostly fantastic, and with the hills, we were going slowly enough to appreciate the flowers, especially some expansive displays of purple lupine. 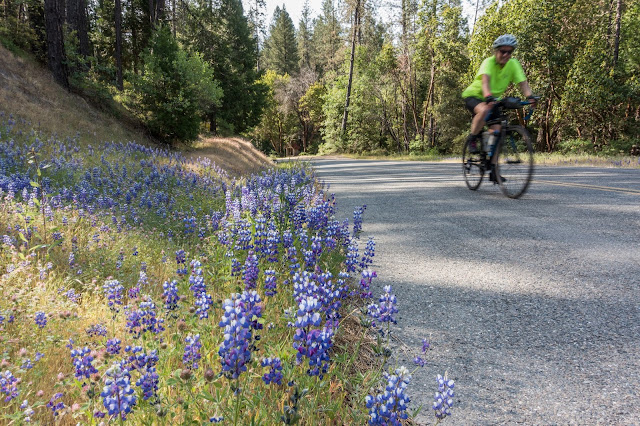 Our first major river crossing.
This covered bridge spans the Yuba River. We crossed the South Yuba once, and the Yuba 3 times (twice in the same spot on the northern loop). Each crossing required a long drop and an equally long climb, but they were scenic highlights. This one felt remote, coming after a single-lane winding descent. 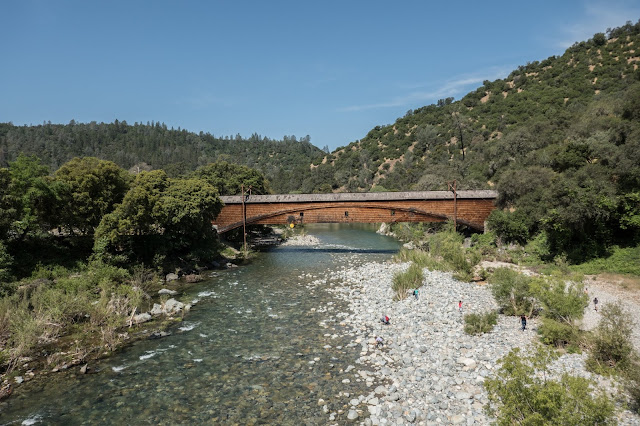 Rest stops roughly every 20 miles kept us fueled. The selection wasn't up to the standards set by the Chico Wildflower Century, but it was good and it was plentiful. I've heard of rides where it was nothing but PB&J sandwiches every time, so it could have been much worse.
The lunch crew was adorable. They took their work seriously, and fed us well.
The final 20 miles or so ran through some really pretty woodlands, winding up and down and up and down and up and down... you get the picture. 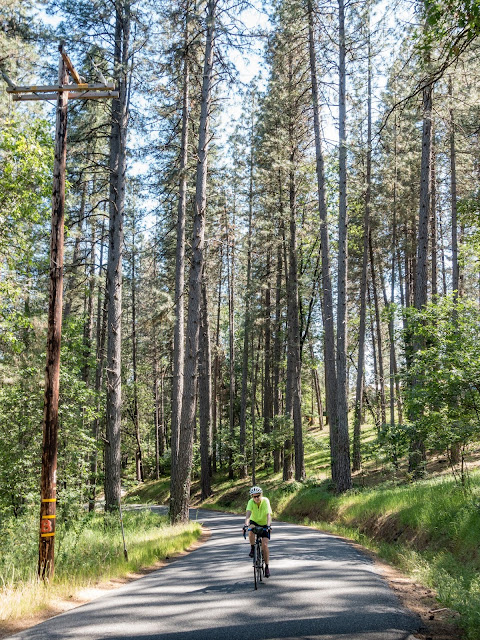 It was while riding this stretch that I wrote the following in my head, later typing it into my phone. It kept me from thinking so much about what hurt, or maybe just helped me keep a sense of humor about it as each hill disappointed me when I though I might be done with climbing. I gave it a proper  title a la the Romantic poets. Read it in an excessively dramatic voice with meaningful pauses. (My apologies if anyone is offended by a few naughty words).

I sweat, and I want my dinner.
The geography is unkind.
The sweat drips from my nose
and again there is a hill.
My butt hurts.


Final ride time (for me; my husband was about 15 minutes faster due to being better at hills than I am): 7 hours, 32 minutes.

And still able to smile.
My Recommendation:
This was a good century. Rest stops were frequent enough, the food adequate, and the BBQ dinner more than adequate. The scenery was excellent, and the only real drawback were a couple of more heavily-traveled stretches of road where locals in large trucks and SUVs were unwilling to give cyclists adequate space. Grass Valley is a cute town and worth the visit. We found a great place to stay through Air B&B, cheap enough to allow us to stay 2 nights (thanks Ed & Louise!). The climbing does make it not a ride for the untrained, but if you've done some centuries and want a bigger challenge (but aren't up for a double), it's a good choice.


Oh, and in case anyone wonders, the usual disclaimers apply: this is my opinion and not that of anyone else, and no one paid me anything to offer it.