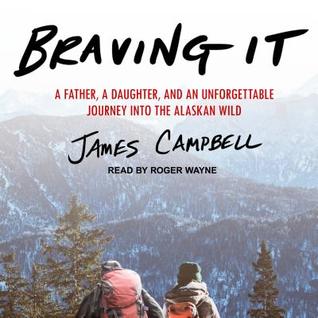 Publisher's Blurb:
The powerful and affirming story of a father's journey with his teenage daughter to the far reaches of Alaska

Alaska's Arctic National Wildlife Refuge, home to only a handful of people, is a harsh and lonely place. So when James Campbell's cousin Heimo Korth asked him to spend a summer building a cabin in the rugged Interior, Campbell hesitated about inviting his fifteen-year-old daughter, Aidan, to join him: Would she be able to withstand clouds of mosquitoes, the threat of grizzlies, bathing in an ice-cold river, and hours of grueling labor peeling and hauling logs?

But once there, Aidan embraced the wild. She even agreed to return a few months later to help the Korths work their traplines and hunt for caribou and moose. Despite windchills of 50 degrees below zero, father and daughter ventured out daily to track, hunt, and trap. Under the supervision of Edna, Heimo's Yupik Eskimo wife, Aidan grew more confident in the woods.

Campbell knew that in traditional Eskimo cultures, some daughters earned a rite of passage usually reserved for young men. So he decided to take Aidan back to Alaska one final time before she left home. It would be their third and most ambitious trip, backpacking over Alaska's Brooks Range to the headwaters of the mighty Hulahula River, where they would assemble a folding canoe and paddle to the Arctic Ocean. The journey would test them, and their relationship, in one of the planet's most remote places: a land of wolves, musk oxen, Dall sheep, golden eagles, and polar bears.

At turns poignant and humorous, Braving It is an ode to America's disappearing wilderness and a profound meditation on what it means for a child to grow up--and a parent to finally, fully let go.

My Review:
This book gets some criticism for feeling at times a bit trivial, or not exciting enough, or even for focusing on the relationship between the author and his daughter (okay, that one puzzled me, since that's what the story is *about*). In some ways, though, the critics are right. This isn't an epic death-defying adventure, though there are moments. The thing is, it doesn't have to be. Maybe it only makes sense to people who spend a lot of time in the wilderness, but to me the details about life in the bush are important. I wanted to know what it was like to build a cabin by hand in the 21st Century. And I sympathized with the misery they all felt at times during that episode. The backpacking and boat trip flow more naturally out of the cabin-building and trap-line experiences that make up the first 2/3 of the book.

I get the criticism, though. The blurb makes it sound like the book is all about the river-running expedition, when in fact it is about a) the things that made it possible for James Campbell to believe his daughter could make that trip, and b) the relationship of father and daughter at a crucial turning point in her life. And maybe I'll add a c: the book is also about the way a wilderness addict is born.

Maybe it's because I'm a parent whose kids are making the shift to adulthood and independence, but I was fascinated by the delicate dance of parenting and freedom that Campbell engages in with his daughter. When he--and she--finally reach the point where he can trust her completely to do the job at hand, it's a triumph for him as much as for her. It's also a point we all have to reach some time with our children. Campbell just had the opportunity to experience it in a concrete, I'm-trusting-you-with-our-lives kind of way. And that's cool. The biggest thing that bothered me was the way Aidan's mom got left out of the growing-up adventures, and the sense that Aidan bonded in a very mother-daughter way with Edna. I'm not sure I could have been gracious about that if it were my daughter.

The writing is solid, with a believable memoir feel (not over-written; some might say it's a little under-written). The audio is excellent, really capturing Campbell's feelings as he recalls the important or scary moments.

My Recommendation:
So this might be a book more for people who are already into the idea (at least) of living in the wilderness than for those just looking for an adventure tale. It's also for parents wondering how you let your kids grow up.

FTC Disclosure: I checked Braving It out of my library, and received nothing from the writer or publisher for my honest review. The opinions expressed are my own and those of no one else. I am disclosing this in accordance with the Federal Trade Commission's 16 CFR, Part 255: "Guides Concerning the Use of Endorsements and Testimonials in Advertising."
Alaskan bush Arctic book review wilderness travel