Non-fiction review: The Meaning of Everything 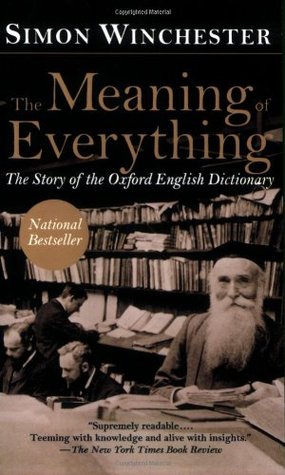 Publisher's Summary:
From the best-selling author of The Professor and the Madman, The Map That Changed the World, and Krakatoa comes a truly wonderful celebration of the English language and of its unrivaled treasure house, the Oxford English Dictionary.

Writing with marvelous brio, Winchester first serves up a lightning history of the English language--"so vast, so sprawling, so wonderfully unwieldy"--and pays homage to the great dictionary makers, from "the irredeemably famous" Samuel Johnson to the "short, pale, smug and boastful" schoolmaster from New Hartford, Noah Webster. He then turns his unmatched talent for story-telling to the making of this most venerable of dictionaries.

In this fast-paced narrative, the reader will discover lively portraits of such key figures as the brilliant but tubercular first editor Herbert Coleridge (grandson of the poet), the colorful, boisterous Frederick Furnivall (who left the project in a shambles), and James Augustus Henry Murray, who spent a half-century bringing the project to fruition. Winchester lovingly describes the nuts-and-bolts of dictionary making--how unexpectedly tricky the dictionary entry for marzipan was, or how fraternity turned out so much longer and monkey so much more ancient than anticipated--and how bondmaid was left out completely, its slips found lurking under a pile of books long after the B-volume had gone to press.

We visit the ugly corrugated iron structure that Murray grandly dubbed the Scriptorium--the Scrippy or the Shed, as locals called it--and meet some of the legion of volunteers, from Fitzedward Hall, a bitter hermit obsessively devoted to the OED, to W. C. Minor, whose story is one of dangerous madness, ineluctable sadness, and ultimate redemption.

The Meaning of Everything is a scintillating account of the creation of the greatest monument ever erected to a living language. Simon Winchester's supple, vigorous prose illuminates this dauntingly ambitious project--a seventy-year odyssey to create the grandfather of all word-books, the world's unrivalled uber-dictionary.
My Review:
After that unmercifully long blurb, what's left for me to say? Not to worry: I'll find something, and say it regardless.

I picked this book up at the library book sale because I'm a word nerd and a lover of the OED. I have my own copy of the 2-volume "compact edition," whereby hangs a tale. When I started graduate school and moved in to a shared house in Seattle, one of my housemates saw the massive 2-volume set and laughed at the idea of it being in any way compact. That lasted until I showed her the interior, each page of which contains 4 pages shrunken of the original. (Happily, it came with a magnifying glass). I still love to consult the OED for origins and history of words.

That being said, I was fascinated by the insights into the way my favorite reference work was constructed. I'm not sure anyone by a word nerd would find the book as interesting, though, and the minutiae about the lives of the people involved wore on me as well. The problem here, I think, is that there really wasn't a book's worth of story in the 80-year undertaking. So, while parts of the book were absorbing as Winchester recounted how certain words were tracked down and captured, other parts went on too long (in my opinion) about how certain people fell out over this and that issue.

I will, however, give Winchester credit for making note of the women and people of lower rank who participated in the project, often with little credit, as well as of the sexist assumptions that kept women out of the heart of the book. But the OED did one thing: it moved the making of dictionaries from a sort of gentlemanly pursuit (think Samuel Johnson) into the world of paying jobs, which it needed to be as it absorbed at least one editor for nearly his entire adult life.

My Recommendation:
Read this if you are curious about the way a dictionary is made, or if you are a bit obsessed with words, their meanings, and their histories. Winchester tells a pretty good tale, but this one isn't as readable as some of his other books.

FTC Disclosure: I bought a second-hand copy of this book, and received nothing from the writer or publisher for my honest review.  The opinions expressed are my own and those of no one else.  I am disclosing this in accordance with the Federal Trade Commission's 16 CFR, Part 255: "Guides Concerning the Use of Endorsements and Testimonials in Advertising."
book review dictionaries history non-fiction OED