Cozy Review: Confessions of a Red Herring--with a visit from the author! 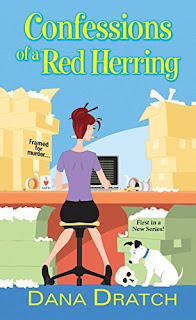 Publisher's Blurb:
As a reporter, she’s used to covering the news. Now she’s the headline.

Alex Vlodnachek has been a reporter for 12 years, a P.R. rep for three months, and a murder suspect for all of 24 hours. When her agency’s double-dealing CEO is stabbed, scheming co-workers cast the new redhead as a compelling red herring. The story is media catnip—especially her salacious nickname: Vlod the Impaler.

Even Alex has to admit she looks guilty.

Out of a job and under suspicion, Alex is running low on cash when she’s visited by a second disaster: her family. Soon her tiny bungalow is bursting with her nearest and not-so-dearest. To keep herself out of jail—and save what’s left of her sanity—Alex returns to her reporting roots. She goes undercover to reclaim her life, break the story, and unmask a murderer. Pretty much in that order.

What she doesn’t know: The killer also has a to-do list.

And Alex is on it.


My Review:
I'll admit I had my doubts about this one at first. Alex seemed to fall into that too-common cozy-mystery category of young woman who can't get her life together. And for a while, it looked like that might be all she was. Then the author cranked up the disasters in her life until I was rolling my eyes.

If you hit that point and want to quit, take my advice: keep going. Right when I was ready to quit, the story grabbed me by the face and I was rolling through it at high speed, laughing at the insane plot and dying to know how it would all come out. So why the slow start? It's not that the book starts off slow--it doesn't. The author jumps right into a wild story. It just took me a while to warm to Alex, I guess. Once I did, the characters began to become real to me, and I wanted more.

I did notice that the book is a bit longer than most first-in-series cozy mysteries, and maybe that led to my feelings that we were spending too long piling up the misery before it began to unravel. It was the point where things began to go right where I really bought into the story, so that's possible. Maybe I was just having a bad week. In any case, after passing the middle, I read the remaining 200+ pages in 2 sittings.

The mystery itself wasn't too hard to figure out, but the author manages to create enough doubt to keep you reading (even aside from the desire to find out what Baba will do next). Alex's decision to root out the truth herself is pretty well justified (though it turns out the police are not being at all incompetent, just not fast enough for her). She needs to put a stop to this both to protect herself and because she is a reporter at heart, and for the most part it works, though there are some things she did that should have gotten her in a lot of trouble.

My take-away: This cozy isn't obsessed with food, with romance, or with handicrafts. As far as I'm concerned, that's a huge plus. There are interesting characters, including the most annoying and adorable puppy ever. The mystery is a little transparent, but it holds together and the story is a blast. Read it!

FTC Disclosure: I received an ARC of Confessions of a Red Herring from Great Escapes Free Book Tours, and received nothing further from the writer or publisher in exchange for my honest review.  The opinions expressed are my own and those of no one else.  I am disclosing this in accordance with the Federal Trade Commission's 16 CFR, Part 255: "Guides Concerning the Use of Endorsements and Testimonials in Advertising."

We are delighted to welcome the author to the Ninja Librarian's blog! She's here to talk about...

Dogs in Detective Fiction
By Dana DratchSome of the best characters in detective stories have four legs.

Just like the real world, dogs in mystery fiction get the characters out of the house and out of their comfort zones. They’re a very real reason to unplug, soak up the natural world – and notice the surroundings. Like that strange car parked at the end of the block. Or a neighbor lurking in a garage not his own.

And in a mystery novel, there’s none better at sniffing out a body. Cats are just as curious, but dogs share what they find. At full volume.

Four-footed sleuths have a proud history in mysteries. Here, in no particular order, are a few of best:

Asta. From Dashiell Hammett’s classic detective novel, “The Thin Man.” In the book, Asta is a female schnauzer.  In the Hollywood movie (starring William Powell and Myrna Loy), he’s a wire-haired fox terrier. What they both have in common: A nose for trouble.

Rowdy, Kimi and Sammy. The three Alaskan malamutes are regular--and crucial--co-stars of Susan Conant’s popular “Dog Lover’s Mysteries” series. If you don’t already suspect that dogs are capable of abstract thought, these three will show you otherwise. (And one anecdote--where Rowdy hides his human’s socks just to gauge her reaction--is borrowed from real life.) These three are smart, funny and exuberant.

Chet. The high-energy co-star of Spencer Quinn’s “Chet and Bernie” mysteries, Chet is the series narrator--which gives readers insight into his peripatetic dog mind. Also known as “Chet the Jet,” he’s the first to admit he’s fast, as well as smart. (And he’s right.) When you hang out with Chet, expect to discover not just how the suspects look and act, but also how they smell.

Scooby-Doo. OK, granted, this one’s a cartoon. But how many of us would love to just hit the road with our dog and a few trusted friends--and maybe solve a mystery or two along the way? (Even if the culprit is usually the creepy caretaker.)

Blanche. A canine character in Jonathan Kellerman’s best-selling “Alex Delaware” series. Unlike her predecessor, Spike, Blanche definitely sees Alex as her No. 1 human. And she has a soft spot for Delaware’s two-legged cop buddy, Milo, who slips her food on the sly. Besides, who can resist a French bulldog who smiles?

Tara. A great four-legged character in David Rosenfelt’s best-selling “Andy Carpenter” series. The fictional Tara, a golden retriever, was inspired by the author’s own dog of the same name. Best of all, she shares her moniker with the author’s real-lifeTara Foundation--which has rescued and placed thousands of dogs. Now that’s a very good girl.


Dana Dratch is the author of CONFESSIONS OF A RED HERRING, which came out May 29. A former newspaper reporter and current personal finance writer, she’s currently writing the sequel, SEEING RED, which has Alex, rescue-pup Lucy, and the whole crazy Vlodnachek family going up against spies, art thieves and a very determined murderer.


And there's more! Join the giveaway for your own copy of the book!
a Rafflecopter giveaway
book review cozy mystery Great Escapes tours reporters