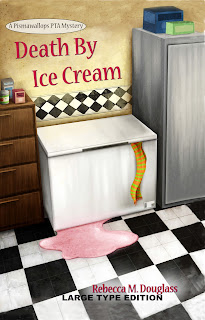 At the request of my mother (and the librarian at the retirement home), I have created a large-print edition of Death By Ice Cream, with more to follow if this one flies. In case others are thinking of doing the same, I thought I'd share what it took.

Cover: In the best of all worlds, you'd probably do a new cover just for the LT book. Since I don't have the funds for that (the more so as I'm dubious about this making the money back), I opted to use my okay Photoshop skills to enlarge the regular cover. Why enlarge? Because to make a LT book work, you probably need to use a larger format, unless you are already at the 6x9" size. Even then you'll need a much wider spine--something I didn't adequately account for when doing this one (I decided it's good enough, though, and am not going to change it).

For the next book, I will probably try taking the separate pieces and enlarging them individually to assemble a proportional cover according to the specs for the size book. I think that will be only slightly more work, and will look more professional. One problem I had here was that there wasn't really space to put the words "Large Type Edition" on the cover, and I ended up having to stretch the bottom of the cover a bit to make room. That resulted in a less-than-optimal design, which a fresh cover design would avoid.

Interior: Here's where you really need to put in some effort. First, I chose to make the book 6x9", which seems to be a pretty standard size for the LT books at our library. That's a bit larger than my usual books, which means that I could get more words on a page. That's important: not only do POD books cost per page, but a super-thick book won't stay open well, and may be heavier and more awkward.

A note here on a limitation we author-publishers using POD printing have: a traditionally published LT book will use thinner, lighter paper to keep the bulk and weight down. We don't have that option.

So here's the nitty-gritty: a book counts as LT if the font is at least 14 points. I thought that wasn't enough (my test is to see if I can read it without my "cheaters"), and used 16 points. Of course, the font you use will make a difference, and here's the thing: a lot of the more popular typefaces aren't great for the visually impaired. The recommendations call for a sans-serif font (without the little extra lines at the bottoms or tops of many letters): APHont, Verdana, Arial, Helvetica (the first is not included with word processors, but is free. I didn't try it). I experimented and found that Arial gave me the lowest page count but still very clear and easy-to-read type.

At least one recommendation I read suggested block type with double-spaces between paragraphs (as this blog post has), but I don't see that in most of the books I looked at, and I didn't do it. But what I *did* do was increase the space between lines, setting it to "at least 20 pts." That really helped readability by creating a little more white space between lines of type so the eye isn't so easily confused.

To reduce the overall length, I took out "extras" in the book, combining a couple of the front-matter pages into one, and adding the "other books" list to the "About the Author" page. I also moved the chapter headers up to just a couple of lines below the top of the page (instead of 1/3 of the way down), and removed the headers so the top margin could be a little higher.

The end result is a book that I think can be much more easily read by someone with limited vision, without being too large and heavy to hold. The page count increased from 291 to 435 for my 82,000 word novel, which still allows me to price it under $20.

Is it worth it? I won't know this for a while. In financial terms, my only investment was time (plus the cost of purchasing a few copies so I have them available for sale when I do talks). So I'm not really out anything if it doesn't sell. But if no one buys it, I may not think it worthwhile to do the other books. On the other hand, maybe I can do some direct marketing to other retirement homes and build a market. With cozy mysteries, older women are a significant part of the market, so taking a little thought for their needs seems worthwhile.

***
In other news: Check out this great trailer for Tick Tock A Stitch in Crime, which will be out on Tuesday!
https://www.youtube.com/watch?v=dnYfD2zPRP0&feature=youtu.be 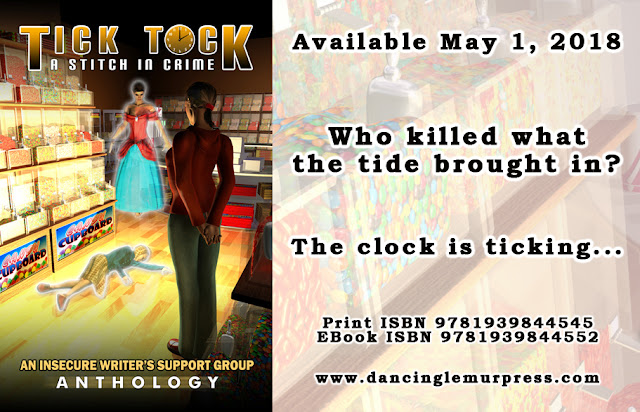