Do you have any idea how many photos you can shoot trying to catch the crashing surf at just the right moment? Editing the photos from our trip to Maui last month has been a challenge, to say the least. I'm still working on the crater, but today we'll drive the Hana Highway... in the rain (because it is a rain forest. Which has that word "rain" in the name for a reason).

For those who missed it, the first part of our trip (a day spent biking around West Maui; did I mention that we don't go on vacation to lie on the beach?) is here. The drive to Hana (and actually on beyond to the coastal part of Haleakala National Park at Kipahulu) was meant to be a recovery day.

We got an early start to beat most of the traffic. The narrow, sort-of-two-lane road to Hana has become a tourist destination, which is too bad, because the road would be perfect for biking if there were no cars! We knew starting out that the day would be wet, and while that made for some discomforts, our first waterfall stop, at Twin Falls, showed us one advantage. The falls were running fast and full (of mud).
The rain only picked up from there, so our stop to explore the bamboo forest (and look for another waterfall) required full rain gear.
Our trail soon dead-ended in a swollen stream, but we found other routes through the bamboo (with some part of my mind wondering if we'd find our way back out). 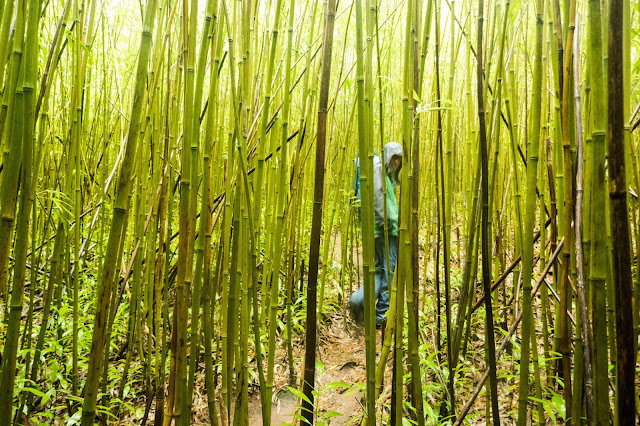 A botanical garden was the next stop, where we were a little disappointed to find the focus was exclusively on plants from *other* parts of the tropics. Still, the Painted Gums (eucalyptus) were beautiful. 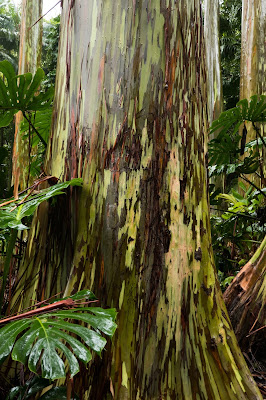 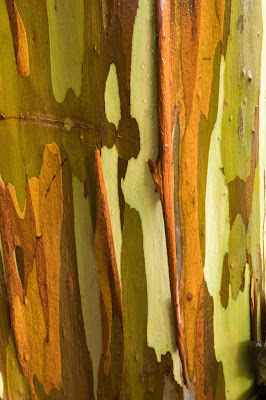 Of course, no exploration of the coast would be much good without shooting 1000 photos trying to capture the crashing surf.

The route was also littered with little fruit-and-snack stands, and we had to try some of the fruits we'd never seen before. To our surprise (we are fruit people), we didn't like the star apples we bought here.
After rounding the corner past Hana (the easternmost point of the island), the rain tapered off, and shortly after we got to the Kipahulu campground the sun came out, changing the feel of everything.
The next day was another waterfall day, including the 4 mile hike to a series of waterfalls in the park.

Start with the Ohe'o pools, and the falls between.
Up the mountain on a generally well-built trail.
Partway up, you pass the falls of Makahiku. Above those, another series of beautiful pools in the dark volcanic rock entices the hiker, but the signs warn you these are not safe places to wade, since the 200' falls are just below.
This is not a tree we would see at home. I'm not sure what it is, but I'm pretty sure it's sentient. 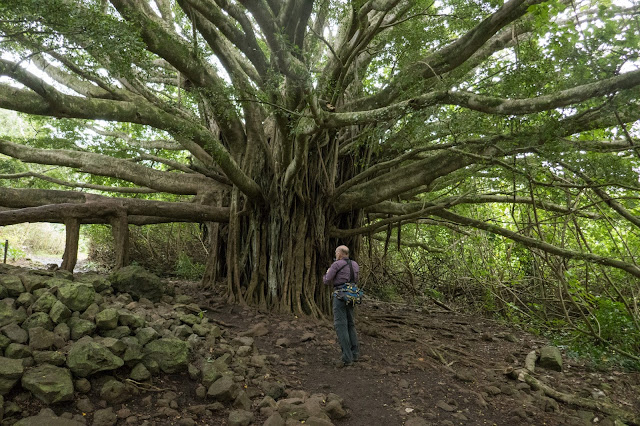 End of the trail--Waimoku Falls. 400' tall, and a very popular destination. We managed to enjoy it in solitude thanks to a very early start, but as we went down, we met a lot of people sweating their way up in the increasingly warm day. 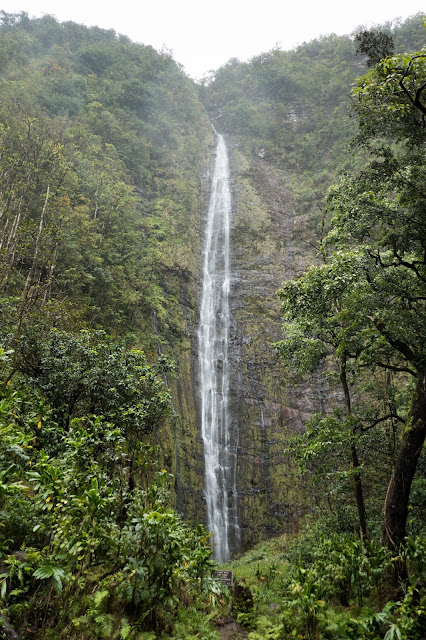 I can't go anywhere without some flower photos. 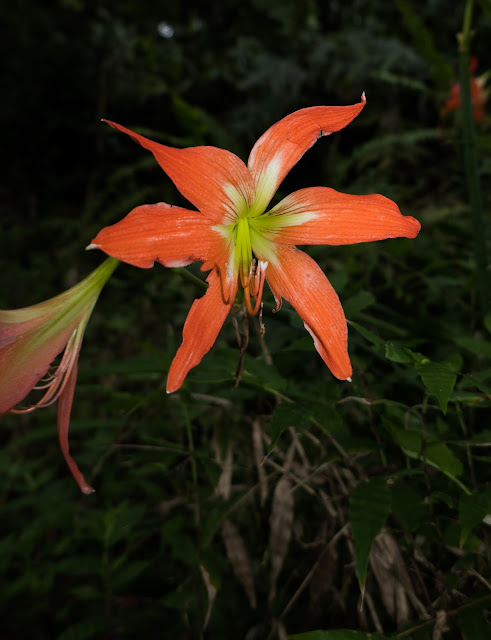 Back to the coast, and all packed up, we went looking for one more waterfall. This time it was sunny, warm, and the water--unlike our Sierra streams--was cool, not cold. The route to the falls wasn't completely obvious, but we found it, and were able to get go for a little swim, and even to get dry, not something we'd been much for the last 3 days.
Back through Hana--and back into the rain, leading us to buy lunch from a food truck purely because that one had covered tables--and on to Waianapanapa State Park. Camping here felt odd at first--the camping area is sort of in the middle of everything, and during the day, people are everywhere so it felt a bit like setting up camp in Grand Central Station.  But we staked our claim, and I have to say the view was great, especially as the rain gave up and visibility improved some.

This was the place to go for mesmerizing surf. 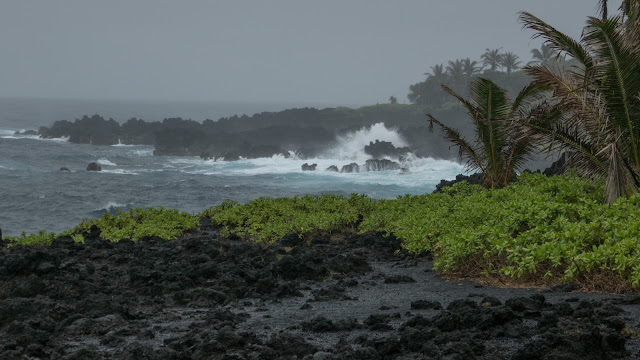 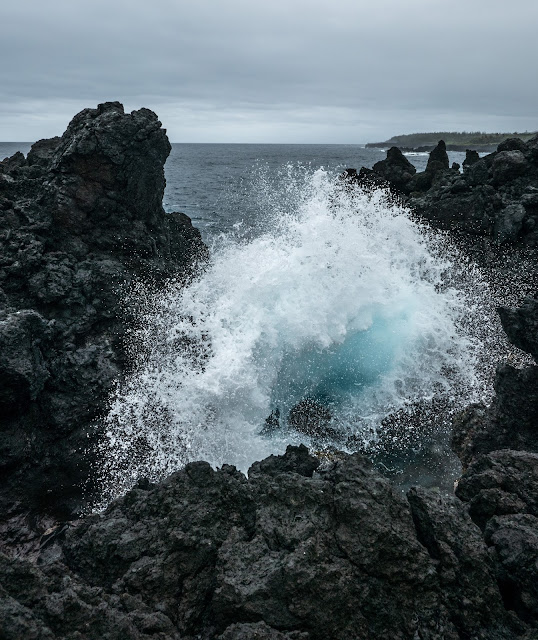 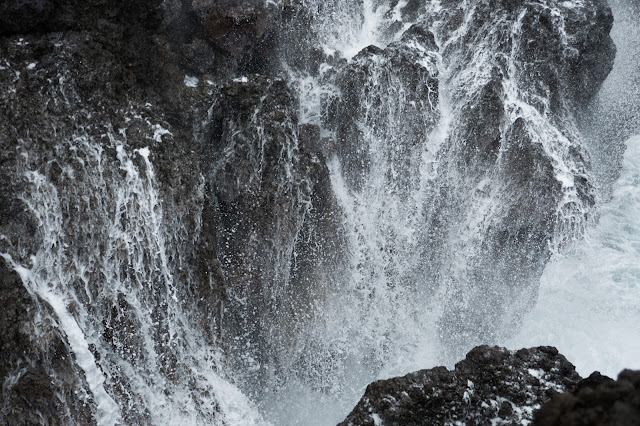 Finally, it wouldn't be right to go without a photo of the sadly abundant mongoose. The mongoose is an invasive animal, brought (I think) in a misguided attempt to control the destructive rats that the ships had brought. Naturally, they find the native birds an easier target, especially the eggs of those that nest on the ground. 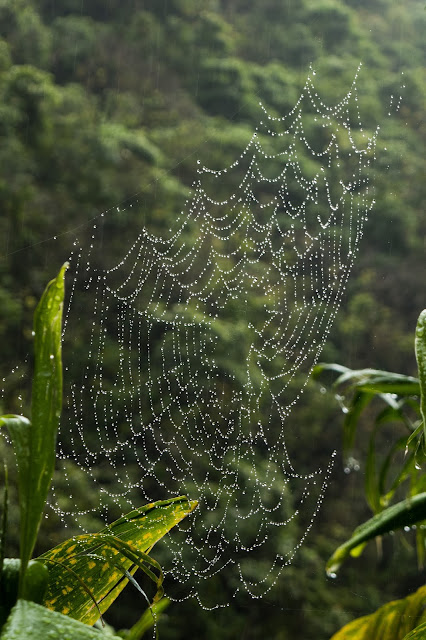