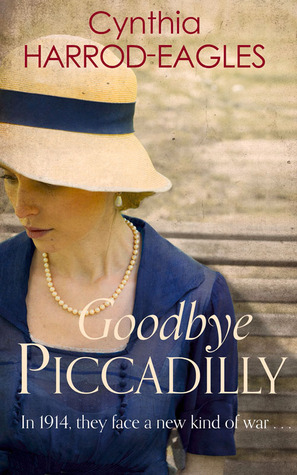 Publisher's Summary:
In 1914, Britain faces a new kind of war. For Edward and Beatrice Hunter, their children, servants and neighbours, life will never be the same again. For David, the eldest, war means a chance to do something noble; but enlisting will break his mother's heart. His sister Diana, nineteen and beautiful, longs for marriage. She has her heart set on Charles Wroughton, son of Earl Wroughton, but Charles will never be allowed to marry a banker's daughter. Below stairs, Cook and Ada, the head housemaid, grow more terrified of German invasion with every newspaper atrocity story. Ethel, under housemaid, can't help herself when it comes to men and now soldiers add to the temptation; yet there's more to this flighty girl than meets the eye.

The once-tranquil village of Northcote reels under an influx of khaki volunteers, wounded soldiers and Belgian refugees. The war is becoming more dangerous and everyone must find a way to adapt to this rapidly changing world. Goodbye Piccadilly is the first book in the War at Home series by Cynthia Harrod-Eagles, author of the much-loved Morland Dynasty novels.

Set against the real events of 1914, Goodbye Piccadilly is extraordinary in scope and imagination and is a compelling introduction to the Hunter family.
My Review:
A later book in the series caught my eye on the New Book shelf at the library, and I'm a sucker for WWI stories, so I decided to take a chance and start the series. Certainly lots of the reviews raved about it, though a few gave me pause.
I should have paid more attention to the negative reviews, because they were right. It's not that this is an awful book. I didn't struggle to finish it. But I never fully engaged with it, either, for several reasons.

The biggest flaw in the book, in my opinion, is that it is trying too hard to do too much. This is the opening salvo of an epic saga, doing its best to do what Downton Abbey does. We are going to track the movements and moods of the extended Hunter family plus a number of their neighbors, their servants...and we do. Unfortunately, not only are there so many characters that it is hard to keep track, but we spend so little time with each in many, many short scenes, that I never developed a lot of feeling for any of them (with the possible exception of Laura, the spinster sister, and Sadie, the 16-year-old who doesn't want to grow up and stop playing with horses).

Those quick glimpses into each person's life may work in Downton Abbey, but in my opinion, they don't here. I would probably have been much more engaged, and still able to get a feeling for the whole community, if the author had kept the focus on two or three characters, and let us see the rest through their eyes. As it is, no one is developed enough to be interesting, and the omniscient narrator tells us too much--no one is going to surprise us. At the same time, I have no real sense of anyone's interior. How does Diana know she's in love, not just fortune-hunting? Nothing that happens or that we see of her makes me believe that she loves her suitor, yet Diana insists she does, and the narrator seems to go along with that. I need to be convinced.

Further, much of the historical setting is trying too hard. We get summaries of the causes and progress of the war that read more like a textbook than part of a novel, and while I recognize that some of that is needed for a generation that doesn't know anything about WWI, from a narrative perspective it doesn't work.

In a strange way, I think I've been spoiled by reading children's historical fiction. Those tend to stick to a tight story and a tight view of the main character, whose youth allows the reader to see things she/he can't.  Or maybe I just don't have the patience for a sweeping saga.

My Recommendation:
If you like the period and the style, you may be one of the vast majority of readers who seem to like the books. If you really want to see into the period, though, I think there are better options, though I did learn a thing or two from the historical bits. If you like to see into and understand a few characters well, rather than a sweeping view of a whole village, you may react as I did, with a resounding "meh." (Note: It's not awful. I'll give it 2 stars ["it was ok"] on Goodreads, or even 2.5).

FTC Disclosure: I checked Goodbye Piccadilly out of my library, and received nothing from the writer or publisher for my honest review.  The opinions expressed are my own and those of no one else.  I am disclosing this in accordance with the Federal Trade Commission's 16 CFR, Part 255: "Guides Concerning the Use of Endorsements and Testimonials in Advertising."
book review family sagas historical fiction WWI