Non-Fiction Review: The Reason I Jump 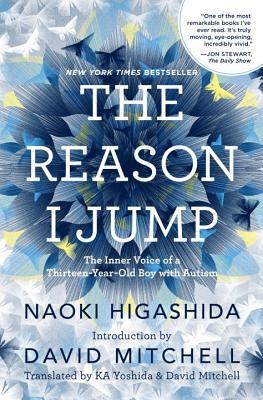 Publisher's Summary:Written by Naoki Higashida, a very smart, very self-aware, and very charming thirteen-year-old boy with autism, it is a one-of-a-kind memoir that demonstrates how an autistic mind thinks, feels, perceives, and responds in ways few of us can imagine. Parents and family members who never thought they could get inside the head of their autistic loved one, at last, have a way to break through to the curious, subtle, and complex life within.

Using an alphabet grid to painstakingly construct words, sentences, and thoughts that he is unable to speak out loud, Naoki answers even the most delicate questions that people want to know. Questions such as: “Why do people with autism talk so loudly and weirdly?” “Why do you line up your toy cars and blocks?” “Why don’t you make eye contact when you’re talking?” and “What’s the reason you jump?” (Naoki’s answer: “When I’m jumping, it’s as if my feelings are going upward to the sky.”) With disarming honesty and a generous heart, Naoki shares his unique point of view on not only autism but life itself. His insights—into the mystery of words, the wonders of laughter, and the elusiveness of memory—are so startling, so strange, and so powerful that you will never look at the world the same way again.


My Review:
I grabbed this book at the library because it sounded like a really interesting way of getting some insight into autism. And in a way, it is. I was a little way in when something about it began to bother me, making me wonder if it was really what it claimed. Sometimes the voice didn't seem quite believable. I looked at reviews, and found a lot of food for thought there. After reading reviews and finishing the book, I saw two issues: the author is trying to speak for all people with autism, and the question of whether his ideas could have come from a 13-year-old.

Most people who know anything about autism spectrum disorders know that you can almost never say "all people with autism..." and not make a fool of yourself. Naoki Higashida, being only 13, can be forgiven for thinking his experience is universal, but I made a mental adjustment and replaced all his "we" statements with "I" statements, because in the end, he's only telling us how he feels (though that insight into his behavior may help to understand other people with autism). To me, it's a non-issue. Most 13-year-olds would probably make the same error.

The bigger issue seems to be whether these are really the author's own ideas. I admit to feeling some doubt on reading some passages that seemed both strange and sophisticated. Higashida also makes a lot of rather odd statements about motivations for odd behaviors. By the time I got to the end of the book, I decided that the author's odd statements are probably his own, the result of spending too much time inside his own head, if you will. I'm impressed that he was able to articulate them, and unsurprised that some answers are bizarre while he was unable to answer other questions at all.

Many reviewers focus their doubt on the bit where he explains autism, or rather his own metaphor for being autistic: "I think that people with autism are born outside the regime of civilization...we are more like travelers from the distant, distant past." I saw reviewers wondering how much of that somewhat poetic language was the work of the translator (I'll never know, but I'm sure there are some bilingual folks who could check), as well as people who didn't believe a kid could come up with the ideas. To me, it sounds exactly like something a kid would come up with, especially a kid with plenty of brains and not much ability to connect and communicate with others. Doesn't every early teen think he/she is an alien from another world, at least occasionally?

In the end, this book bothered me less than it did many people, though I didn't find it all that readable (it's 135 short pages and still took me weeks to get through) for some reason. I saw some things in what he says that make sense, and resonate with my experience with family members on the spectrum. I read other things that I had to shrug and say "well, that's his experience."

My Recommendation:
This book does fill a gap, since most books on autism are either written by adults, either neurotypical or on the spectrum. This one is the kid's view, and is written from a place where he has not yet found a way to function fully in the world, but is old enough to wonder and worry about the need to do so. It's a good reminder that just because a person cannot speak, or speak well, it doesn't mean he does not think, or have plenty of words inside. It's flawed, it's not brilliant, but it is probably worth a look.

FTC Disclosure: I checked The Reason I Jump out of my library, and received nothing from the writer or publisher for my honest review.  The opinions expressed are my own and those of no one else.  I am disclosing this in accordance with the Federal Trade Commission's 16 CFR, Part 255: "Guides Concerning the Use of Endorsements and Testimonials in Advertising."
autism book review memoir