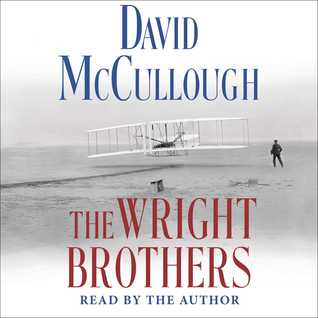 Title: The Wright Brothers
Author: David McCullough. Read by the author.
Publisher: Simon and Schuster Audio, 2015. First published 2015 by Simon and Schuster.
Source:  Library digital resources
Publisher's Blurb:
Two-time winner of the Pulitzer Prize David McCullough tells the dramatic story-behind-the-story about the courageous brothers who taught the world how to fly: Wilbur and Orville Wright.
On December 17, 1903 at Kitty Hawk, North Carolina, Wilbur and Orville Wright’s Wright Flyer became the first powered, heavier-than-air machine to achieve controlled, sustained flight with a pilot aboard. The Age of Flight had begun. How did they do it? And why? David McCullough tells the extraordinary and truly American story of the two brothers who changed the world.
Sons of an itinerant preacher and a mother who died young, Wilbur and Orville Wright grew up in a small side street in Dayton, Ohio, in a house that lacked indoor plumbing and electricity but was filled with books and a love of learning. The brothers ran a bicycle shop that allowed them to earn enough money to pursue their mission in life: flight. In the 1890s flying was beginning to advance beyond the glider stage, but there were major technical challenges that the Wrights were determined to solve. They traveled to North Carolina’s remote Outer Banks to test their plane because there they found three indispensable conditions: constant winds, soft surfaces for landings, and privacy.
Flying was exceedingly dangerous; the Wrights risked their lives every time they flew in the years that followed. Orville nearly died in a crash in 1908, before he was nursed back to health by his sister, Katharine, an unsung and important part of the brothers’ success and of McCullough’s book. Despite their achievement, the Wrights could not convince the US government to take an interest in their plane until after they demonstrated its success in France, where the government instantly understood the importance of their achievement. Now, in this revelatory book, master historian David McCullough draws on nearly 1,000 letters of family correspondence—plus diaries, notebooks, and family scrapbooks in the Library of Congress—to tell the full story of the Wright brothers and their heroic achievement.
My Review:
As so often happens with the audio books I listen to while exercising or doing housework, I didn't know I was interested in this until I checked this out from the library. But I quickly realized that while I'd have said that I knew all about Wilbur and Orville Wright being the first to have a successful powered flight, I didn't actually know much of anything. David McCullough fixed that.
Another thing McCullough fixed was the controversy (of which I was vaguely aware) about some counter claims to the title of "first to fly." I can see where these came from--the Wrights were very private (secretive, if you wish) during the development of their craft, so others did in fact do well-publicized flights before they did. But the private records confirm it: Orville and Wilbur were first.
I enjoyed the book for the detail it provided about the whole process (how many of us assume that they managed that one famous flight at Kitty Hawk and that was it--flight was invented?), the many iterations and adjustments and the constant drive for more, recognizing that their early attempts hadn't produced practical flight. I was also interested in the struggle they had convincing anyone (like the US government) that what they had was worthwhile (no wonder they had to keep working!), and was intrigued by the fact that they were the only ones working on the problem who were self-funded (and they did it all for a tiny fraction of what most others spent).

The impact of fame on their lives was interesting, as well. The essentially private Wilbur was very nearly tempted out of his industrious path and came close, I think, to succumbing to vanity. His own native good sense seemed to pull him up just in time, though he did become a bit of a dandy for a time. And both the men were, I think, a bit out of their depth in the business end of things, and were lucky not to have been truly taken to the cleaners.

The only aspect of the book that bothered me was the reading. It wasn't bad, but I think the author would have done well to let someone else read it. His delivery is just a bit "flat," rather like reading a news report. That does avoid unnecessary and inappropriate drama, but it doesn't make for good listening. [As a note, he did way better than another misguided author-narrator I started at the same time and had to abandon. Someone should tell Sarah Vowell to stick to writing and let someone else read, because I found her voice unlistenable, a bit like the silent movie star in Singing in the Rain.]
My Recommendation:
An interesting piece of history, and like most of the non-fiction I listen to, it would probably be better read as a paper book. (Which raises the question of why I listen to so many NF books, even knowing they are usually better read. I don't have a good answer, except I do get through more of them this way, and a partial grasp of the subject is better than none.)  Anyone interested in the history of aviation has probably already read it, but if you haven't, nab a copy.

FTC Disclosure: I checked The Wright Brothers out of my library, and received nothing from the writer or publisher for my honest review.  The opinions expressed are my own and those of no one else.  I am disclosing this in accordance with the Federal Trade Commission's 16 CFR, Part 255: "Guides Concerning the Use of Endorsements and Testimonials in Advertising."
audio books book review history Wright Brothers