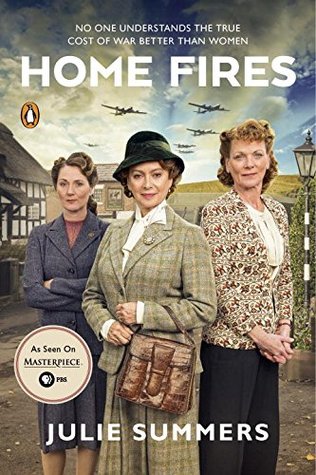 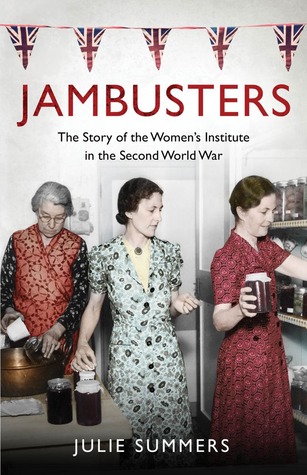 Note: this is the same book. The copy I read is on the left, and reflects a change of title and cover to go with the TV series made from the book. On the right is the original title and cover.
Title: Jambusters [Home Fires]: The Story of the Women's Institute in the Second World War
Author: Julie Summers
Publisher: Simon & Schuster, 2013. 368 pages.
Source: Library

Publisher's Summary:
Away from the frontlines of World War II, in towns and villages across Great Britain, ordinary women were playing a vital role in their country’s war effort. As members of the Women’s Institute, an organization with a presence in a third of Britain’s villages, they ran canteens and knitted garments for troops, collected tons of rosehips and other herbs to replace medicines that couldn’t be imported, and advised the government on issues ranging from evacuee housing to children’s health to postwar reconstruction. But they are best known for making jam: from produce they grew on every available scrap of land, they produced twelve million pounds of jam and preserves to feed a hungry nation.

Home Fires, Julie Summers’s fascinating social history of the Women’s Institute during the war (when its members included the future Queen Elizabeth II along with her mother and grandmother), provides the remarkable and inspiring true story behind the upcoming PBS Masterpiece series that will be sure to delight fans of Call the Midwife and Foyle’s War. Through archival material and interviews with current and former Women’s Institute members, Home Fires gives us an intimate look at life on the home front during World War II.
My Review:
I was torn about this one. I greatly appreciated the view into the lives and contributions of the ordinary women on England during WWII. The overall concept of the WI was fascinating, as well--women working together to improve the lives of women and children (often despite a general lack of interest on the part of the powers that be). Nothing else I have read has talked about the programs to ensure that all produce grown during the war was saved and used, nor how the small communities coped with the influx of refugees (from their own cities and abroad) during the war.
My criticism of the book is two-fold. I will admit that I didn't find the writing style or the organization of the book to be as gripping as the blurb would suggest. It's a difficult subject to make work, in many ways, especially when we are used to a more narrative style even in our histories. That's the readability criticism--I found it slow going, though interesting enough overall to push on.

My second criticism is that I found it generally too positive. There was little said of the problems and resentments that I know ran strong among those being asked to billet children from the city, and absolutely nothing about the abuses that I have read of elsewhere. Similarly, no one seems to have admitted to feeling like the women were being asked to do far too much, with far too little--that they were, in fact, being taken for granted. I know that during the war people were generally determined to "do their bit," but find it hard to believe that there was so little resentment, even when reflected on years later. A few nods at the frustration of being asked to preserve fruits but denied extra sugar, etc., tell me that there is a more nuanced story that could be told. I wish Ms. Summers had told it.

My Recommendation:
For those interested in WWII, this is definitely worth looking at--as it is for anyone who is interested in womens' history. It's not a perfect book, but it does offer an insight I've not seen elsewhere.

FTC Disclosure: I checked Home Fires out of my library, and received nothing from the writer or publisher for my honest review.  The opinions expressed are my own and those of no one else.  I am disclosing this in accordance with the Federal Trade Commission's 16 CFR, Part 255: "Guides Concerning the Use of Endorsements and Testimonials in Advertising."
non-fiction review women women's history WWII