- December 08, 2017
Decided to have some fun as we run up to the holidays (and yes, I will unashamedly say "holidays," because there are a bunch of them and I like to celebrate any that come my way, and encourage others to celebrate any they like). So I dropped in to see how the Pismwallops PTA handles the event. With a fund-raiser bazaar, of course! But nothing ever goes quite according to plan when JJ MacGregor is involved. It's looking like a 2-part story.

“JJ, we need another table for the baked goods!”

I tuned out the last voice. Arne Hancock always had a crisis for me to fix. I dispatched two kids to get the table Patty Reilly needed for the brownies, and went to help Kitty Padgett with the lights that didn’t light. Kitty’s the PTA president, so she was getting her own share of people demanding instant fixes.

Kitty gave that the eye-roll it deserved, so I added, “In an outlet that actually works?” The Pismawallops High gym needed some upgrades, no question.

“I tried three outlets,” Kitty said. “It’s got to be a burned out bulb.”

I eyed the antique string of lights on our decidedly fake tree. There was no good way to find the defective bulb, unless the principal had someone in detention he really wanted to punish. Each bulb would have to be replaced, one at a time, and the string tested after each one. I made the sort of executive decision expected of a VP, even of a small-town PTA.

“Toss ’em. Buy a new set at McMullens when we get done here, and we can string them in the morning.”

Kitty nodded agreement and we moved on to the next set of crises. Arne was at my shoulder, so this time I had to pay attention.

“Someone has been playing with the hot pads and scrubbers. I left them perfectly arranged, and now look at them!”

I could see his point. The colorful clothes and crocheted plastic pot scrubbers were jumbled in disarray on the table. I thought it looked fine—a cheerful chaos—but Arne liked order.

“I suppose someone must have bumped the table or something,” I said. “It won’t take long to fix it. Get some of the kids to help.”

He pursed his lips and regarded the teens who swarmed over the gym, hanging decorations and creating a joyful chaos. At length he selected Kat and Brian—Kitty’s daughter and my son—and set them to work lining up the handicrafts.

By bedtime, the gym looked pretty good. Swags of greenery covered at least some of the cinder-block walls, and the tables lining those walls were heaped with seasonal goods. Our Holiday Bazaar was as ready as it would ever be, aside from the lights. Arne’s table was a perfect rainbow again, and Patty had the food tables organized with pricing signs to show were everything would go when the goodies rolled in in the morning. A fair number of sealed containers were already in place.

I checked to make sure none of the containers could be opened or nibbled through. We’d been known to have a pest or two in the school. Convinced everything was tight, I doused the lights, the last one out, and locked up.

I was the first one back at the gym Saturday morning, with Kitty right behind me hauling new strings of colorful lights. It was two hours until the holiday bazaar opened its doors, and we had some work to do.

I hit the lights, and scanned the room. Everything looked like we’d left it…until my eye reached the hot pads. Arne’s fastidious rainbow had been scrambled into a chaotic swirl once again.

Kitty, coming up behind me, said, “What?”

“But how could it have happened?” I wanted to know. “I was the last one out. It was fine then, and I locked the door. No one’s been here.” Except someone obviously had been there.

Carlos, the custodian and our PTA secretary, had keys, but he swore he hadn’t been near the place, and I believed him. That left burglars, who I assumed would at least have stolen some brownies, not just messed up one table; students, who would have no way to get in; or ghosts.

“Poltergeist. That has to be it,” I told Kitty.

“The Ghost of Christmas Presents?” she suggested.

“Let’s get these lights strung, then we can do something about the table.”

I checked the other tables, but as far as I could see, no one had touched anything else. I did eye one well-sealed pan of brownies, which seemed to have some scratches on the cover, but nothing had gotten in. We shared a brownie before we started, just to be sure they were okay.

We strung the tree in record time. Expecting volunteers and food donations to begin arriving at any moment, I crossed the room to turn on the music, though I’d been enjoying the silence. Kitty headed for the hot pads.

I was about to flip the switch when Kitty gasped.

“What?” I turned around, not sure what to expect. That talk of ghosts had been a joke, but maybe we were a little jumpy, or just punchy.

Kitty was crouching by the table, hand extended. She made a little kissing noise and said, “Kitty!”

“Why are you calling yourself?” Now I wondered if there’d been something odd in those brownies we’d tested.

“Kat? What’s she doing under there?” And Kat couldn’t hide in that heap of hot pads.

I still wasn’t getting it, and became convinced the brownies had been laced with something. That would be a fiasco, we’d have to…

“C-A-T. There’s a cat in here!” Kitty was laughing, at the same time as she tried to keep still and not scare the animal.

A little, scared, scrawny kitten crawled out from under the hot pads, where it had obviously made a warm nest for the night. Kitty scooped it up, cuddling it. “Here’s our Christmas ghost!”

“A Christmas present for Arne, for sure,” I laughed. “But how on earth did it get in here?”

“Her,” Kitty corrected, having taken a look. “She’s for Arne, of course.”

“You don’t think he’s going to adopt a cat, do you?” I looked at the ruin of his perfect rainbow. “Fussy, tidy people do not like kittens.” 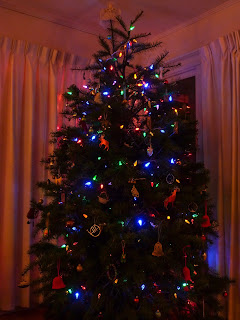