YA Audio: The Children of Willesden Lane 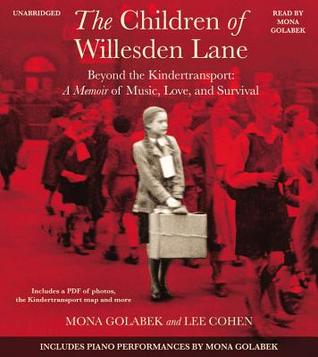 Publisher's Summary:
With the raw emotion of The Diary of Anne Frank, Mona Golabek's powerful memoir is a poignant story of tragedy and triumph in a time of war. Famed concert pianist Mona Golabek shares the inspirational true story of her mother's escape from pre-World War II Vienna to an orphanage in London--243 Willesden Lane. 'The music will give you strength....it will be your best friend in life.' With these words--the last she would ever hear from her mother--ringing in her ears, young piano prodigy Lisa Jura boarded the Kindertransport and headed for safety. Amidst the dozens of Jewish refugees trying to make their way in war-torn London, Lisa forms indelible friendships, finds romance, and, against all odds, wins a scholarship to study piano at the Royal Academy of London. This is a stunning testament to the power of music to lift the human spirit and to grant the soul endurance, patience, and peace.

My Review:
The Children of Willsden Lane is what I might call a novelized biography of the author's mother. That is, it doesn't stick exactly to what is known, but instead provides us with both imagined dialogue and Lisa's thoughts as she faces difficult circumstances. It's hard to know exactly how much Lisa would have remembered and told her daughter later, but I'm pretty sure not the amount of detail the book contains. The result works, however. Mona Golabek has created a book that is incredibly moving, as well as revealing a great deal about the lives of the children who were sent to England on the Kindertransport.

The youngest children were, of course, fostered to people who no doubt treated them in a variety of ways from the wonderful to the awful. But for those, like 14-year-old Lisa, who were old enough to work, work was required (to my 21st-Century mind, the idea that you'd require 14-year-old refugees to get a job is a bit mind-boggling, but it wasn't so unusual then).

Lisa's first post, as a servant in a country house, wasn't terrible. The people were kind, and the work not overly hard. But it was excruciatingly lonely, because no one seemed to recognize that a child of 14 might like to have some people around her who shared her religion, if nothing else. She was horribly homesick and isolated.

That s what made 243 Willesden Lane a home for Lisa and the other "kinder" who lived there all through the war: they were together, all refugees who had lost everything they knew. She still had to work hard, didn't always get enough to eat, and came very near to being killed by a German bomb during the Blitz. But she had her music, and she had her friends, and that was enough to keep her soul alive.

Because this is not exactly a novel, not everything works out as neatly as we might like. But one thing does, almost unbelievably: Lisa gets that scholarship, and is able to continue to study music (even as she has to continue working to earn a living, too).

My review of the audio aspect of the book is mixed. Lee Cohen reads well, and does a good job with the different characters. However--and this bothered me quite a bit--her English accents are hopeless. They end up sounding almost as German as the characters with German accents. And in the end, that didn't matter to me at all, because the audio book has something that makes it a must-listen: the use of the author's own piano music to enhance the story. Because the piano is so important to Lisa and to the story, having the music there as the narration describes Lisa's playing is amazing.


My Recommendation:
This is a must-read, and because of the use of the piano music, the audio book is a clear winner. It isn't a book for young children, and I'm not really sure if it was even meant for YA (as opposed to adults), but my feeling is that young adult readers might relate, and any child over about 13 or 14 should be able to cope with the story; there is no sex and the violence is what we read of in our history books, only made more personal because we care about Lisa.

FTC Disclosure: I checked The Children of Willesden Lane out of my library, and received nothing from the writer or publisher for my honest review.  The opinions expressed are my own and those of no one else.  I am disclosing this in accordance with the Federal Trade Commission's 16 CFR, Part 255: "Guides Concerning the Use of Endorsements and Testimonials in Advertising."
audio books Kindertransport music WWII YA book review