Audio-book review: The Last of the Doughboys 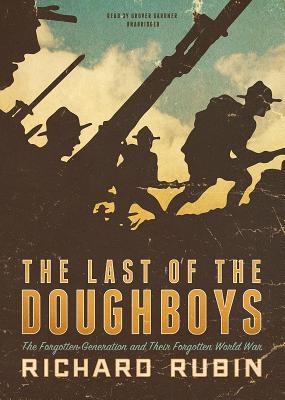 Publisher's Summary:
In 2003, 85 years after the armistice, it took Richard Rubin months to find just one living American veteran of World War I. But then, he found another. And another. Eventually he managed to find dozens, aged 101 to 113, and interview them. All are gone now.
A decade-long odyssey to recover the story of a forgotten generation and their Great War led Rubin across the United States and France, through archives, private collections, and battlefields, literature, propaganda, and even music. But at the center of it all were the last of the last, the men and women he met: a new immigrant, drafted and sent to France, whose life was saved by a horse; a Connecticut Yankee who volunteered and fought in every major American battle; a Cajun artilleryman nearly killed by a German aeroplane; an 18-year-old Bronx girl “drafted” to work for the War Department; a machine-gunner from Montana; a Marine wounded at Belleau Wood; the 16-year-old who became America’s last WWI veteran; and many, many more.

They were the final survivors of the millions who made up the American Expeditionary Forces, nineteenth-century men and women living in the twenty-first century. Self-reliant, humble, and stoic, they kept their stories to themselves for a lifetime, then shared them at the last possible moment, so that they, and the World War they won – the trauma that created our modern world – might at last be remembered. You will never forget them.

My Review:
I have read and listened to a lot of books about WWI, or fiction set during that war. This is arguably the best. The publisher's blurb gives some idea of why. I will go further to say that Rubin skillfully interweaves the historical events before, during, and after the war into the accounts of the 30+ veterans he interviewed. The result is a book that not only gives a deep personal insight into what it was to be there (though most of the men Rubin interviewed downplayed the death and danger), but also helps clarify what the US did in the war--and why. For me, there was another side-effect: since much of my knowledge of the war comes from fiction written in Canada or the UK, I had a different set of battles in mind as the important ones. The book gave me a new set of names to remember. (By the way, I would dearly love to read any similar book in which someone interviewed British or Canadian veterans of that war).
The book is not a comprehensive history of the war, for all that. It does not try to understand the political mess that dragged the world into the war, nor even to lay out all the battles in an orderly fashion. What it does, and I would say does well, is personalize the war. And the fact that Rubin could find veterans of that war in 2003 helped to bring back to me that this was my grandparents' war. Both of my grandfathers were involved in the war; I have to regret that I lost them before I was old enough to know how much I wanted to ask them about it. Listening to the accounts of the men (and woman) Rubin interviewed helps bring their lives into focus for me.

My only regret with this book is that it needs visuals--maps and photos. It occurs to me that the print edition very likely has these things, and that this is a drawback of listening to history rather than reading it. I may pick up a print copy, in part also because there were things I learned that I'm already having trouble remembering.


My Recommendation:
A must-read for anyone interested in WWI, or anyone who hardly knows we fought in the First World War. I'll go out on a limb and recommend the print edition, unless it turns out not to have any images, in which case, Grover Gardner does an impressive job of reading, especially voicing the men Rubin interviewed.

FTC Disclosure: I checked The Last of the Doughboys out of my library, and received nothing from the writer or publisher for my honest review.  The opinions expressed are my own and those of no one else.  I am disclosing this in accordance with the Federal Trade Commission's 16 CFR, Part 255: "Guides Concerning the Use of Endorsements and Testimonials in Advertising."
audio books book review history oral history WWI