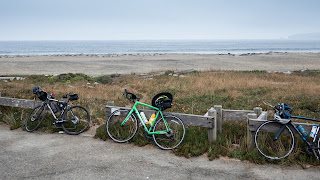 A few weeks ago I joined a couple of backpacking friends (Zeke and Walt) for a bike trip up the Marin and Sonoma coastline in California (yeah, a bunch of backpackers on bikes. It happens). The weather cooperated, mostly, and we had a great time. Not an epic ride in terms of miles covered, but enough to see some country and plenty of hills for my flat-lander companions!

Here are a few photos to share the fun.

One of the fun things was that we got to start riding right from my house (this did mean that most of the trip was routes I'd ridden before, but they are worth repeating). The first day's highlight was crossing the Golden Gate Bridge.

Moving on into Marin, we had to climb a long way up to our campsite at Pantoll on Mt. Tamalpais. A little humor helped to keep us going. Temperatures that day were warm, and a bit humid (most of CA was absolutely baking, so we were actually in a good place), which made the climb harder than it needed to be.
Sometimes there are a lot of turkeys hanging out and making noise in campgrounds. We did consider supplementing our protein, but Zeke, in charge of food, had brought plenty, so we let these guys go on gobbling. 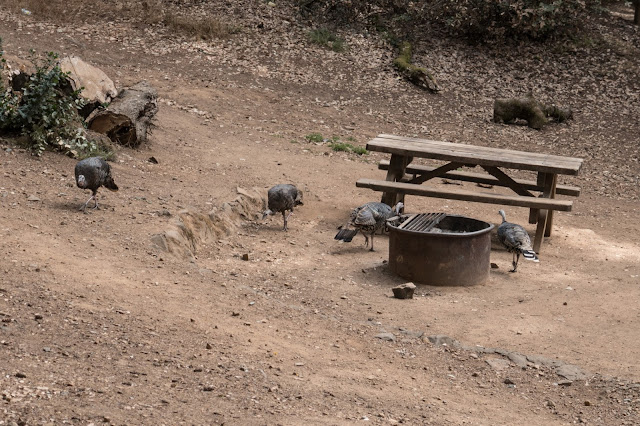 That night we walked out the Coastal Trail on the shoulder of Mt. Tam to enjoy views of Stinson Beach and Bolinas Lagoon at sunset. The full moon was rising behind us as we enjoyed the evening show. 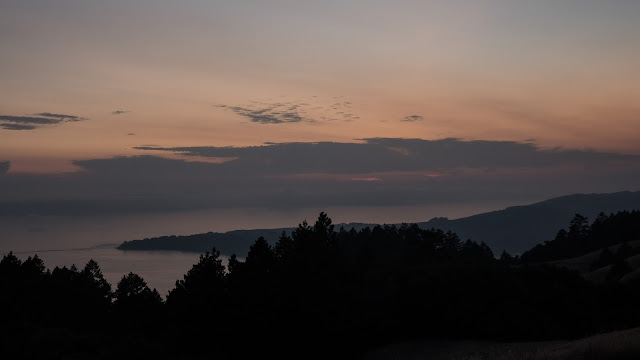 I was glad we'd enjoyed the evening view, because next morning the fog moved in. It was beautiful in camp in the morning. 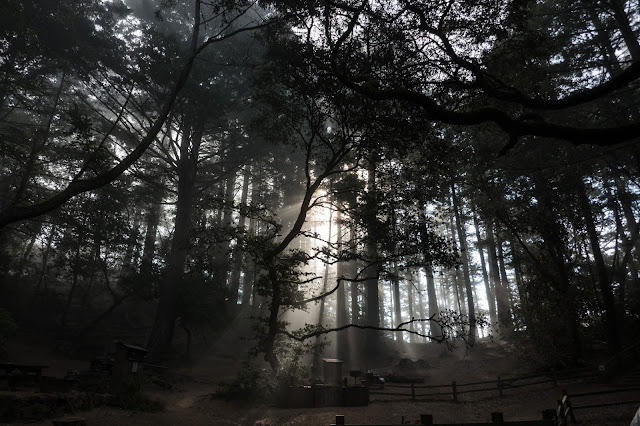 The fog was beautiful in another way as we rode through it, though it was disconcerting as in places visibility was reduced to a few dozen yards. And it was frustrating to know that there were stunning views of the ocean if we could only see them!
We spent the next two nights at Samuel P. Taylor State Park, which gave us access to ride out Pt. Reyes. Since the lighthouse was closed to tours on the day we were there (research fail!), we chose to visit Drake's Beach and enjoy a picnic on the edge of the fog. It's a marvelous ride either way.
Drakes Beach clearly gets a lot of use on sunny weekends, but on a foggy Thursday, it was all ours. The receding tide left kelp lying about in interesting patterns on the sand. 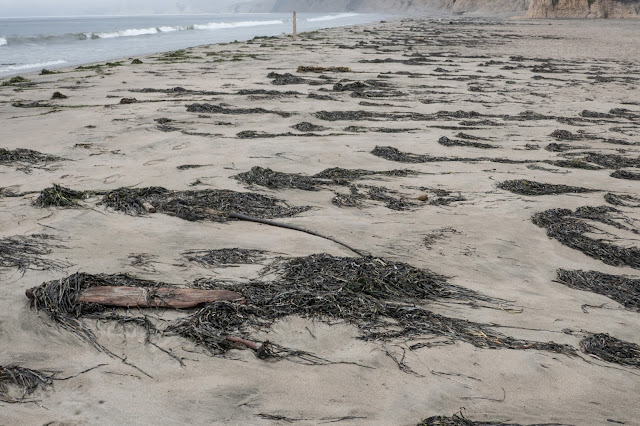 In a theme some of my readers may remember, I had to photograph, mourn, and pack out the inevitable balloon. I've said it before, and I'll say it again: DO NOT release balloons! Of course, this was probably an unintentional release, but still. Maybe think twice about helium balloons at all. 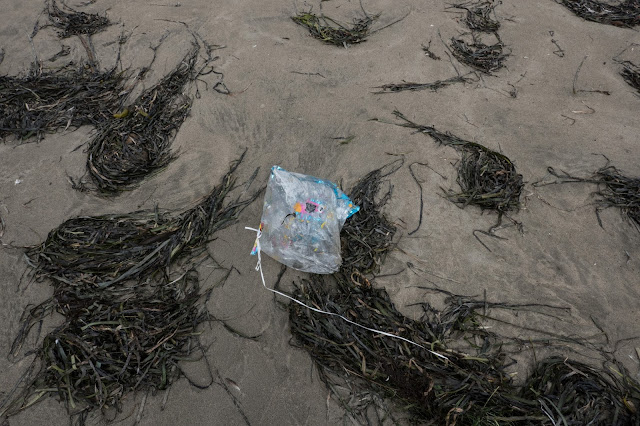 The next day the sun came back out for real, and we enjoyed a beautiful ride up Tomales Bay and through rural Sonoma County to Bodega Bay. There are lots of seafood restaurants along Tomales Bay.
In case you don't want seafood, this shed lets you know that there's something else cooking inside. 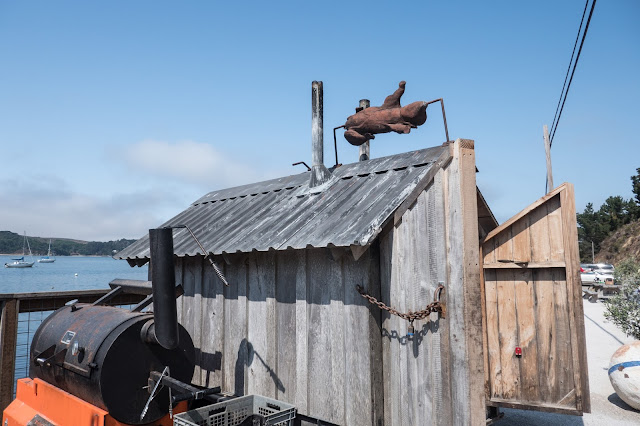 In the calm near the mouth, we could see that there was still fog right on the coast. 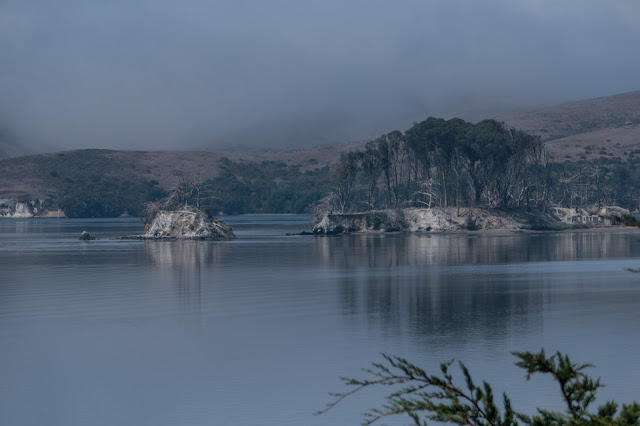 Climbing away from Tomales Bay, we hit the town of Tomales just in time for lunch. The bakery was a nice discovery. What's the good of biking all day if you can't enjoy a nice brownie for lunch?
We hit the fog just as we pulled into Bodega Bay at the end of the longest day. Camp felt cold and windy and uninviting right on the shore, so we went into town to eat. But just before bed, the fog lifted a little.
Our final day served up a mix of sun and fog--typical coastal weather--as we headed north through Jenner and on to Stillwater Cove County Park.

Sometimes it doesn't feel safe to stop and wait. This guy watched a long time to see if I was dead. 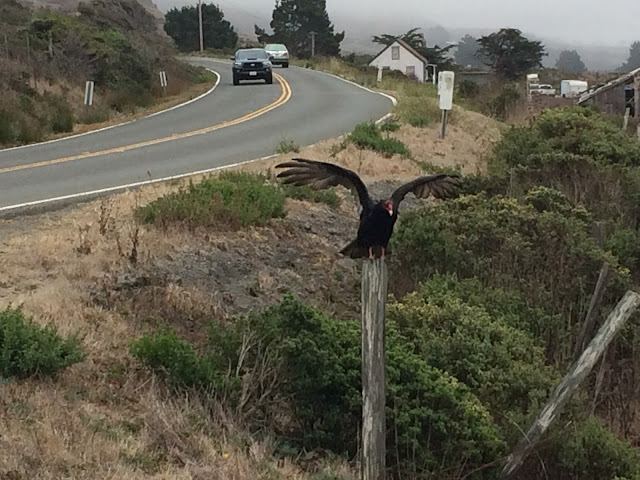 Jenner, at the mouth of the Russian River, is a favorite snack stop, though this time it was too early for lunch and we merely enjoyed the views for a few minutes.
We made it to camp in the end, and watched a beautiful sunset from the cove. 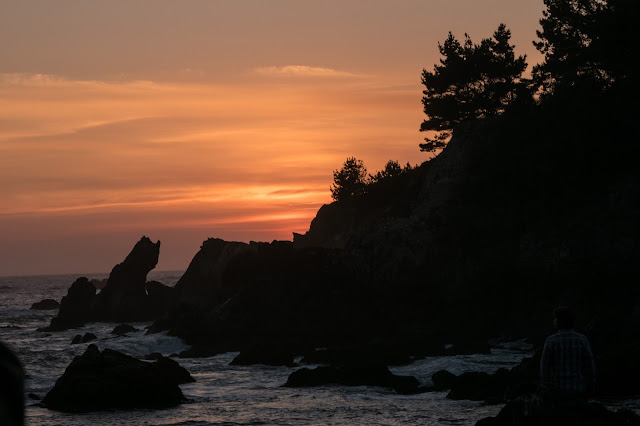 Stillwater Cove marked the official end of the ride, though my husband (who joined us in Bodega Bay) and I did a short ride the next morning. We piled into a couple of cars (we had one along the whole way, Zeke's wife driving our gear from camp to camp, and my husband brought one up) to head back home. On the way, we stopped at Ft. Ross State Park, to check out the reconstruction of the southernmost Russian settlement in what is now the US.
About 80% of the people checking out the chapel had to tap the bell, which could be heard all over, even if you just used your knuckles.
The place was meant mainly to grow food for the Alaskan outposts (it didn't really succeed), but there are reminders it was also a fort, and they were prepared to defend themselves against the Spanish or the English at need. 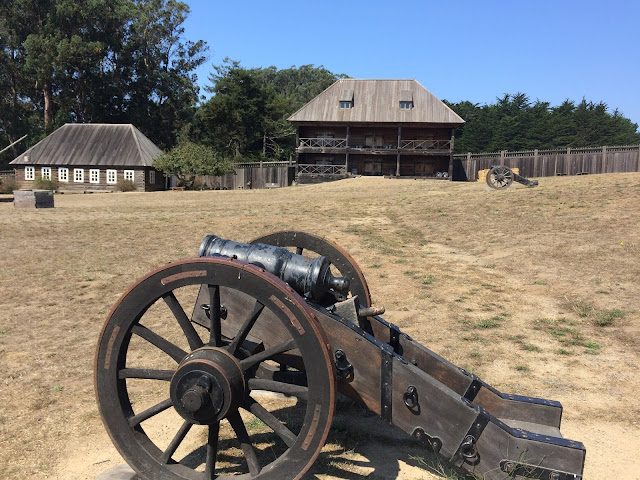 One final spectacular view on our way back home. 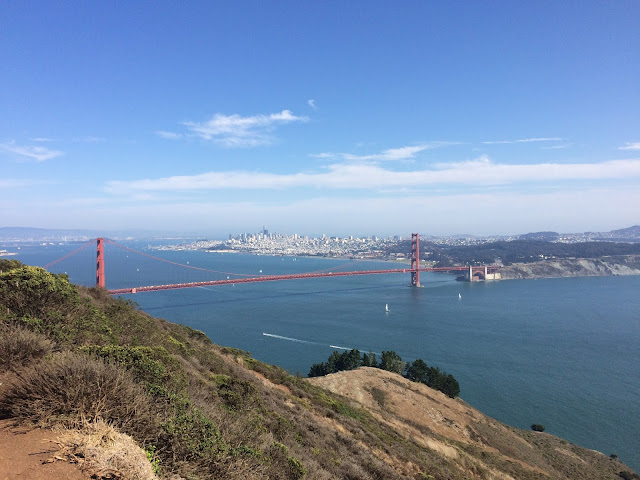