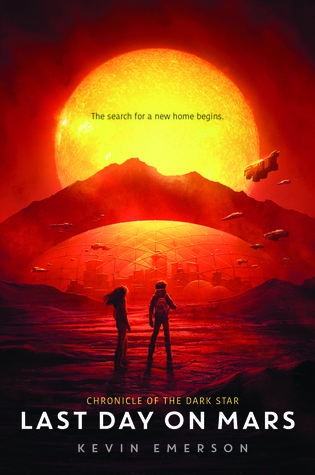 Publisher's Summary:
It is Earth year 2213—but, of course, there is no Earth anymore. Not since it was burned to a cinder by the sun, which has mysteriously begun the process of going supernova. The human race has fled to Mars, but this was only a temporary solution while we prepare for a second trip: a one-hundred-fifty-year journey to a distant star, our best guess at where we might find a new home.

Liam Saunders-Chang is one of the last humans left on Mars. The son of two scientists who have been racing against time to create technology vital to humanity’s survival, Liam, along with his friend Phoebe, will be on the very last starliner to depart before Mars, like Earth before it, is destroyed.

Or so he thinks. Because before this day is over, Liam and Phoebe will make a series of profound discoveries about the nature of time and space, and find out that the human race is just one of many in our universe locked in a desperate struggle for survival.
My Review:
In the beginning, this felt like just another middle-grade story of friends and testing their limits, only with a novel setting. Within three chapters, it was clear that it is a serious work of science fiction, and I was hooked. Liam and Phoebe have their moments of being very 13, and more interesting issues around, oddly, being rooted on Mars in a way that their parents never can be. After all, the kids were born there, and never knew the Earth that all their elders are mourning.
But issues of teen rebellion are soon lost in a high-speed,  high-stakes adventure, complete with some hot driving (Liam is sort of legal to be driving that skimmer drone, but who is left to care?). A couple of the scenes where he handles his drone (not  sure why it's called a drone, since it's manned) were a bit reminiscent of the original Star Wars movies, but not in a bad or particularly derivative way. Just a nod to one of the things we expect to see in a good space adventure.

It is often important in middle grade adventures to somehow get rid of the adults, so the kids can have real autonomy. This is done in Last Day on Mars in a convincing way, though the kids are left one sort-of adult. That helps ameliorate the other problem books with kid heroes doing big things often face: there's stuff that needs doing that they just can't realistically do, like calculate the course out of the solar system. That's taken care of here, and Liam and Phoebe are left to do what they do best, which is to think outside the box.

My Recommendation:
This is a very promising start to a promising SF series, and I recommend it for kids about 11 or 12 and up--there is a fair amount of real peril, and some parts that I think would just go over the heads of many younger kids, though there is no sex or language. My main caveat: while the immediate problems Liam and Phoebe face on Mars are tied up nicely in the end, the story is definitely not over, and I don't know when the next book is coming out (okay. I just check on Goodreads, and it is scheduled for release Feb. 13. That's not bad!). If you read this, you will definitely be waiting eagerly for the sequel.

FTC Disclosure: I checked Last Day on Mars out of my library, and received nothing from the writer or publisher for my honest review.  The opinions expressed are my own and those of no one else.  I am disclosing this in accordance with the Federal Trade Commission's 16 CFR, Part 255: "Guides Concerning the Use of Endorsements and Testimonials in Advertising."
middle grade review science fiction