Non-fiction Review: Year of No Clutter 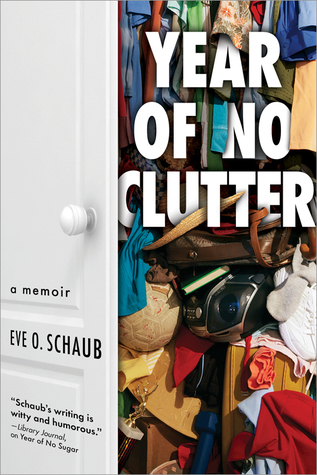 Publisher's Summary:
Eve has a problem with clutter. Too much stuff and too easily acquired, it confronts her in every corner and on every surface in her house. When she pledges to tackle the worst offender, her horror of a "Hell Room," she anticipates finally being able to throw away all of the unnecessary things she can't bring herself to part with: her fifth-grade report card, dried-up art supplies, an old vinyl raincoat.

But what Eve discovers isn't just old CDs and outdated clothing, but a fierce desire within herself to hold on to her identity. Our things represent our memories, our history, a million tiny reference points in our lives. If we throw our stuff in the trash, where does that leave us? And if we don't...how do we know what's really important?

Everyone has their own Hell Room, and Eve's battle with her clutter, along with her eventual self-clarity, encourages everyone to dig into their past to declutter their future. Year of No Clutter is a deeply inspiring--and frequently hilarious -- examination of why we keep stuff in the first place, and how to let it all go.

My Review:
The summary for once hits the nail on the head (in the second paragraph in particular). When I first saw this book I nearly passed without a second look, because I thought it was another in the growing collection of books about how much my life would be improved if I just got rid of all the extra stuff in our house (note: this is probably true. I just don't like self-help books). But a second look showed me that this wasn't self-help advice from some perfect housekeeper. This was the memoir of a woman trying to deal--though humor as well as hard work--with border-line hoarder syndrome, and much of what she had to say resonated.

In particular, Schaub's idea that (for her) things not only represent her memories, but that she has a very real fear that they may actually be the memories. If the stuff is gone, won't the memories be also? That thought, coupled with her ear of making the wrong choice, of throwing something out only to want it immediately after (her second insight into her inability to throw anything away), resonated with me. Those two things are exactly why I hang onto far too much stuff, the worn out (or at least half-used) stuff as well as all that art from the boys' childhood. (Depression-era parents and a childhood on a shoe-string budget contribute to the problem).

Seeing where the inability to get rid of anything led Schaub, and watching her conquer her more pathological version of that inability, isn't just inspiring. She actually offers some concrete help to those of us who share that fear of throwing away the wrong thing, and with no judgement. Maybe I could get that same inspiration from the self-help books. But I somehow doubt it. I think I might respond better to seeing someone worse at this than I am succeed. In any case, how could someone who has never saved anything useless tell me how to convince myself it's okay to get rid of stuff?

My Recommendation:
If you have trouble getting rid of stuff, read this. You don't have to be a hoarder, or have a hell-room like Schaub does. Just a closet or two that you haven't cleaned out in 20 years, or in which all you ever do is rearrange the stuff without reducing it. Or read it for the fun of watching someone overcome a serious handicap and come out on top (of the pile of stuff, of course). You can also read it for the laughs, because I forgot to mention that Schaub is a very funny writer.

FTC Disclosure: I checked Year of No Clutter out of my library, and received nothing from the writer or publisher for my honest review.  The opinions expressed are my own and those of no one else.  I am disclosing this in accordance with the Federal Trade Commission's 16 CFR, Part 255: "Guides Concerning the Use of Endorsements and Testimonials in Advertising."
book review clutter hoarders housekeeping non-fiction