Review: Time to Be in Earnest, by P. D. James 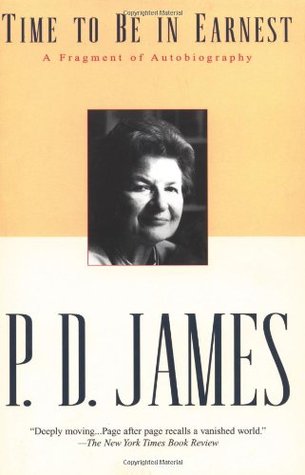 Publisher's Summary:On the day she turned seventy-seven, internationally acclaimed mystery writer P. D. James embarked on an endeavor unlike any other in her distinguished career: she decided to write a personal memoir in the form of a diary. Over the course of a year she set down not only the events and impressions of her extraordinarily active life, but also the memories, joys, discoveries, and crises of a lifetime. This enchantingly original volume is the result.

Time to Be in Earnest offers an intimate portrait of one of most accomplished women of our time. Here are vivid, revealing accounts of her school days in Cambridge in the 1920s and '30s, her happy marriage and the tragedy of her husband's mental illness, and the thrill of publishing her first novel, Cover Her Face, in 1962. As she recounts the decades of her exceptional life, James holds forth with wit and candor on such diverse subjects as the evolution of the detective novel, her deep love of the English countryside, her views of author tours and television adaptations, and her life-long obsession with Jane Austen. Wise and frank, engaging and graceful, this "fragment of autobiography" will delight and surprise P. D. James's admirers the world over.

My Review:
Time to Be in Earnest is an odd sort of hybrid, and does a number of things, none of them perhaps perfectly, but all of them better than might be expected, to make an intriguing whole. The sub-heading is about right: it's a fragmentary autobiography, and the author has made little attempt to be complete or chronological. An attentive reader can fill in most of the blanks, but don't look here for details about all aspects of James' life.

In addition to being an odd form of memoir (I think that might be a more accurate descriptor than "autobiography"), the book is a meditation on all sorts of topics, from politics to literary criticism. It gives the reader a glimpse into the author's political views, which may or may not be a good thing (she's not awful, but I would like to argue with her over some points). It also gives a look into the publishing world, at least as it used to be. Written from August 1997 to August 1998, the book long precedes the changes that have rocked publishing since about 2010.

For me, the most interesting bits are the places where James critiques, or just meditates on, the works of other authors, living and dead. There again, I don't agree with everything--I think she sells Dorothy Sayers short, but I know less of Sayers' personal life and might easily be proved wrong. But her thoughts on detective fiction are food for thought, as she sees it moving very much toward more police procedural, and the necessity of accuracy in all matters of policing. I am thinking that the "cozy mystery" trend hadn't taken hold yet then, since much of what is selling now is far from what she describes, and often plays fast and loose with the realities of police work today.*

Finally, if for nothing else, the book is worth reading for the talk she gave, reprinted as an appendix, analyzing Jane Austen's Emma as a detective story. I could only wish I had read Emma more recently, but the analysis is fascinating, and makes me want to re-read Emma.


*Note: I am a bit guilty of this myself. It's hard to have a good amateur detective and still give due respect to reality.

My Recommendation:
There is something in here for many kinds of readers. Fans of P.D. James' mysteries will want to read it for a closer look at the author. There are also bits of history regarding both WWII and the realities of life in England before the war. Finally, for many as for me, there are the insights into a wide range of books--and also into the selection of the Booker Prize winners. Not a must-read, but worth the time invested. I could wish the paperback had larger print, but that says more about me than anything else.

FTC Disclosure: I bought Time to Be in Earnest second-hand, and received nothing from the writer or publisher for my honest review.  The opinions expressed are my own and those of no one else.  I am disclosing this in accordance with the Federal Trade Commission's 16 CFR, Part 255: "Guides Concerning the Use of Endorsements and Testimonials in Advertising."
book review literary criticism memoir P.D. James