- August 18, 2017
A couple of weeks ago, I did a 6-day backpack trip with my husband and eldest son (ES) on the east side of Glacier Peak (in Washington State; not to be confused with Glacier National Park). After a good snow year, there was lots of water, a fair collection of mosquitoes, and an overwhelming abundance of wildflowers. Here's a quick trip report with a lot of pretty pictures.

For those who like more detail on routes: We hiked the Phelps Creek Trail to Spider Meadows, climbed the Spider Glacier through Spider Gap and down to Lyman Lake. Crossed Cloudy and Suiattle Passes to pick up the PCT for a few miles, then the trail through Buck Creek Pass and back down to the Chiwawa River to complete the near-loop.

Day One:
We arrived at the trailhead, after a long and slow dirt road (the last 2.5 miles were not at all appropriate for a small sedan, but we did it anyway), in time for lunch. There were a startling number of cars in the parking area, but it was Sunday and we had faith, well-placed as it turned out, that most would be leaving that day.
There were great views at the trailhead (the photo above just hints at it), but the trail dove right away into thick forest, where we began almost at once to see the wildflowers that were to be such a marker of this trip.
After a couple of hours (maybe 5 1/2 miles), we began to glimpse what we had come for. It wasn't a long hike, but we were happy to know that camp would be near.
The campsite we claimed was about perfect: right on the edge of the meadow with a view up at the larger peaks and the next day's route.
Day Two
We woke to frost on the flowers, but the sun eventually hit the bottom of the valley, and we moved off through the garden.
The trail first led us through the meadow, at a very easy grade, before we crossed Phelps Creek (not scary, but ES and I both got our feet wet). Then it began to climb with a disconcerting directness!
We eventually ran out of trail, and continued straight up the glacier. It's little, without crevasses or other challenges. It may in fact be a permanent snowfield, but the map claims glacier.
We hit the saddle in time for an early lunch. Given the view, I wouldn't have lunched anywhere else. If you look very, very closely, you can see the summit of Mt. Baker in the low spot to the left of the double peak in the center of the skyline. Below us the Upper Lyman Lakes showed themselves to be the stark pools left behind the retreat of a glacier. We have a long way to go down, but the snowfields prove our salvation--we can slide most of the way, thus sparing our knees, though at some cost of frozen backsides.
Lower Lyman is also a settling-pond for glacial silt! Not only does the color give it away, but we could see the silt in the shallows, and the path the inlet has carved through it. 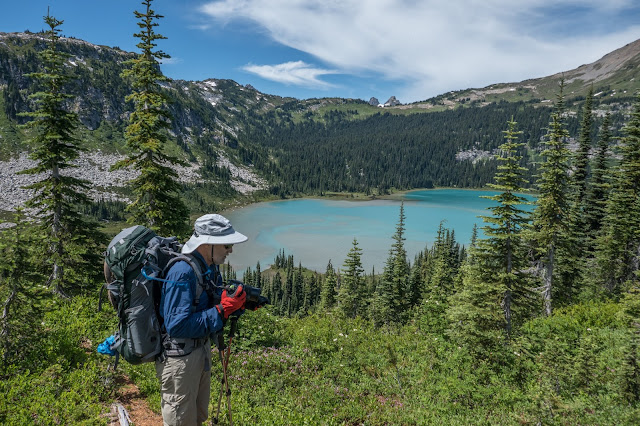 Day Three
We found a camp on the far shore of Lyman Lake, only later discovering that there were much nicer camps elsewhere. I advocated a move, but the guys were too settled. In the morning, after exploring along the west side of the lake up to the inlet--an impressive cascade tumbling from the lakes above--we headed up toward Cloudy Pass.
From the pass, we had a phenomenal view back to where we had been (Lyman Lake is visible at the bottom, and Spider Gap is the low spot on the ridge above the lake).
There were also tantalizing hints of the big show, what we had really come for.
We made this a very short day, stopping just below Suiattle Pass at a campsite with a fantastic view. We spent the afternoon vacationing--naps, reading in the tent, and just poking around a little until dinnertime.
Day Four
Began this day very early, in order to catch sunrise on the mountain. Since it was late July, and we were very far north, that meant a 5 a.m. rising time. In most of our camps, we didn't get direct sun until much later, but it was light until 10 p.m., and light again shortly after 5, so we didn't make much use of our headlamps.
This day was our longest hiking day, with a lot of ups and downs as we had to cross a couple of drainages and climb to Buck Creek Pass. Along the way, we topped out on the imaginatively named Middle Ridge, and followed a use trail up the ridge in search of views. We found a sea of lupine.
Just before dropping to our camp (which had no views, alas, but was a short walk from this spot), we crossed a steep meadow white with Pasque flowers, bistort, and valerian, with a few asters and an occasional red paintbrush. And a volcano.
Day Five
We planned a short backpacking day on this one, so that we could do some dayhiking to explore the high ridges. We left camp early to follow a trail along the ridge toward High Pass, a route we'd heard of from other hikers on this trip. It proved to be yet another scenic highlight.
Steep slopes and waist-high flowers.
Continuing to skirt the top of the ridge. We started running into snowfields along in here. 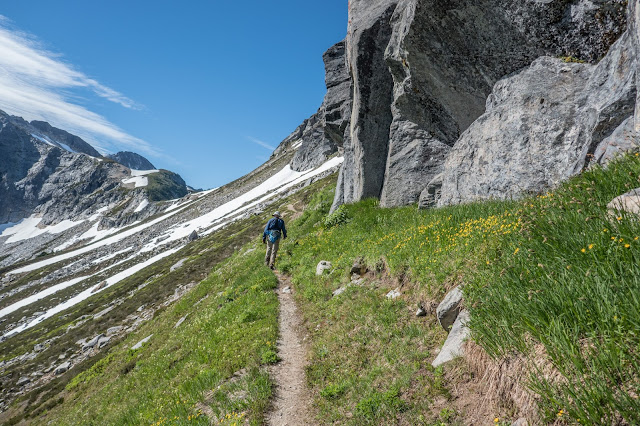 We could have gone a little farther, but the route to High Pass traverses high, steep snowfields above a drop-off (on the left in the photo below). That's not something to do without an ice axe. So instead, we climbed a knob above the trail, where we had 360-degree views.
And, of course, the knob was covered with flowers. 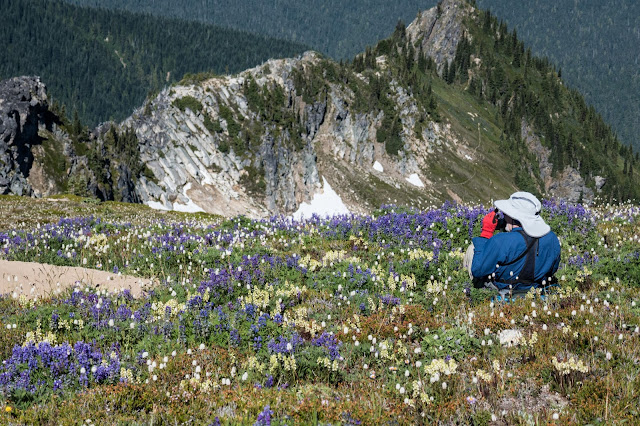 We returned to camp in time for a late lunch. After a nap, we moved our camp a few miles closer to the trailhead, to make the next (final) day's hike easier. That last camp had the advantage of being the only one that was essentially mosquito-free, being well below the snow line and much drier.

Day Six
Final day. We had seen signs warning us that the section of trail we would be hiking this final day had been burned over the previous fall, and might be hard to follow. There were also warnings that the bridge over the Chiwawa River was out, and we worried about that off and on the whole way, knowing that it wouldn't be an option to turn around and go back. In the event, the trail had been cleared of deadfall before we reached it, and we were able to be intrigued by the burn area, rather than stymied by it.
As always after a fire, it takes very little time for green things to start poking through the ash. 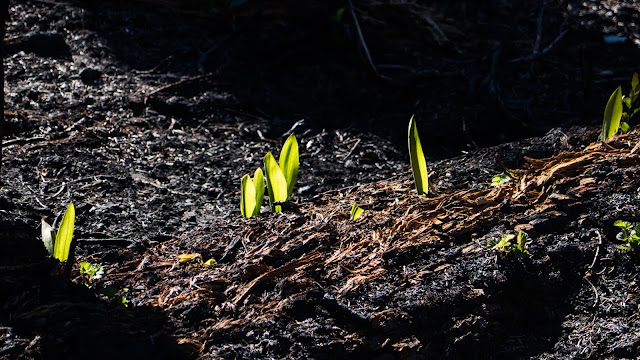 The "destroyed" bridge proved, like the burn area, to be no obstacle at all. I wouldn't want to have to ford the river there, but in fact the bridge was collapsed, but solid, and provided a safe and easy crossing.

In the last mile, the trail gave us one last gift, in the form of a patch of huckleberries. Thus fortified, we were able to make it to the car, and on out to the nearest burger and shake. 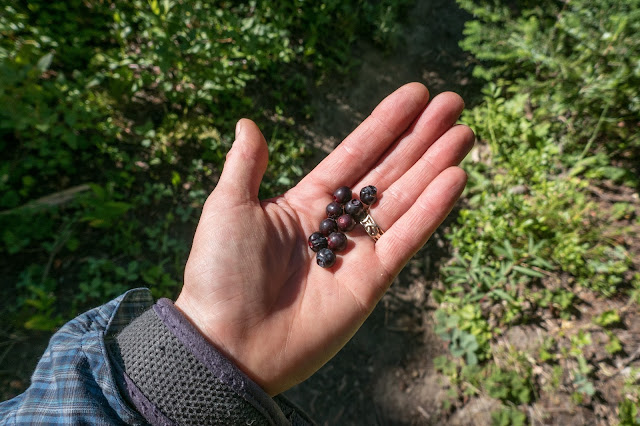