Non-fiction review: Trials of the Earth 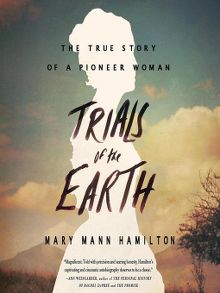 Publisher's Summary:
This wrenching memoir of love, courage, and survival was waiting to he told. Withheld for almost a lifetime, it is a tragic story of a woman's trial of surviving against brutal odds. Near the end of her life Mary Hamilton (1866-c.1936) was urged to record this astonishing narrative. It is the only known first-hand account by an ordinary woman depicting the extraordinary routines demanded in this time and this place. She reveals the unbelievably arduous role a woman played in the taming of the Delta wilderness, a position marked by unspeakably harsh, bone-breaking toil.

On a raw November day in 1932 Helen Dick Davis entered a backwoods cabin in the Delta and encountered Mary Hamilton, a tiny, hunchbacked old woman sitting by the fire and patching a pair of hunting trousers. They became friends. "She began to talk to me of her life nearly half a century ago in this same Mississippi Delta," Davis says, "which then was a wilderness of untouched timber, canebrakes, a jungle of briars and vines and undergrowth." Spellbound during her visits to the cabin, Davis would listen for hours.

At her request, Mary Hamilton began to record memories on scraps of paper. By the spring of 1933 she had given Davis a manuscript of 150,000 words, "the true happenings of my life." Married to a mysterious Englishman, she lived in crude shacks and tents in lumber camps and cooked for crews clearing the primeval Delta forests. While nursing the sick, burying the dead, and making failing attempts to provide a home for her children, she retained a gentle strength that expressed itself in a lyrical vision of nature and in mystical dreams. When Helen Dick Davis appeared to Mary Hamilton in her old age, this long-delayed memoir of pain and grace erupted in a narrative of beauty and compassion and preserved a time and a place never before recorded from such a view. Mary Hamilton's autobiography is published at long last after coming to light from Helen Dick Davis's trunk of mementos.

My Review:
I'm not sure I can add much to the lengthy blurb above! I do want to say that the audio book is very well done, and Barbara Benjamin Creel voices Mary Hamilton in a wholly believable way, while also clearly depicting the voices of the other people who appear in the book.

And what of the story itself? At times, I found myself thinking of it as fiction, and criticizing the author for piling up the tragedy so much. Then I'd remember the books is an autobiography, and this woman really did live through all that sorrow and loss. She manages, however, to both make the reader feel that load of sorrow and to know how she managed to continue on under it (as many another pioneer woman had to do).

Yet despite the extensive losses (if I didn't lose count, the Hamiltons' first 4 children died, either in infancy or in childhood), there is a joy in life that shines through the book, and Mary Hamilton never hates the wilderness that makes her life so hard, but rather loves the beauty of it (when it's not actively trying to kill her or her children). Nor does she lose her religious faith, though the family never attends church, there being none to attend.

The Mississippi Delta isn't a part of the country that I've paid a lot of attention to. Most of my reading about the settlement of the west has been set farther west. It is interesting to note that this area was in many ways even slower to be settled than much of the west--even after 1900 they were clearing and settling new land, and living more than a day's travel (by horse or mule, as the region seems to have been impassible to wheeled vehicles, and from the editor's preface, still was nearly so in 1932).

The editor (Helen Davis) is clear in her preface that she did not alter the story. I suspect, however, given what Mary Hamilton says about her own level of education, that she did edit extensively, and it is hard to know which of them captured so well the feel of Hamilton's life. Whatever the balance, the collaboration worked.

My Recommendation:
I found it a fascinating story, and anyone who shares my interest in understanding the lives of the women who preceded us should be equally enthralled.

FTC Disclosure: I checked Trials of the Earth out of my library, and received nothing from the writer or publisher for my honest review.  The opinions expressed are my own and those of no one else.  I am disclosing this in accordance with the Federal Trade Commission's 16 CFR, Part 255: "Guides Concerning the Use of Endorsements and Testimonials in Advertising."
memoir Mississippi pioneer women pioneers