- August 25, 2017
First the eclipse. As regular readers of this blog will recall, I drove to Oregon last weekend with my oldest son in order to witness the total solar eclipse. I have to say that it was a fantastic experience, and worth the cost of a rental car (because ours chose just that moment to develop a perplexing electrical problem) and 3 days of driving. At least we avoided the massive traffic jams that made some people's trips home 2 or 3 times longer than they should have been.

We targeted the National Forest lands east of John Day, Oregon, in hopes of avoiding the worst crowds. Our plan worked pretty well. That is to say, the small towns along the path of totality were absolute zoos, but we needed nothing there--we'd filled the gas tank farther out, and had all our own food and water with us. The National Forest was also pretty well populated with people camping as we were (unofficially, in what is known as "dispersed camping" and is perfectly legal on most Forest Service and BLM lands).
We found a campsite, set up camp, and located the perfect viewing point: a pile of columnar basalt, tipped sideways in some long-ago upheaval of the earth.

Waiting for Totality.
Someone brought "eclipse cookies" and shared.
When the light started to change, it happened fast.
The main event, as captured by my little Panasonic Lumix DMC-ZS100 (for those who want to know). 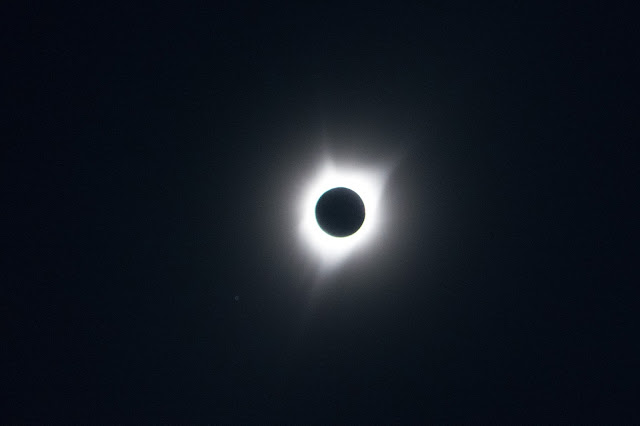 It took some looking to find a story to match the eclipse. But I found this 2012 homage to Douglas Adams, and it felt about right. So, with apologies to the master, here in 855 words, is...

Sunrise on Planet X-4732B was one of the most stunning and beautiful events in the Universe. This is a well-established fact, determined by a complex algorithm developed by the Ultra-Computer housed on the 4th Moon of Planet G-7512, known to locals as Home. The lunar location was originally meant to isolate it and prevent the most powerful computer in the universe from running amok.

Naturally, by the time the Ultra-Computer was completed, there were six more computers being built on six asteroids, each one an order of magnitude more powerful than the Ultra. That is not germane to the issue, but does explain why the Ultra was free to spend its time determining the nature and location of the most stunningly beautiful sights in the universe.

So the morning of the last day of the world began with the last most beautiful sunrise. If anything, the approach of the disaster gave the sunrise a more vivid coloration. It was not, however, beautiful in the eyes of the beholder. There were no beholders, for the same reason that X-4732B has no local name: there are no higher order inhabitants on X-4732B. Lower-order organisms abound, or did before the world ended, but they had failed to evolve to create pollution, disrupt the perfect order of the landscape, or anticipate the apocalypse.

The absence of human or human-like observers was, of course, central to the elegance of the X-4732B apocalypse (for every apocalypse is local, until the final event, the end of the universe so eloquently documented by Douglas Adams). Besides a failure to muck up the view, lower-order organisms tend to lack the necessary glands to panic. Had the planet evolved so much as a muskrat, the day would have taken a different turn, and the Ultra Computer would have had to recalculate the event’s standing in its ranking of events approaching perfection.

Naturally, just when it seemed safe to assume that the apocalypse would proceed with dignity and quiet splendor, everything changed. A lone, tiny, and definitely lost space capsule spiraled down through the oddly Earth-like atmosphere.

In the best of all possible worlds, the man who emerged, dazed, from the erring and now disabled spacecraft would have been Arthur Dent.

His name was Johnson Bob, and he’d been in transit between two planets far from X-4732B when his flight path took him a hair too close to a concert by the intergalactic band Disaster Area. The cosmic disruption of the loudest band in the universe had put an end to his tedious business trip and landed Johnson on X-4732B in time to witness the end of that world, and potentially to disrupt its tranquil order.

The event was saved from the contamination of panic, despite the intrusion of a more-or-less higher life form, by the simple fact that Johnson never left the ship.  He was sleeping off the disconcerting effects of the Pan Galactic Gargle Blaster he’d had in the space port bar before leaving, a task that requires the full concentration of all bodily forces for a full day.

Johnson Bob therefore slept through the end of the world.  He failed to observe as the sky turned from its usual chartreuse to an odd shade of puce and finally a perfect shade of red-orange.  Nor was he aware when the atmosphere boiled away, as his ship maintained the ideal balance of gasses for the continuation of human life.

Johnson Bob likewise missed the exquisite moment when all factors coalesced into the perfect, nearly silent yet symphonic finality.  It was this perfect coordination of elements that led the Ultra Computer to designate the X-4732B Apocalypse as the most elegant apocalypse of all time. Millennia of constipated volcanism beneath the immense chain of volcanoes that ringed the planet burst through the plug in every peak simultaneously, exactly at the instant the asteroid that had boiled away the atmosphere struck precisely at the southern pole, and the sun went nova.

Johnson Bob should have been boiled away with the atmosphere, of course, but the Ultra Computer considered the final touch that perfected the X-4732B Apocalypse to be the manner in which the volcanic cataclysm ejected the one bit of alien matter from the planet in time to make it a purely local event. When Johnson Bob eventually awoke, he had a nasty hangover but no awareness of where he’d been or what he’d done. The blast had flung him back onto his orignal trajectory, and he landed without incident and went to the nearest bar for another Gargle-Blaster, in hopes of clearing his head.
To a human observer, the tiny space capsule as it exited would have looked like a watermelon pip spat contemptuously at the remainder of the universe as the planet exploded into a nearly infinite number of identical fragments.

But of course since Johnson Bob was unconscious the whole time, there was no human, or even sentient, observer.  That, the computer decided as the final rays of the perfectly symmetrical pattern of dissolution faded into empty space, was perhaps the most elegant feature of the apocalypse.  Perfection could only unfold unobserved.
***
©Rebecca M. Douglass, 2017
As always, please ask permission to use any photos or text. Link-backs appreciated!