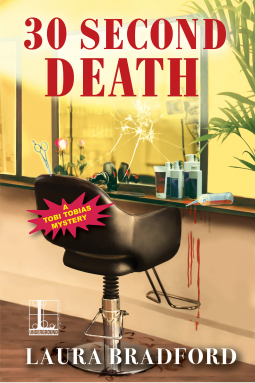 This one isn't a full tour, but it's a release-day review through Great Escapes!  I read and enjoyed (and reviewed) Death in Advertising, so I was excited to be able to do the second book in the series. Thanks to Lori at Great Escapes Free Tours for this opportunity.
Title: 30 Second Death
Author: Laura Bradford
Publisher: Lyrical Underground, July 2017. 212 pages.
Source: Electronic ARC from the publisher

Publisher's Summary:
To help an old friend, Tobi Tobias gets a third-rate thespian a part in a commercial, and learns that in the advertising business, bad acting can lead to murder . . .

When Tobi Tobias opened her own advertising agency, Carter McDade was there for her every step of the way. A brilliant hairdresser, Carter has just landed his dream project: doing hair and makeup for a theatrical production of Rapunzel. But the dream turns into a nightmare when he runs into Fiona Renoir, a cruel, talentless starlet who won’t let Carter touch a hair on her head.

To get Fiona out of Carter’s hair, Tobi hires the difficult actress for a bit part in her latest commercial. But true to character, Fiona is a terror on set, and Tobi is starting to think she’s made the biggest mistake of her life. But things get even worse when Fiona drops dead in the hairdresser’s chair, and the only suspect is the man left holding the tainted hair dye, Carter McDade. And unless Tobi can prove his innocence, he’ll never do hair in this town again.
My Review:
I think this was a stronger book than the first in the series (Death in Advertising). If you look at my review of that one, you'll see that I dinged it a bit for too-perfect characters. Not Tobi, but all her friends. I still think we all can dream of having friends as good as Tobi has, but in this book they seemed a little more real. The 15-year-old Sam is still a bit unbelievable (okay, he reminds me of the 15-year-old Brian from the early drafts of Death By Ice Cream, from before I had my own teens), but he's just quirky enough to pass.

The mystery itself was good. I did get an idea or two about whodunnit, but only found my way to the solution as Tobi did (as she uncovered the info that made it make sense), and I followed her off after all the wrong answers. Of course, I knew they had to be wrong, because it was too early in the book to be so sure, but even so, I believed her.

Dialogue is good, the romance continues to take up about the right amount of space (which is to say, not that much), and the writing overall is tight. My biggest concern now is that Tobi needs to get her diet under control, because her hatred of veggies and love of sugar is going to land her smack in diabetes-land. In all seriousness, I am a bit bothered by that, because in a way it normalizes a really unhealthy lifestyle. I figure the only reason Tobi isn't overweight is that she has had to walk everywhere, due to not having a car. Okay, I'm over-reacting, but it did bug me.

My Recommendation:
Definitely a good series for the reader who likes a cozy mystery without over-much kitsch or romance. The advertising angle is a good one that allows for innovative murders and lots of new characters, and no recipes (note: I have nothing against recipes, but sometimes they seem awfully gimmicky). Just don't eat like Tobi does, okay?
FTC Disclosure: I was given an electronic ARC of 30 Second Death for my honest review, and received nothing further from the writer or publisher in exchange.  The opinions expressed are my own and those of no one else.  I am disclosing this in accordance with the Federal Trade Commission's 16 CFR, Part 255: "Guides Concerning the Use of Endorsements and Testimonials in Advertising."
cozy mystery Great Escapes tours Laura Bradford mystery review Tobi Tobias