Flash Fiction Friday: There is No Exit

- July 14, 2017
This week's flash fiction challenge from Chuck Wendig was simply to write a story that used the phrase "there is no exit."

“I hate going down there,” Evan whispered as he and Owen entered the elevator cage and began the drop into the mine.

Owen jabbed his friend with an elbow before crossing himself. For good measure, he spat over his left shoulder, making sure he wouldn’t hit any of the other miners. It might be worse luck to spit on one of the older men than to speak of the fear they all felt underground.

Anyway, this mine wasn’t so bad. There was a mine over on the other side of the mountains, that went more than twice as deep. They said you could hear the mountain creak at that depth, and it was hot down there, so that men worked stripped to the waist. At least here they got some fresh air, by way of a network of old shafts.

For all that, Owen felt the familiar dread as the sun dropped away above and the lights on their helmets grew brighter in the darkness.

Owen and Evan had gone into the mine only a few months before, when they turned 14. Their birthdays were within a few days of each other, so they were able to start together, which made it less lonely. Not that the men were unkind. They were all neighbors and kin, and looked out for the boys. But there no other boys on their shift, so they stuck together.

The shift boss sent them down a small tunnel, away from the other workers that day.

“You boys are the smallest. You’ll be able to swing a pick in there without hitting the roof,” he told them, with a slap on Evan’s shoulder. “Someone will come along in an hour or so to pick up what you get loose, and give you a break.” He was Evan’s uncle and looked out for them.

Owen didn’t like the small tunnel. It felt cramped, and the air there wasn’t as fresh as in the larger spaces. But they set to work in the steady fashion they had already learned.

The other boy cocked a head, listening as well. A strange creaking troubled the mine, and the distant sound of the other miners died away as they, too, stopped to listen. Evan took a step toward the mouth of their tunnel, his eyes wide.

Then the world ended.

That was how it felt, anyway. The sound was overwhelming, and the shaking knocked both boys from their feet. Then came the wave of dust-filled air, choking them until Owen thought they would die of it.

Just in time the dust began to settle. Their lamps had gone out in the fall, and Owen reached shaking hands for his matches. He hadn’t ever had to light the lamp in the dark, but his father had made him practice until he could do it with his eyes closed every time. Now he found and struck the match, lit his lamp, and reached to light Evan’s as well. They found their lantern and lit it just as the match reached Owen’s fingers.

“Save your matches.” That was all Owen said, but it was enough. Evan followed Owen’s gaze to the heap of rubble near the mouth of their tunnel.

“It’s not blocked,” Evan said, his voice shaking as much as Owen’s hands. The boys rose and walked toward the pile of rock, the lantern swinging in Evan’s right hand.

The mouth of their tunnel was littered with rubble, but not blocked.

It was the main tunnel that was blocked, in the direction that led back to the elevator. The boys turned the other way. The men were working somewhere down there; perhaps they knew another way out.

Thirty or forty steps were all it took to crush those hopes.

Owen, aware his friend was right but unwilling to give up so quickly, returned to the first cave-in. He tried shifting a rock, and more fell. He jumped back.

“Better not do that,” Evan said.

“Is the other cave-in as bad?” Owen asked. He didn’t need to see Evan’s nod to know the answer.

“I told you, we’re trapped,” Evan said. He began to cry, fighting against it, then giving up.

Owen turned away, so as not to see his friend’s weakness, or perhaps in hopes that he wouldn’t join him.

As he did so, he saw the flame of the lantern waver a bit. “Evan!”

Both boys stared at the flame, seeing the flicker that suggested moving air. Then they began to move the lantern about, to find where the movement came from.

The moving air didn’t come from either end of the cave-in. It came from the face where they had been working. Excited now, they moved the lantern carefully about the face, until they located the insignificant-looking crack where the air flowed imperceptibly. Setting the lantern safely back from their work space, the boys began attacking the crack in the stone.

Owen had hoped to hear the sounds of digging on the far side of the wall, but no crack and thud of picks answered their own. Undeterred, he and Evan worked on. When the crack widened so that they could feel the air movement, they worked all the harder, confident now that at least they wouldn’t run out of air.

***
When the two boys emerged from a long-forgotten tunnel and dragged themselves, bone-weary, through the forest back to town, they were greeted as ghosts. They were the only miners to leave the mine that day.

“How did you do it? The tunnels were blocked for a dozen yards. There are men down there trying to dig through to the trapped miners, but they have made little progress. There’s no way out.”

“We were separated from the others,” Evan explained.

“So we made our own exit,” Owen concluded. 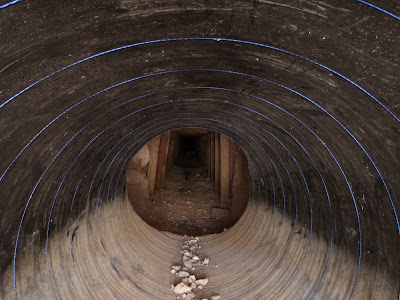