It's Flashback Friday, and time to pull something out of the archives that I think could stand a little more exposure. If you'd like to join the fun, clink on the image above to visit Michael d'Agonstino's A Life Examined blog and see how!

Things never work out according to plan when there are cats involved.  I knew that, and I should have known better than to take the job.  But Keelan made it all sound so easy: we just had to pick up the consignment from Alpha-Centauri 4 and take them to Exilion 17.  Four days, max, and two of them in hyperspace.

“What could go wrong?”  I should really have run when Keelan said that, because I know darned well that anytime those words are uttered a disaster is sure to follow.

Unfortunately, we needed cash, and the cat people had it.  So we went and picked up the load of cats.

That was where the trouble began.  They were supposed to be crated, sedated, and ready to be stowed in the cargo hold.  But when we arrived, a team of cat-wranglers was still chasing them around a pen.  We had to wait an extra three days for all of them to be properly prepared for flight.

Once they had them ready, things seemed to look up.  The crates were loaded, and all was quiet.  The cat people promised that they would not wake up before delivery, as long as we made delivery inside four days.  They gave us the base payment, and assured us that the farmers of Exilion 17 were desperate for rodent-control mechanisms, and would pay a bonus for prompt delivery.

The trouble began almost as soon as we left orbit.  Not only did an odor start to permeate the atmosphere, but I began sneezing.  We’d never smelled that odor before, but we knew what it had to be.  I contacted Feline Solutions and asked about it.

“Oh, yes, they do excrete some while in the sedated state.  It’s at a much-reduced level and should not be any problem in the short time you will have them aboard.”

“Why am I sneezing?”
“Some people do suffer allergic reactions to cats.  If your ship air system is working properly, this should not be a problem.”

I wanted to argue.  Our ship’s systems worked just fine, and not only was I still sneezing, but my nose was running.  My eyes itched, too.  Further, we had only just left Alpha-Centauri 4 and already the cats were “excreting” in quantities that made the whole ship smell.  There was something fishy about this deal.  At least we’d checked the crates; they really were full of sedated cats.

Keelan and I talked it over.  All we could think to do was to make the delivery as fast as possible, and hope the bonus would be enough to pay for a thorough cleaning of the ship.  The base payment wouldn’t cover much more than costs.

We spent the next day getting clear of the Alpha-Centauri system.  I spent half the day in the auto-doc, getting allergy treatments.  If you think that’s fun, you’ve never met our ’doc.  By evening, I was full of meds and we were ready to make the jump to hyperspace.  That was when the next problem hit.

Keelan found anomalies in the booster tests, and we ended up spending the next four hours running diagnostics.  The smell from the cargo bay was making both our noses twitch, and every hour’s delay reduced the chances we’d nail the bonus.  When we finally got it all fixed up, it was nearly midnight, and we had to check the programming three times, we were so tired.   The allergy meds didn’t help.

I suppose that was why I didn’t catch my error.  Everything checked out okay, and with a sense of relief, we hit the hyperspace button.

For the next two days, I alternated spending time in the ’doc and trying to adjust the filtration and air recycling system to get rid of the cat smell, as well as whatever it was about cats that I was allergic to.  The only thing we didn’t do was enter the cargo bay and check on the crates ourselves.  We’d been assured that there was no need for us to do anything; the crates would keep the cats sedated—in something like suspended animation, really—until arrival.  There were no user-serviceable parts.

Just when we were due to drop out of hyperspace, leaving us just a day of impulse drive to approach the planet, we made two discoveries.

I made the first one, which was nice, since I’d made the mistake in the first place.  Fortunately, my miscalculation was only in a single digit five spaces to the right of the decimal point, so it just meant we’d be spending an extra six hours in impulse drive.  That was bad enough news, of course, since we’d lost a similar amount of time on the other end.  We could certainly kiss the bonus goodbye, and the four-day sedation window was closing fast.

Keelan and I exchanged looks, but neither of us dared to say anything.  I’d made the mistake, but he’d uttered the fatal words, “What could go wrong?”  Maybe just to keep himself from making any comments about my work, Keelan took himself off to look into the cargo bay.  He came back at top speed.

“The cats!  They’re awake, and they, they,” he stuttered over the words, “they’re making kittens!”

“You mean there are cats mating in our cargo bay?”  It was a bit much, but no reason to get hysterical.

“No!  They’re having kittens!  All of them!  The blasted fools at Feline Solutions gave us a load of pregnant cats all due to give birth!”

My first reaction was panic.  My second was to read the cargo invoice very carefully.  When I’d finished, I looked up with the first smile since the fiasco began.  It would also be the last until it was over.

“We are contracted to deliver 325 female cats and 50 males.  It says nothing here about kittens or a state of pregnancy.  I think we might make a profit after all.”  Even after the deep cleaning.

“We sell the extra kittens on our own account?” he asked.  “Is that legal?”

“Then those cats need a midwife, to make sure they all survive.”  We exchanged a long look.

“I’m allergic,” I pointed out.

“I know nothing about childbirth,” he pointed out.

I would have given anything to be able to say I didn’t either, but I’m his mother.  “Program the kitchen to make chopped tuna.”  I took down my emergency respirator and positioned it carefully on my face.  “I’m going in.”

That’s how I came to spend the last day of the trip running a maternity ward for felines while Keelan handled the docking.  By the time we were done, we had three times the cats we started out with, I had a rash that itched for a week, and we ended with a substantial profit even after the deep cleaning.

Even so, I will never, ever, take cats on board again.  Despite the cleaning, the smell lingers.  And every now and then I break out sneezing. 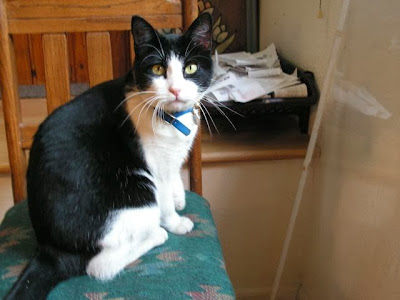