Fiction audio book review: The Summer Before the War 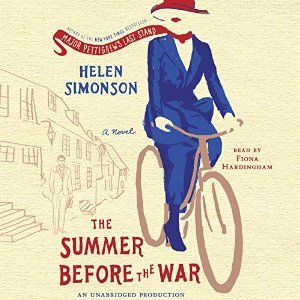 Publisher's Blurb:
East Sussex, 1914. It is the end of England’s brief Edwardian summer, and everyone agrees that the weather has never been so beautiful. Hugh Grange, down from his medical studies, is visiting his Aunt Agatha, who lives with her husband in the small, idyllic coastal town of Rye. Agatha’s husband works in the Foreign Office, and she is certain he will ensure that the recent saber rattling over the Balkans won’t come to anything. And Agatha has more immediate concerns; she has just risked her carefully built reputation by pushing for the appointment of a woman to replace the Latin master.

When Beatrice Nash arrives with one trunk and several large crates of books, it is clear she is significantly more freethinking—and attractive—than anyone believes a Latin teacher should be. For her part, mourning the death of her beloved father, who has left her penniless, Beatrice simply wants to be left alone to pursue her teaching and writing.

But just as Beatrice comes alive to the beauty of the Sussex landscape and the colorful characters who populate Rye, the perfect summer is about to end. For despite Agatha’s reassurances, the unimaginable is coming. Soon the limits of progress, and the old ways, will be tested as this small Sussex town and its inhabitants go to war.

My Review:
I enjoyed this story heartily. I admit that I thought for some reason that it was a humorous book, and indeed some parts, especially early on, do seem to be poking gentle fun at all the Downton Abbey fans. But ultimately, it's a well-written bit of historical fiction, with the story coming first and the romance growing organically if somewhat predictably from events (I have to say right here that I knew by the end of the first chapter who was going to marry whom. It was the rest of the story that was interesting).

There are a number of good subtexts in the book, regarding feminism (fairly obvious) as well as issues of homosexuality, racism, and serious class divides. Helen Simonson doesn't seem to be afraid to tackle any of those, while writing a good story at the same time. Beatrice, for example, wouldn't have the problems she does if her father hadn't written a rather Victorian will, which gave his daughter (his only child) the inheritance, but didn't give her control of it--her money is controlled by a trust until she marries, and there's damn-all she can do about it. I felt her frustration, maybe even more than she did--I really wanted her to break the will and get her hands on the money. :)

Other issues, especially the class issue, are even grimmer. The children to whom Beatrice is teaching Latin aren't actually expected to go anywhere with their educations, and various people make that clear to any child who gets "above himself." The effects of that are, in one instance, far-reaching and devastating. In the end, the book I began as a light-hearted romp, proved to be solid and a bit sobering. I give the author full credit for a well-crafted piece of historical fiction.

The narration is well-done, and had no technical glitches or anything else to distract from the story.

My Recommendation:
Despite what I said, I'll definitely recommend this for fans of Downton Abbey, and anyone else with an interest in the WWI era and the social complexities of that period. It's also not bad as a romance, not in the least of the steamy sort, just a story of lives that converge, and a bit of a coming-of-age novel, albeit the characters who are coming of age are already what we would think of as adults. They just have some growing up to do.


FTC Disclosure: I checked The Summer Before the War out of my library, and received nothing from the writer or publisher for my honest review.  The opinions expressed are my own and those of no one else.  I am disclosing this in accordance with the Federal Trade Commission's 16 CFR, Part 255: "Guides Concerning the Use of Endorsements and Testimonials in Advertising."
book review England historical fiction WWI