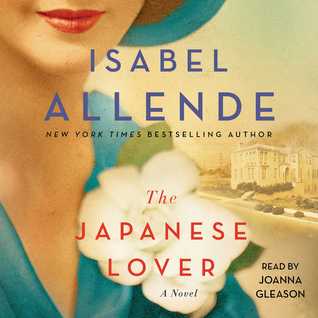 Publisher's Blurb:
In 1939, as Poland falls under the shadow of the Nazis, young Alma Belasco’s parents send her away to live in safety with an aunt and uncle in their opulent mansion in San Francisco. There, as the rest of the world goes to war, she encounters Ichimei Fukuda, the quiet and gentle son of the family’s Japanese gardener. Unnoticed by those around them, a tender love affair begins to blossom. Following the Japanese attack on Pearl Harbor, the two are cruelly pulled apart as Ichimei and his family—like thousands of other Japanese Americans—are declared enemies and forcibly relocated to internment camps run by the United States government. Throughout their lifetimes, Alma and Ichimei reunite again and again, but theirs is a love that they are forever forced to hide from the world.

Decades later, Alma is nearing the end of her long and eventful life. Irina Bazili, a care worker struggling to come to terms with her own troubled past, meets the elderly woman and her grandson, Seth, at San Francisco’s charmingly eccentric Lark House nursing home. As Irina and Seth forge a friendship, they become intrigued by a series of mysterious gifts and letters sent to Alma, eventually learning about Ichimei and this extraordinary secret passion that has endured for nearly seventy years.

Sweeping through time and spanning generations and continents, The Japanese Lover explores questions of identity, abandonment, redemption, and the unknowable impact of fate on our lives. Written with the same attention to historical detail and keen understanding of her characters that Isabel Allende has been known for since her landmark first novel The House of the Spirits, The Japanese Lover is a profoundly moving tribute to the constancy of the human heart in a world of unceasing change.

My Review:
Isabel Allende's reputation as a writer is deserved, and this book definitely wormed its way into my mind and stayed there while I was listening to it. It covers familiar ground in so many ways--I regularly bike through the Sea Cliff area of San Francisco where the Belasco mansion is set, and I have long known about the Japanese internment in WWII. Part of what attracted me to the book was the familiar geography it covers. What kept me reading was my desire to know and understand the characters.


I felt like I was getting to know the characters as one does in life--a little at a time, with constant revisions of my understanding. The initial view of most of them sets up assumptions about the kinds of people they were, assumptions that are gradually eroded, developed, and sometimes overturned. A big part of the reading experience ended up being me trying to decide if Alma is a good person or not. That sounds harsh, and I'm not sure if that was Allende's intention, but she is certainly complex and that led to my ambivalence about her.

My biggest complaint about the book is that it takes on too much, and tries to make too many characters central. We see the internment camp through Ichimei's eyes, but that is the only part of the book where he is central, and feels a little gratuitous. We are given more and more glimpses of Irina's life and issues, until I concluded that this is really her story, disguised as Alma's. Maybe it is, but if so, the balance feels off, and in the end she gets short shrift.

On reflection, the one thing that maybe runs as a theme through all the stories is love. What it is, how you find it, and what it means. In that way, the book works--but I'd still rather know more about Irina and what she is like inside, rather than Alma, who in the end I find a bit too self-centered and self-absorbed. Maybe that's part of the understanding we are meant to achieve.

My Recommendation:
This is (no surprise) a book well worth reading. It deals not only with the nature of love, but also of age, illness, racism, and suffering. I'm not convinced it's a great book, but there is a lot in there to think about for a long time after you finish, and that may be the definition of a good book.


FTC Disclosure: I checked The Japanese Lover out of my (digital) library, and received nothing from the writer or publisher for my honest review.  The opinions expressed are my own and those of no one else.  I am disclosing this in accordance with the Federal Trade Commission's 16 CFR, Part 255: "Guides Concerning the Use of Endorsements and Testimonials in Advertising."
historical fiction Japanese Internment love racism WWII