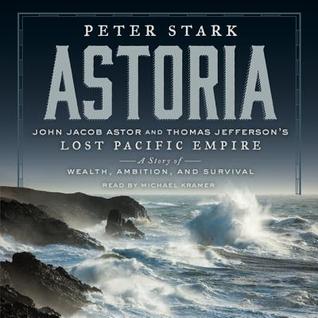 At a time when the edge of American settlement barely reached beyond the Appalachian Mountains, two visionaries, President Thomas Jefferson and millionaire John Jacob Astor, foresaw that one day the Pacific would dominate world trade as much as the Atlantic did in their day. Just two years after the Lewis and Clark expedition concluded in 1806, Jefferson and Astor turned their sights westward once again. Thus began one of history's dramatic but largely forgotten turning points in the conquest of the North American continent.

Astoria is the harrowing tale of the quest to settle a Jamestown-like colony on the Pacific coast. Astor set out to establish a global trade network based at the mouth of the Columbia River in what is now Oregon, while Jefferson envisioned a separate democracy on the western coast that would spread eastward to meet the young United States.

Astor backed this ambitious enterprise with the vast fortune he'd made in the fur trade and in New York real estate since arriving in the United States as a near-penniless immigrant, soon after the Revolutionary War. He dispatched two groups of men west: one by sea around the southern tip of South America and one by land over the Rockies. The Overland Party, led by the gentlemanly American businessman Wilson Price Hunt, combined French-Canadian voyageurs, Scottish fur traders, American woodsmen, and an extraordinary Native American woman with two toddlers. The Seagoing Party, sailing aboard the ship Tonquin, likewise was a volatile microcosm of contemporary North America. Under the bitter eye of Captain Jonathan Thorn, a young U.S. naval hero whose unyielding, belligerent nature was better suited to battle than to negotiating cultural differences, the Tonquin made tumultuous progress toward its violent end.

Unfolding from 1810 to 1813, Astoria is a tale of high adventure and incredible hardship, drawing extensively on firsthand accounts of those who made the journey. Though the colony itself would be short-lived, its founders opened provincial American eyes to the remarkable potential of the western coast, discovered the route that became the Oregon Trail, and permanently altered the nation's landscape and global standing.
My Review:
After that rather lengthy blurb, rest assured I won't go on as long with my review. I might take exception to some of what is said, or not  said, in the blurb, but the final paragraph is completely true: this is the story of a project that made some major strides toward opening the West, especially with regard to the routes through the mountains.
What isn't said in the blurb, but gradually becomes very clear as the book progresses, is that the difference between this expedition and the highly successful Lewis and Clark expedition couldn't be greater. Where Lewis and Clark exercised impressive leadership and brought their entire crew, and most of their scientific notes, back alive, the Astor mission was sent out with a commercial intent, and poor leadership led to deaths all along the way. And with profit as the primary motivation, not only for Astor but for those on the expedition, there seemed to be less reason to endure hardships, and men began falling away from the expedition as well.

The worst element, though, was the complete lack of understanding, empathy, or even humanity on the part of Captain Thorn, whose (what I see as) bull-headed arrogance cost the lives of pretty much his entire crew (and his own life, as well).

All of that said--I am condemning the venture, not the book. Mr. Stark presents the story intelligently and unfolds it well, with just the right amount of commentary to keep us from feeling he's a shill for the Astors. My main complaint about the book is that I'd have liked a little more on how the venture failed so miserably, yet ultimately led to the US settling and eventually owning the Northwest. Some of the explanation is in there (the overland party, or at least the return party, did discover a new and better route to the coast than what Lewis and Clark used), but felt a bit tacked on at the end. I could have used less about Astor's youth and more about the ramifications. After all, Astor may have initiated the project, and funded it, but he never left his comfy house in New York to traipse across the country (or beat around the Horn).

The audio narration is excellent, but I think that I'd rather have read the paper version, with (I presume) maps and all. Certainly anyone who doesn't know the area will be better off with those aides.

Recommendation:
Astoria is a good addition to the history of the Pacific Northwest, and a chapter about which I recall learning only the vaguest outline back in school in Washington. If you have an interest in the area, or wonder what it was like to settle in that lovely wet climate, read on!

FTC Disclosure: I checked Astoria out of my library, and received nothing from the writer or publisher for my honest review.  The opinions expressed are my own and those of no one else.  I am disclosing this in accordance with the Federal Trade Commission's 16 CFR, Part 255: "Guides Concerning the Use of Endorsements and Testimonials in Advertising."
Astoria audio books book review history Oregon Territory Pacific Northwest