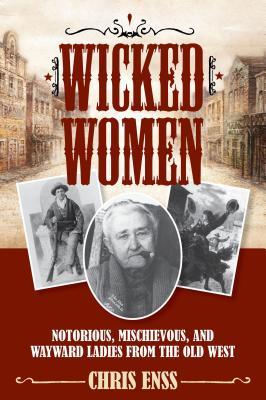 Title: Wicked Women: Notorious, Mischievous, and Wayward Ladies from the Old West
Author: Chris Enss
Publisher: TwoDot (Rowman & Littlefield), 2015. 209 pages.
Source:  I purchased this book at the Maturango Museum in Ridgecrest, CA.
Publisher's Blurb:
This collection of short, action-filled stories of the Old West's most egregiously badly behaved female outlaws, gamblers, soiled doves, and other wicked women by award-winning Western history author Chris Enss offers a glimpse into Western Women's experience that's less sunbonnets and more six-shooters. During the late nineteenth century, while men were settling the new frontier and rushing off to the latest boom towns, women of easy virtue found wicked lives west of the Mississippi when they followed fortune hunters seeking gold and land in an unsettled territory. Prostitutes and female gamblers hoped to capitalize on the vices of the intrepid pioneers. Pulling together stories of ladies caught in the acts of mayhem, distraction, murder, and highway robbery, it will include famous names like Belle Starr and Big Nose Kate, as well as lesser known characters."
My Review:
I'm always hunting up books like this in the little museums and park bookstores around the West. I like to get insights into what the time and place was really like (as opposed to the permanent imprint left on my impressionable adolescent brain by Louis L'Amour) by reading journals and other accounts of real lives of the times. In this book, Chris Enss uses a touch of imagination at the beginnings of most of the biographies, in an effort to paint the picture more clearly. She backs up the brief scenes with plenty of research, however, so I forgive her the literary license.
The women profiled are mostly prostitutes, so this is definitely not a book for young readers. Enss uses the expression from the period, and generally refers to the women as "soiled doves," though she is clear about what they are doing. I'm not sure how I feel about that euphemism; it does seem to contain a number of judgements, though for the most part there is no moral overlay on the book. In any case, the women's lives are interesting, and the research into the conditions that drove, or led, them into prostitution, gambling, and in a few cases outright outlawry are telling. Far too many of these stories contain the line "unable to find any other way to support herself..." That is an indictment of society that may still be too true today for some.
What I found most interesting were not the women who regretted their careers, but the ones who went into it with a clear and cold business sense. Many of the women portrayed were madams, and many made a lot of money running multiple brothels--maybe the one business women were allowed to run in the 19th Century, and the success many of them made of it suggests that they would have done even better if allowed to run legitimate businesses. Sadly, many of the women lost everything in the end, usually because they lost their hearts to the kind of men who frequented brothels and gambling dens. It did get painful to read that, time after time. The main variation was that they lost everything because the law shut them down, penalizing the women and ignoring the men who frequented the "bawdy houses."
In the end, the portraits felt a little too superficial, but I got a feel for their lives, and the bibliography provides lots of leads for further reading. I'd call it a decently done book of its sort.
My Recommendation:
Interesting reading for anyone interested in the history of women in the settlement of the US west. It makes a good companion to the women's diaries and letters (usually from more typical women) of the westward expansion that I have read in other sources.
FTC Disclosure: I purchased a copy of Wicked Women with my own money and of my own volition, and received nothing from the writer or publisher for my honest review.  The opinions expressed are my own and those of no one else.  I am disclosing this in accordance with the Federal Trade Commission's 16 CFR, Part 255: "Guides Concerning the Use of Endorsements and Testimonials in Advertising."
book review crime history US West