Mystery Review: A Pinch of Poison, by Alyssa Maxwell 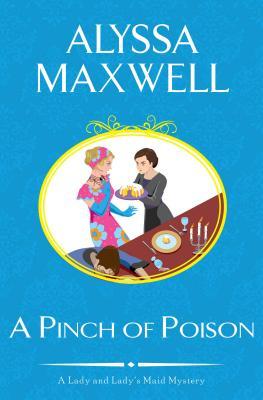 Good deeds build good character, and good character is what the Haverleigh School for Young Ladies is all about. Lady Phoebe—with the tireless assistance of Eva—has organized a luncheon at the school to benefit wounded veterans of the Great War, encouraging the students to participate in the cooking and the baking. But too many cooks do more than spoil the broth—they add up to a recipe for disaster when the school’s headmistress, Miss Finch, is poisoned.

The girls at Haverleigh all come from highly respected families, none of whom will countenance their darling daughters being harassed like common criminals by the local police. So Lady Phoebe steps in to handle the wealthy young debutantes with tact and discretion, while Eva cozies up to the staff. Did one of the girls resent the headmistress enough to do her in? Did a teacher bear a grudge? What about the school nurse, clearly shell shocked from her service in the war? No one is above suspicion, not even members of the school’s governing body, some of whom objected to Miss Finch’s “modern” methods.

But Lady Phoebe and Eva will have to sleuth with great stealth—or the cornered killer may try to teach someone else a lethal lesson.
My Review:
First the business: I was approached by the publisher with the offer to recieve an advance review copy of this book because I reviewed the first in the series, Murder Most Malicious last December, through a Great Escapes Free Tour. In neither case did I receive any payment beyond the electronic ARC. I'm scheduling this for Jan. 2, as the release date is supposed to be Jan. 1.
Okay, on to the good stuff. I enjoyed the first in this series, though I had some issues with it (see review). This second book is, I think, an even stronger work. The author is working in one of my favorite times and places (England between the wars), and has done her research well. Fans of the first couple of seasons of Downton Abbey will probably enjoy this, and will be able to bring the visuals from that series to mind to add color to the setting. Ms. Maxwell has done her research, and presents the period well, and I was not struck by any anomalies or anachronisms.
I noted in my review of the first book that I had some trouble with sorting out characters in the beginning and with the POV switches between Lady Phoebe and her maid, Eva. Both of those problems were gone this time (and might have been more my problem than the writer's in the first book). I had forgotten most of the details of Murder Most Malicious, but the author provides enough context that it would work to start with this one, though I always advocate reading a series in order if possible. The author focused well on a few characters, and that I think is a strength, as anyone who really matters is well-drawn, to the extent of the understanding of Phoebe and Eva (so the male leads, as it were, are a little opaque, because the girls are still trying to figure them out). The suspects are nicely developed, and get more so as Phoebe and Eva come to understand them better.
It's worth a comment on the narration, which is third person limited throughout, but alternates point of view chapter by chapter between Phoebe and Eva, with occasional shifts between scenes in the same chapter. The author has handled this well, and there are cues given each time the shift takes place, to keep it clear. I enjoy seeing the different ways the two young women view other people--they are very much influenced by their stations in life, even as each tries hard to see beyond those limits. There is a very nice thread of early feminism as well.
And what of the mystery? It is solid, with a number of convincing suspects and lots of secrets, lies and motives. I saw my way to a very small part of the truth early on, but missed the perp and a lot of the complexity of motives. Most of the lies and secrets tied in to the murder one way or another, but just enough didn't to keep it believable--not every lie comes from a fear of being implicated in murder.
My Recommendation:
This is shaping into a strong cozy series, and anyone who enjoys the classic British country house mystery will enjoy it. Also recommended to fans of Downton Abbey, the 1920s in general, and mysteries that showcase developing relations of all sorts, not just romance (so far, the romance is pretty secondary, with signs that it will ramp up in future). 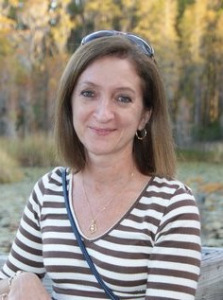 Alyssa Maxwell has worked in publishing as an assistant editor and a ghost writer, but knew from an early age that being a novelist was what she wanted most. Growing up in New England and traveling to Great Britain fueled a passion for history, while a love of puzzles of all kinds drew her to the mystery genre. She lives in South Florida in the current year, but confesses to spending most of her time in the Victorian, Edwardian, and post WWI eras. In addition to fantasizing about wearing Worth gowns while strolling manor house gardens, she loves to watch BBC and other period productions and sip tea in the afternoons.
FTC Disclosure: I received an ARC of A Pinch of Poison from the publisher, and received nothing further from the writer or publisher in exchange for my honest review.  The opinions expressed are my own and those of no one else.  I am disclosing this in accordance with the Federal Trade Commission's 16 CFR, Part 255: "Guides Concerning the Use of Endorsements and Testimonials in Advertising."
1920s British mysteries English Country Houses mystery review WWI