- January 12, 2017
Chuck Wendig is finally back on the job with our weekly challenges, and for reasons that don't take a lot of parsing, our challenge this week was to write an apocalypse. We weren't supposed to do the usual apocalypse, though, but instead to come up with a whole new sort, which I didn't really do. Instead, I picked up on something he said about writing "your uniquely-you" apocalypse, and that got me to thinking about how one person's world can end while everyone else's goes on. I was also thinking about the book I just finished about "Wicked Women" of the frontier, and got some ideas going in my head. So you don't really get a story about an apocalypse, just one human's personal end of the world, in right about 1000 words.

I read the book of Revelation when I was a little girl, and found there a story of how the end of the world that turned out to be rubbish. Well, I don't actually know that. It’s just that we don’t get to see THE WORLD end very often. But I know that worlds end every day. What matters is what happens next.

My world ended on a March afternoon on a pass in the Rocky Mountains, standing in the snow next to what was left of a train. An avalanche had come down and caught the tail end of our train, putting a halt to forward progress for the time being, as everyone gawked over the edge of a cliff .

“It’s not so bad. Just the caboose and one car,” the conductor said. "Not the end of the world."

“It sounded like the end of the world when that snow came down, but I reckon you're right. Joe wasn’t in the caboose,” the fireman answered, and they walked off.

It wasn’t much to them. But that car had been carrying passengers, the ones with cheap tickets. It had gone over the cliff under a load of snow, and I wasn’t fool enough to think anyone in it would be dug out alive, if they were dug out at all. But I wanted to run down there anyway, because that car had held my world: my family. That one car lost was the end of the world, as far as I was concerned.

I wasn’t dead because I was always wandering off when I shouldn’t, as Ma would say. Only, this time, I guess it was good that I did, though just then I wished I’d died when the world ended.

But I’d been off in the observation car with the friends I’d made in my wanderings. I wasn’t supposed to be there, but Belle and Suzy were bent on showing me the sights. I guess they hadn’t had a youngster to play with for a long time, and we were having a good time admiring the new snow, when we got knocked down by a sudden stop.

I don’t think I understood how completely my world had ended until the rescue train came. That was when the railroad people discovered that I was supposed to have been in the car that was lost, and that now I was an orphan. I probably wasn’t supposed to hear their discussion of what to do with me.

“We can take her on into town and find someone to take her in.”

“Let Belle and Suzy take her with them. Kate’s always got room for one more.”

“She’s too young. Look at her. Just a skinny kid!”

“Some like 'em that way.” The men shrugged and moved off, leaving me shaking with cold, fear, and fury.

I wasn’t stupid. I’d learned a lot from Belle and Suzy on the long train trip, and I knew what they did for a living. I remembered Belle telling me, “The ones with weird tastes, those are the ones to watch out for. Me and Suzy, we’ve learned. We won’t do any of that. It just leads to a heap of hurting.” I was pretty sure that a skinny 12-year-old would be in for a heap of hurting in their business.

So before I even got on that train, I vowed that whatever I did, I wouldn’t go to Kate. I’d find my own way.

I started by insisting that they not put me off the train in that tiny mountain town. Our tickets had been through to San Francisco, and I wouldn’t take no for an answer. Then I said that the railroad owed me for the luggage I’d lost. I got lucky there.

The storm that ruined our train trapped everyone in town for a week. The one hotel wasn’t big enough to give me a room of my own, and since I wouldn’t let them send me to the “boarding house” with Belle and Suzy, the railroad folks found a couple from the train to take me in.

The luck came when I found out that Mr. Carlyle was a lawyer. He had his own grudge against the railroads, though I never found out what it was, and he said he liked a challenge. So he set to work on my case, and he didn’t drop it or me when we got to the coast. I went on staying with him and his wife while he fought the railroad, and got me a nice cash settlement, not just for my baggage, which was all I’d thought about, but for the loss of my family. I didn’t think the weather was the railroad’s fault, but Mr. Carlyle said that the pass was known to be unsafe in winter, so it was a matter of poor judgment to have sent the train over it in a snowstorm, and he made the case that they did it to save the cost of delays, and for a wonder the judge agreed.

With the winnings, I set myself up in business. That wasn’t easy to do, being female and young, but I was stubborn. I also let Mr. Carlyle help me. He was male and old—fifty, at least—and it wasn’t so hard for him. Never mind what business; it was profitable and I was good at it.

By the time I was 16, I was had built a new world from the remains of the one that ended on Rollins Pass. I’d grown and filled out, and I could pass for 21, which let me take control of my empire when Mr. Carlyle died that winter. I promised to take care of his widow, and I did, even after the world ended again.

It wasn’t just my world that ended that April. The flames that ate San Francisco after the earthquake devoured my business and my home, and sent me to a tent in Golden Gate Park with Mrs. Carlyle in tow. Plenty of people thought it was the end of the world, but I knew better. Worlds never end, not really. And this time I knew how to rebuild.

###
I'm sorry I have no photos of a train in the snowy mountains. But here are a couple of a mountain train ride, followed by some nice snowy terrain! 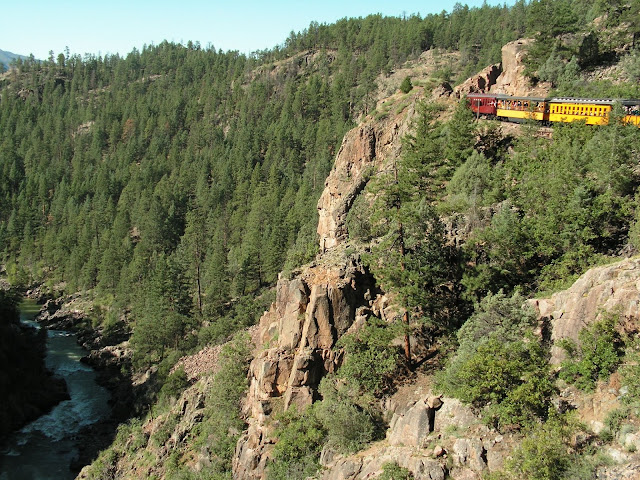 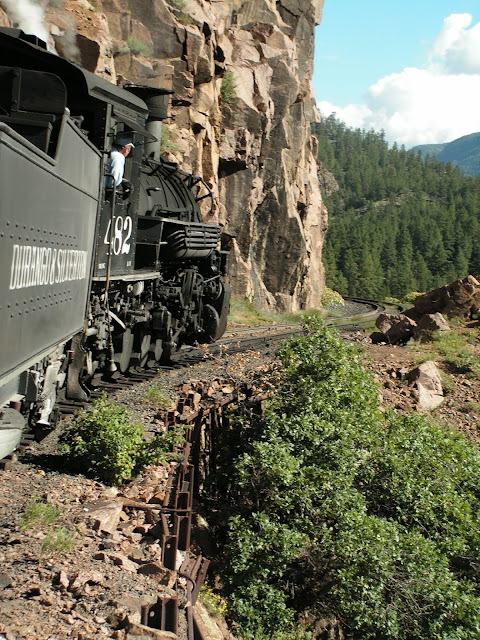