It's the last Flashback Friday of the year (and a very convenient time to have it, as the author is visiting family and far too focused on over-eating to write a new story this week). Flashback Friday is the brainchild of Michael D'Agostino; to learn more, click on the banner above!

To stick with the spirit of the season, I found the original flash-length version of "Halitor at Midwinter." A longer version appears in the Bookelves Anthology, Vol. 2, along with six other winter tales by authors of wonderful books for middle-grade readers (as we like to say, for 10-year-olds of all ages).

But for now, enjoy a cold night with Halitor.

Halitor the Hero stared gloomily into his fire and sighed. He remembered how it had been this time last year. He’d been warm, for one thing. Snow had been falling then, just as it did now, but he’d been in Alcedor Castle, with Melly and the king and all the court, enough people and enough fires to make even a drafty old castle warm.

Now it was Midwinter’s Eve, the time of year when everyone gathered with family and friends and celebrated the return of the sun—or celebrated to ensure the sun would return. Some said the parties determined how the year would come out.
Halitor really hoped that wasn’t true. If it was, he was probably ruining the year for scores of people. And he was supposed to be a Hero, making their lives better! He poked the fire, added another stick, and huddled closer. His horse moved in to enjoy the warmth, too.

“Come on in, Nightwind,” Halitor told the animal. “Maybe if I make your life a little better tonight it will keep the bad luck away. If I’d been smart, I’d have given up my quest and gone back to the castle for Midwinter.” The horse snorted. He knew as well as Halitor that they had traveled much too far to return for the holiday. And, the young Hero reminded himself, along the way he had managed to do some good. He’d rescued a family from ogres, and arrived at an isolated farm in time to help put out a fire that threatened house and barn. He steered his thoughts away from some less heroic events.

Now he was in the sparsely populated lands in the farthest mountains of Kargor, and apparently a lot higher than he’d meant to be. He looked into his saddlebags, extracting a bag of beans and spices, and poured a handful into the pot of water coming to a boil over his fire. He’d had no luck hunting, not for days. Animals had more sense than to be out in this weather. His Midwinter feast would be another pot of watery bean soup.

He’d known worse. And the shallow cave that Nightwind had found offered more shelter than they’d had for days. Halitor smiled in spite of himself. He was cold and wet and hungry, but he was a Hero, by heaven he was! In the morning, if the storm had blown itself out, he’d ride on and find that village he’d heard of, the one with the wyvern problem. That settled, he ate his dinner, wrapped himself in his blanket, and went to sleep.

It wasn’t yet light when something nudged him awake. A foot. An experienced Hero like Halitor knew that it was never good when someone woke you up with a toe. That kind was always an enemy.

In this case, the enemy was a boy about nine years old. Halitor looked from the pale and very young face to the bare foot that had kicked him. A bare foot? In this blizzard? He started to sit up.

“Just you stay put, mister.” The voice was as tough as a treble could be. Halitor would have ignored the command, but the boy looked scared, which meant that he might do something foolish. It also meant that he could use a little encouragement. Halitor knew all too well how it felt to be over his head.

“Right. I’m your prisoner, then. Would you like some breakfast?” Halitor didn’t know what time it was, but when you were a little kid and barefoot in the snow, it was a safe bet that it was mealtime. “If you let me sit up I’ll fix us something.”

The boy hesitated. He edged a bit closer to the fire, and made up his mind. “Very well. But don’t do anything foolish.” Halitor sat up very carefully, happy to see that for once his captor wasn’t pointing his own sword at him. The boy had only a sharp stick. And behind him there were three more children, each younger than the previous.

“Da always said no one but a bandit would be out in the woods on Longnight,” the second child said.

“We are,” pointed out the third child. The fourth just stood there shivering, a finger in his mouth.

“Getting storm-caught can happen to anyone,” Halitor said with the sort of cheer he saved for desperate situations. He no longer worried he was in danger. But as a Hero, he had to find a way to save these waifs from the storm. “Sit up to the fire.” He handed the second child—the only girl—his blanket. “Wrap up together, all of you.” After a second look, he took off his cloak and gave that to her as well, then built the fire back up.

Only when the food was ready did the oldest lower his stick and sit in with the others. “Don’t forget, you’re my prisoner,” he told Halitor.

“I won’t,” the Hero promised. “See? I’m doing your bidding, making you something to eat.” When the child’s mouth was full, Halitor asked, “How did you all come to be wandering from home on Longnight, and in such a storm?”

Stick scowled and wouldn’t answer, but Girl spoke up. “We got no home. Not no more. Wyverns come and wrecked it.”

Halitor kept feeding the children, even though he was nearly out of food, and kept them talking until daylight, and until he had a pretty good idea where their village might be. When at last they were warm and well-fed, he stood up. Instantly Stick was on the alert again.

“Let’s get going,” Halitor said, ignoring the bristling child. “We need to get you back to your village before Midwinter is over!”

He loaded the children onto Nightwind, wrapped the blanket around them, and led off through the snow, trying to ignore his own cold feet.

“Mister?” It was the littlest child, finally without the finger in the mouth. “Are you the Longnight Spirit? The one who brings gifts to little boys and girls?”

Halitor shrugged to himself. A Hero was what he needed to be. 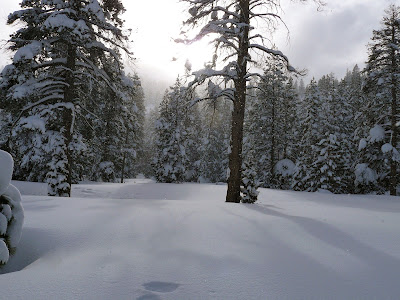 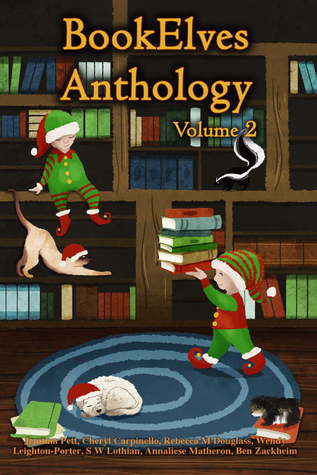 ©Rebecca M. Douglass, 2013
As always, please ask permission to use any photos or text. Link-backs appreciated!