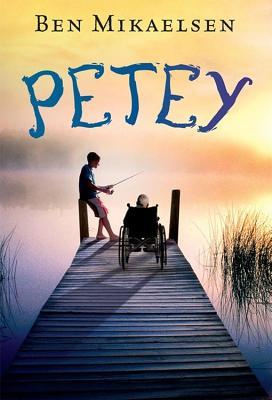 Title: Petey
Author: Ben Mikaelsen
Publisher: Disney-Hyperion, 1998. 280 pages
Source: School district book giveaway. (Book was leftover and is en route to other young readers, lest anyone think I was snatching books meant for our children).

Publisher's Summary:
In 1922, at the age of two, Petey's distraught parents commit him to the state's insane asylum, unaware that their son is actually suffering from severe cerebral palsy. Bound by his wheelchair and struggling to communicate with the people around him, Petey finds a way to remain kind and generous despite the horrific conditions in his new "home." Through the decades, he befriends several caretakers but is heartbroken when each eventually leaves him. Determined not to be hurt again, he vows to no longer let hope of lifelong friends and family torment him.

That changes after he is moved into a nursing home and meets a young teen named Trevor Ladd; he sees something in the boy and decides to risk friendship one last time. Trevor, new to town and a bit of a loner, is at first wary of the old man in the wheelchair. But after hearing more of his story, Trevor learns that there is much more to Petey than meets the eye.

Petey is a touching story of friendship, discovery, and the uplifting power of the human spirit.

My Review:
I zipped through this in pretty much two sittings. That's partly because it's not a terribly long book, but is more because it is a gripping (and heartbreaking) book. Reading of the conditions of Petey's life really did hurt. The author uses an almost reportorial style for that section of the book, with bits told from the perspective of a few caregivers who come to know Petey (and gradually to see that he is not "retarded," but is in fact intelligent, though barely able to speak due to his CP). We get glimpses, as well, into Petey's own mind, and gradually (as he ages and matures) get more and more of that. The result is a wrenching recognition of the pain of being trapped inside a body that will do nothing he asks of it, even communicate, in a world that for the most part doesn't think he's even capable of thinking.

In the second half, the point of view shifts to Trevor, in 1990. It is similar to the glimpses we got of caregivers through the years, but we have a more complete understanding of Trevor, as he does become the focus of the book. The second half is more about the boy than the man, as Petey becomes, instead of a figure of helplessness with people coming and going out of his control, an active participant in his own life--and Trevor's.

I'm not sure that the relationship between Trevor and Petey, or the transformation of the boy, is 100% believable, but it works, and the result is a story that made me cry.


My Recommendation:
I waffled a bit about putting this in juvvy or YA. I went with the library's category, but there are some things to be aware of. The first half of the book is set from the 1920s to the 1970s, and both depicts all too grimly the conditions in which a severely handicapped person lived in that era, and the language with which they were described (including words we no longer use). But the overarching message of the story is very good, and any questions about terms can be discussed with young readers.

FTC Disclosure: I picked up a copy of Petey at a book give-away event (see above), and received nothing from the writer or publisher in exchange for my honest review.  The opinions expressed are my own and those of no one else.  I am disclosing this in accordance with the Federal Trade Commission's 16 CFR, Part 255: "Guides Concerning the Use of Endorsements and Testimonials in Advertising."
disability middle grade books relationships