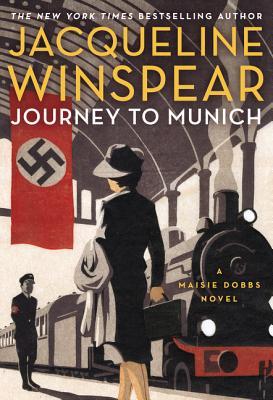 
Publisher's Summary:
It’s early 1938, and Maisie Dobbs is back in England. On a fine yet chilly morning, as she walks towards Fitzroy Square—a place of many memories—she is intercepted by Brian Huntley and Robert MacFarlane of the Secret Service. The German government has agreed to release a British subject from prison, but only if he is handed over to a family member. Because the man’s wife is bedridden and his daughter has been killed in an accident, the Secret Service wants Maisie—who bears a striking resemblance to the daughter—to retrieve the man from Dachau, on the outskirts of Munich.

The British government is not alone in its interest in Maisie’s travel plans. Her nemesis—the man she holds responsible for her husband’s death—has learned of her journey, and is also desperate for her help.

Traveling into the heart of Nazi Germany, Maisie encounters unexpected dangers—and finds herself questioning whether it’s time to return to the work she loved. But the Secret Service may have other ideas. . . .

My Review:
Winspear has been moving this series more and more toward suspense/international intrigue and away from classic mystery. That's not necessarily good or bad, but it does change things, and I personally kind of miss the feel of the early books.

That said, it's fascinating to watch Maisie grow and mature as she approaches (dare I say it?) middle age. I'm not sure I approve of everything Winspear has done to our hero, but there's no denying it keeps her interesting. So Maisie, having taking the unlikely leap away from her career to be a wife and mother, gets that ripped from her, and has to figure out how to go back to being happy in a career. As it turns out, part of that question will be seeing how she handles espionage.

I have to say that I'm not sure Maisie handles it well. Some parts are excellent, but she seems to make--and get away with--some very dubious choices. She creates a case map in her Munich hotel room. Fine. That's how she thinks. But she doesn't destroy it, and as far as I can tell leaves it in the room when she potentially is not coming back. She has also carried with her at least one object that would, if discovered, blow her cover. And, despite the scrutiny she's under, this doesn't happen. No one searches her room. It stretches belief a bit.

But: I have to admit that I noticed those things in retrospect, not at the time (well, okay, the case map worried me at the time. I expected it to turn up again in the story, as something that put her in great danger). For the most part, Winspear's writing is good and keeps the reader engaged and buying into the story as you go, despite the weaknesses.

Finally, I wanted to note that the books have moved from one era to another. It's still "between the wars," but in 1938 it is much more about the approach of WWII (the rise of the Nazis) than about the aftermath of WWI. That doesn't really matter, other than that I like the earlier period of history. It does present Winspear with new challenges, as she needs to track the changes in the world during that period!

Recommendation:
If you are reading the series, you won't want to miss this. But this is a series to read in order. There is a lot of background and character development you won't want to miss as we follow Masie over the years. And if you prefer your mysteries classic, this one might disappoint, though there *is* a mystery she has to solve.

FTC Disclosure: I checked Journey to Munich out of my library, and received nothing from the writer or publisher in exchange for my honest review.  The opinions expressed are my own and those of no one else.  I am disclosing this in accordance with the Federal Trade Commission's 16 CFR, Part 255: "Guides Concerning the Use of Endorsements and Testimonials in Advertising."