Mystery Review: Body on the Bayou

Publisher's Summary:
The Crozats feared that past murders at Crozat Plantation B&B might spell the death of their beloved estate, but they’ve managed to survive the scandal. Now there’s a très bigger story in Pelican, Louisiana: the upcoming nuptials between Maggie Crozat’s nemesis, Police Chief Rufus Durand, and her co-worker, Vanessa Fleer.
When everyone else refuses the job of being Vanessa’s Maid of Honor, Maggie reluctantly takes up the title and finds herself tasked with a long list of duties–the most important of which is entertaining Vanessa’s cousin, Ginger Fleer-Starke. But just days before the wedding, Ginger’s lifeless body is found on the bayou and the Pelican PD, as well as the Crozats, have another murder mystery on their hands.
There’s a gumbo-potful of suspects, including an ex-Marine with PTSD, an annoying local newspaper reporter, and Vanessa’s own sparkplug of a mother. But when it looks like the investigation is zeroing in on Vanessa as the prime suspect, Maggie reluctantly adds keeping the bride-to-be out of jail to her list of Maid of Honor responsibilities in Body on the Bayou.
My Review:
This was a good, fun read! I enjoyed the story, and was caught up in it from almost the beginning. Though this is the second book in the series, I didn't feel like I was missing anything or confused about characters--just enough was explained as we went along (and I can go read the first book without having had it spoiled for me, either).

The mystery is well constructed, though I had my suspicions about the guilty party early on. I lacked any idea of the motive, of course--that was a big part of what Maggie had to work out. And there were some other lovely suspects, including some that I wouldn't have minded seeing become the victims (see: Bridezilla and her mother. Deliciously awful!).

Relationships are as important in a cozy mystery as is the mystery, and Ms. Byron has done them well. I had to wonder a bit about why Maggie is even friends with Vanessa (a.k.a. Bridezilla), but most of the rest made sense, and people were fairly 3-dimensional. The romantic interest ran at about the right level for me--not the central feature of the story, but present. It might have been a little too fraught, but just when I wanted to shake Maggie and insist that she actually speak her worries aloud, she did that, thus saving herself from my wrath. (I lose patience with romantic angst that could be cured with a little honest conversation.)

Finally, the story is well-written and well edited (I think I found one error, so better than average). The author has a good ear for writing. I don't know anything about the Cajun country, and I didn't get a real complete feel for it from the book, but it had just enough of a setting to give a flavor.

Recommendation:
For those who enjoy cozy mysteries that have a solid mystery as well as a lot of fun! 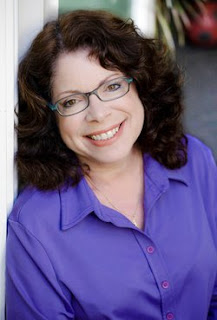 , will be available in September 2016. Ellen’s TV credits include Wings and Just Shoot Me; she’s written over 200 magazine articles; her published plays include the award-winning Graceland and Asleep on the Wind. Ellen Byron is a native New Yorker who lives in Los Angeles and attributes her fascination with Louisiana to her college years at New Orleans’ Tulane University.

There's a giveaway, too!
a Rafflecopter giveaway

FTC Disclosure: I received a free electronic review copy of Body on the Bayou. I received nothing further from the writer or publisher in exchange for my honest review.  The opinions expressed are my own and those of no one else.  I am disclosing this in accordance with the Federal Trade Commission's 16 CFR, Part 255: "Guides Concerning the Use of Endorsements and Testimonials in Advertising."