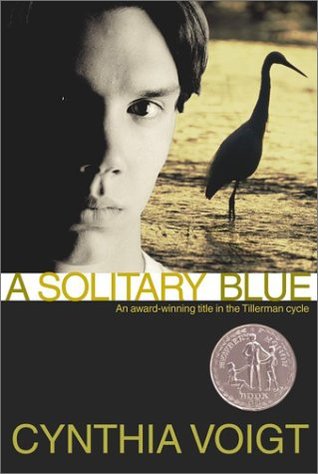 Title: A Solitary Blue
Author: Cynthia Voigt; Narrated by Jeff Woodman
Publisher: Recorded Books, 2011. Original: Atheneum, 1983. 204 pages.
Source: Library digital resources
Publisher's Summary:
Jeff Greene was only seven when Melody, his mother, left him with his reserved, undemonstrative father, the Professor. So when she reenters his life years later with an invitation to spend the summer with her in Charleston, Jeff is captivated by her free spirit and warmth, and he eagerly looks forward to returning for another visit the following year.
But Jeff's second summer in Charleston ends with a devastating betrayal, and he returns to his father wounded almost beyond bearing. But out of Jeff's pain grows a deepening awareness of the unexpected and complicated ways of love and loss and of family and friendship -- and the strength to understand his father, his mother, and especially himself.

My Review:
I struggled with this review, because I both really liked the book and felt like there is a deep flaw. More on that in a bit.
This is the 3rd book in the Tillerman series, and at first I didn't think it was much connected, though Jeff is a minor character in Dicey's Song. It looked like this was just his story, but it does connect to the Tillerman's story and moves it forward, as well. But the main character and the focus of the book is Jeff, and the strange childhood that makes him the boy he is when Dicey meets him. I found Jeff a compelling character, and the narrative style of both the writer and the reader--it's a powerful audio book--makes him distinctive and unforgettable.
The book takes us from the time Jeff's mother leaves--at age 7--until he's nearly through high school, and we see all the relationships through Jeff's eyes. So we have his naive belief in his mother's dedication to "causes," his fierce love of her and obsession with her when she returns to his life (a bit oedipal, but it kind of makes sense), and then the equally fierce anger and even hatred when he realized that she isn't at all what he believed. And we watch him turn to the one thing that he never knew could help make up for missing parents: nature, and especially the sea.
The flaw in the story comes with Jeff's relationship to his father, which feels a little unbelievable on both ends. That is, through most of Jeff's childhood, his father is beyond "distant." He's completely disconnected and unbelievably willing to believe that the boy can manage without him. And then...when Jeff has a crisis and the depths of his disturbance are forcibly brought home to the Professor, they are somehow able to connect in a way that seems to erase all the years of neglect. I guess I'm not wholly a believer that age 13 (or so) is one where that kind of miracle can happen so easily. Why doesn't Jeff have any resentment of his father's neglect and emotional absence? It's hard to buy.
That said, I'm glad he doesn't, because the two seem to have worked out an interesting life that makes Jeff a good fit with the Tillerman family!
Recommendation:
Read this, but read the books in order, and be prepared to be frustrated with a couple of pretty bad parents. The reader, even a middle-grade reader, will be aware that people are not what they appear, long before Jeff is, and will feel some pain and discomfort while waiting for him to see the truth. Melody's character makes this book tend a bit more toward YA than middle grade, so I'd say ages 12 and up, even though there is no sex or violence.
FTC Disclosure: I checked A Solitary Blue out of my library, and received nothing from the writer or publisher in exchange for my honest review.  The opinions expressed are my own and those of no one else.  I am disclosing this in accordance with the Federal Trade Commission's 16 CFR, Part 255: "Guides Concerning the Use of Endorsements and Testimonials in Advertising."
coming of age parents Tillerman Saga