- October 07, 2016
I picked up the prompt for this one from a random title generator several weeks ago. It took a number of false starts before I managed to get something like a story. Enjoy a little venture into the unknown, or maybe just a love story.

No one could say just when the girl came to the village. She appeared silently among the other children one day, attended the school without ever making a sound, and vanished at the end of the day. People couldn’t remember when she first came, only realizing that she was there after she had become a part of the scenery. Silence does create a sort of invisibility.
None knew who she was or where she came from. Eventually they stopped wondering and just accepted her. They gave her a name, because she would not—or could not—say what she wished to be called. So “Lily” went on, moving silently among the people, and grew to be a young woman. And still no one knew—as they suddenly realized—even so much as where she lived, where she went at night when she left the other young ones. Most shrugged and let it be. They had lives to live.
One villager, however, wasn’t satisfied. The young man Kerlin had watched Lily grow, and watched, and wondered.
Kerlin was a bit different himself. He and his father—a man almost as silent as Lily—lived in a hut well back in the forest, and the villagers left them alone. That suited Kerlin most of the time, and his father all the time. But for all that, Kerlin couldn’t let Lily alone.
Not that he pestered the girl. He just...watched.
As Lily grew older, she grew beautiful. Kerlin wasn’t the only young man to notice this, but he was the only one who cared enough for her beauty not to be put off by her silence. He began to follow her, to try to learn where she lived. He knew she was aware of him, because she became ever more elusive, vanishing into the woods at odd points, darting behind a tree or into a dense thicket without a trace.
Kerlin began to wonder at Lily’s ability to vanish. He tried again and again to track her through the forest, but she left no tracks for him to follow.
“Leave it,” advised the village elders. “Some things should not be known.”
Kerlin was a young man in love. Leaving it be was not an option. He continued to pursue Lily in his own way, as silent as she was. What would be the use of trying to talk to a girl who could not, or would not, talk? But however much he followed her, he never discovered so much as what direction she went to her home.
If she had a home.
Kerlin knew what some of the villagers said: that Lily was a witch, or even a spirit of some sort. In his heart, he feared that someday soon, when they realized she was no longer a child, there would be trouble. Someone would suffer some misfortune and blame it on the girl, because a witch was always a way to avoid admitting to bad luck or bad management.
He became desperate to discover who she was, where she came from, to find her family and prove that the girl was no witch. Or, at the worst, he could help her to go far from the village and start a new life, somewhere safe.
##
So it was that on a dusky winter afternoon Kerlin followed Lily far into the forest. For once she made no effort to disappear or to lose him, nor did she ever look back to see if she followed. He supposed she knew he was there; he was no ghost to move through the forest without so much as a sound. His heart leapt at the thought that at last she was going to allow him to see her home.
They walked a long way, the girl in front, the young man always trailing just close enough to keep her in sight, never noticing that the afternoon turned to evening. Only when he found himself tripping, unable to see the ground beneath his feet, did he realize that it had grown dark, and yet he could still clearly see the girl, always in front of him, always too far off to reach.
Now he knew that Lily was, indeed, a witch or a sprite or something unhuman. And he didn’t care. He loved her, and he wanted her. He kept following.
Kerlin had long since stopped thinking and merely followed, when Lily stepped into a clearing and stopped. He hurried to catch her, and, rushing into the clearing, he found himself in a great hall, lit by a thousand candles and peopled with hundreds of men and women with the same beauty as drew him to Lily.
The crowd of beautiful people parted, and there, on a low dais, stood his father…hand in hand with the mother who had died when Kerlin was small
“Am I in the land of the dead?” he asked, bewildered.
“No, my son,” his mother said, coming toward him. “You are in the land of your own people.”
He could only look his questions. To his amazement, it was Lily who turned to him and explained.
“You are the prince of the faerie realm. But you had to live among the humans to learn what the prince must know, and you had to come back to faerie of your own accord.”
Kerlin couldn’t open his mouth or make a sound.
His father smiled, and it was the first time Kerlin had seen the man smile since his mother died—or didn’t die. “Lily was sent to lure you to us, as your mother brought me long ago.”

At that, Kerlin turned, and the young woman smiled, holding out a hand. Dazed, he took the hand, and found his tongue.
“For you, I would have gone anywhere.”
###
©Rebecca M. Douglass, 2016
As always, please ask permission to use any photos or text. Link-backs appreciated!

The Problem of Peggy is scheduled for release Nov. 28. Watch for advance sales information! 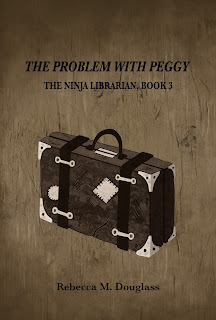 The Ninja Librarian’s back in town, school’s out, and all’s right with the world…or is it? Big Al may be looking forward to spending her time swimming in the creek and wandering the hills, but Peggy’s looking forward to a life of drudgery. If Al can’t find a way to sway her pa, the brightest kid in Skunk Corners is going to take drastic action.
With a mystery from the past haunting one of the houses and creating the biggest threat yet to the town, Big Al’s going to be kept busy this summer, and not just with practicing her moves for the Ninja Librarian.
faeries flash fiction love stories