- September 14, 2016
It's photo time again! Back in July my husband, Eldest Son, and I spent a week backpacking in the Ansel Adams Wilderness (in the Sierra Nevada mountains just south of Yosemite). Here are some highlights.

Day One:
We drove from SF to LeeVining on Day Zero, so that the first day of our hike we had only to pick up our permit at the Mono Lake ranger station/Visitor's Center and drive a short distance to the trailhead. By 10ish, we were on our way, climbing the rather formidable rampart into the wilderness.
Finally getting above the lakes, we encountered the idyllic waters of Rush Creek. Having hiked far enough and climbed more than enough, we found a camp and settled in, with plenty of afternoon left for exploring, bathing, and sitting around camp reading. 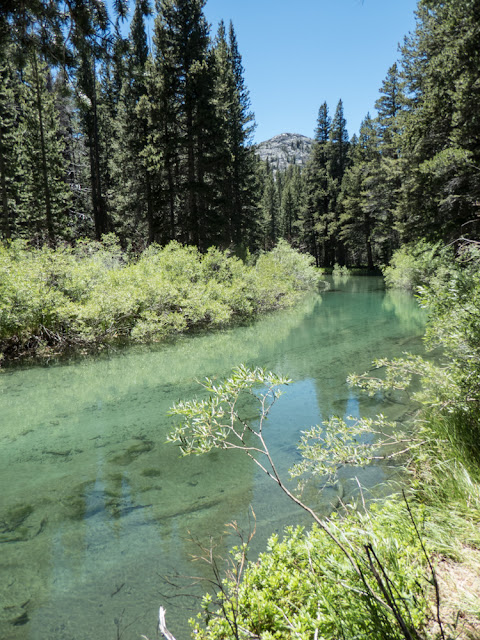 Day Two: Leaving civilization behind. We woke early, and after breakfast hit the trail, eager to get into the high country. We were dismayed to find that Waugh Lake, the 3rd in the series and well inside the Wilderness Area, was also dammed. But there were great views from along the shores.
Our route took us through subalpine forest and up past alpine meadows.
An impressive final climb took us to Marie Lake at over 10,000', where the breezes blew a little briskly, but the view from our room was top-notch. 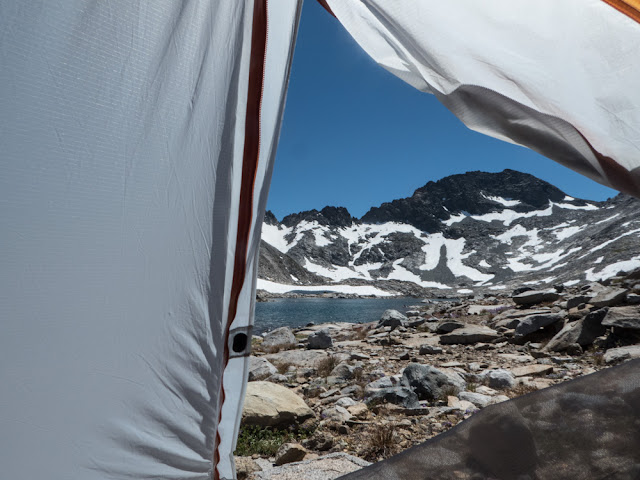 Day Three: A short cross-country ramble. We could have done it all by trail, but chose instead to walk cross-country from Marie Lake, past Rogers Lakes, and over a low ridge to the Davis Lakes. The route proved easy, with only one spot that required a little route-finding, and the meadows were idyllic (with a few mosquitoes).
The Davis Lakes brought more fields of paintbrush and stunning alpine backdrops. 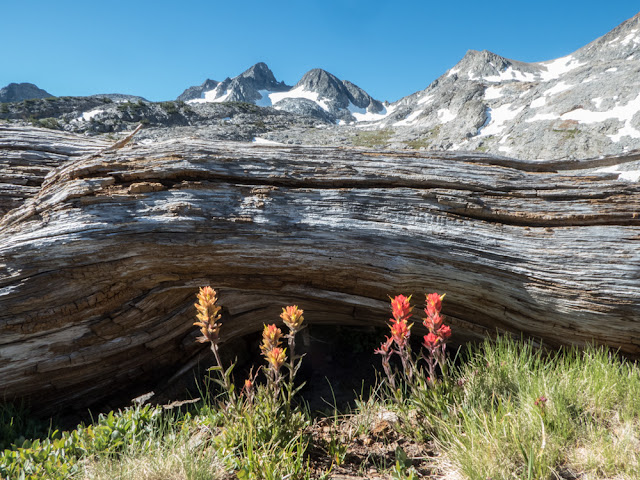 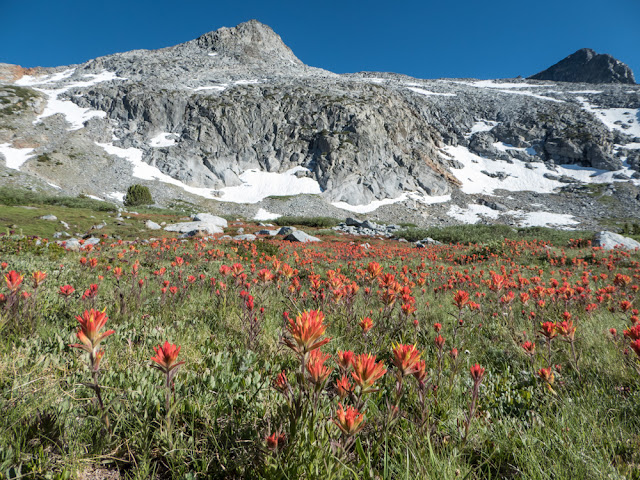 The short mileage gave us extra time for photos, more reading, and some time to sit in camp and talk with our son. We did an after-dinner ramble to see what the evening light would give us, as well.
Day Four.
We touched the trail this time for only a mile or so, but the trail was the PCT/John Muir Trail, and we saw a number of parties. Though predictable, the crowds came as a bit of a shock, as until then we'd seen only a handful of people the whole trip, and none for two days. We stopped on the trail for the iconic views of Banner Peak from Islands Pass. 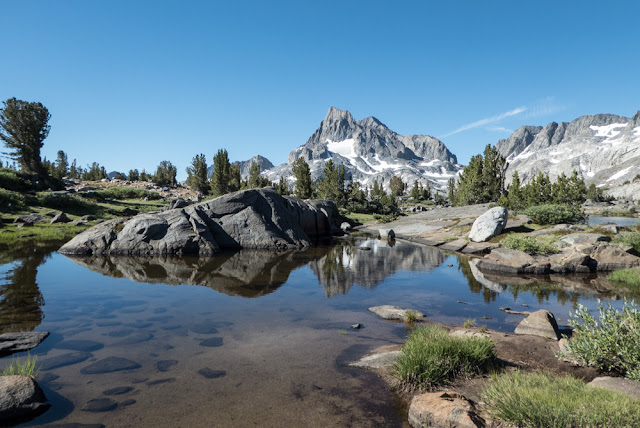 We weren't the only ones enjoying the setting.
We left the trail at Islands Pass, heading in a more direct line for North Glacier Pass, the access to climbing routes on Banner and Ritter Peaks. For a time, the walking was easy.
Later, the going got a great deal more challenging, and over the next two days we spent far too much time among boulders like these.
Despite everything, we found a place to camp, and settled in for two nights, to allow for a climb.
Our camp spot, just below the outlet from Lake Catherine, gave us beautiful evenings.
Day 5. Next morning saw us heading off early up the peak of our choice. We'd had thoughts of climbing Banner, but the approach was awkward from where we'd camped, and Mt. Davis was closer and lower. We opted for the easier climb. 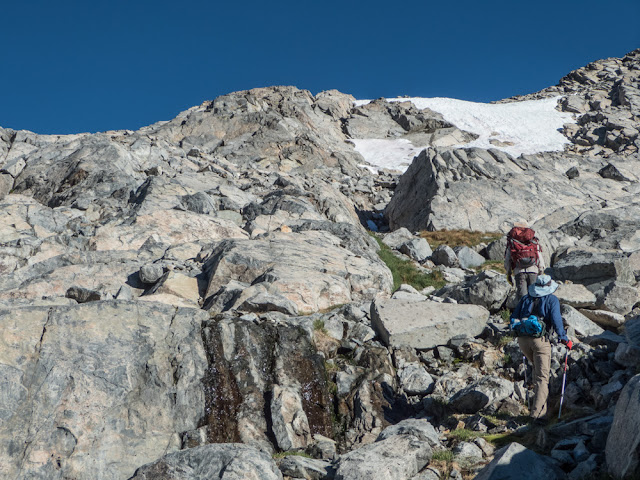 Day 6: Down again.
Our 6th morning saw us retracing our painful scrambling steps around Lake Catherine and over North Glacier Pass, but the descent from there was better than our climb, as we found and stuck with the well-worn use trail we had missed on the way up. This was a very short day, as we only dropped to 1000 Island Lake, and located a campsite along the south shore, well away from the other campers.
Our camp above the lake shore was chosen for this view of Banner Peak--and proximity to a beautiful cove with a beach of coarse sand, where we were able to take a real swim.
Day 7.  Hiking out. We had sort of expected the final day to be nothing but a slog, but we took a different route than the way in, and found that we kept getting stunning views of the high peaks even as we left. That gave us lots of excuses to stop, turn around, and take photos. 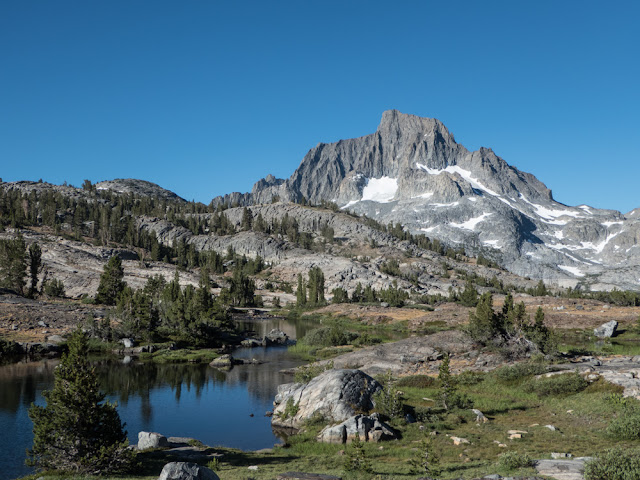 Eventually, however, there was nothing left but the 3000' drop to the car, down a canyon too steep and abrupt to photograph.
Only one vital stop left:

©Rebecca M. Douglass, 2016
As always, please ask permission to use any photos or text. Link-backs appreciated!