- September 26, 2016
Sort of a dual review of Homecoming and Dicey's Song,  the first two books of the Tillerman cycle by Cynthia Voigt. A review of #3, A Solitary Blue, will come separately as these two are the books of the cycle that are really about Dicey. 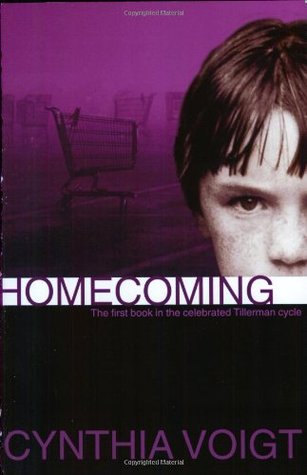 I couldn't find an image of the cover of Homecoming from the hardback I read. I did find it for Dicey's Song, so I'm including it. I think I like it better.

Summary:
Homecoming follows the four Tillerman children--Dicey, age 13, James (10), Maybeth (9), and Sammy (6) after their mother walks away from them in a shopping mall parking lot. They find their way, mostly walking, to their great-aunt's house in Bridgeport, but nothing there is what they expected. So the Tillermans set out again, in search of the home they need.

In Dicey's Song, the siblings are settled with their grandmother, but that turns out not to be the end of Dicey's work. There are a number of problems to solve, and Dicey and her grandmother both have a lot to learn about being a family, and about reaching out to a hand that's reaching to them.

My Review:
Because these books date back to my high school college years, they do have a feeling of being of another time (as an aside, it is only when reading books from that era that I believe things were really that different then). I would hope that those differences wouldn't stop a modern child from reading, because I think anyone would admire Dicey and the inner strength that keeps her going when she has no idea what she's doing.

The "Great Middle Grades Reads" Goodreads group has discussing in the past the trope of the dead/absent parent in middle grade books, and the way in which that can be used to set the children free to be independent. In this case, the absent parents force Dicey to grow up--but what she is already mature enough to know is that they most need a parent. She's not looking for adventure, but Dicey is willing to take a lot of chances and tell all the lies she needs to in order to keep the family together and find a home. The lost parents don't feel at all like a trope; they feel like a tragedy.

Dicey is an interesting protagonist. She is often prickly and difficult, and I at times wanted to shake her and insist she let people into her life and pay attention to them. But that was, after all, what she had to learn to do. After being in charge from far too young an age, as the children's mother became more and more mentally ill and incapable, she'd become too self-reliant and untrusting, and very nearly lost her way a few times. In the end, I liked Dicey, prickles and all, and was wholly absorbed in her story. And that, after all, is what books should do.

I was very glad there was a sequel and I could get it quickly, because I did feel that the first book left almost as many things hanging as it tied up. By the end of the second book, I felt better about leaving her. In a lot of ways, the two really should be one fat book, though the first does have enough of an ending to satisfy most kids, anyway.

Both books won multiple awards, and I think they are justified. I even think these are books that might appeal to both adults and the children for whom they were written.

Recommendation:
I recommend the series for kids maybe 11 or 12 and up. I can't point to anything that's inappropriate for younger kids, but it just felt a little old for most grade school children. Some of that is due to the situations in which Dicey finds herself, but I think it's mostly just the level of the writing, which is not particularly simplified for young readers. I'll also recommend it for anyone (of any age) who just likes a good story.

FTC Disclosure: I checked these books out of my library, and received nothing from the writer or publisher in exchange for my honest review.  The opinions expressed are my own and those of no one else.  I am disclosing this in accordance with the Federal Trade Commission's 16 CFR, Part 255: "Guides Concerning the Use of Endorsements and Testimonials in Advertising."

###
Meanwhile, don't miss this month's promotion, in advance of Monday's cover reveal for The Problem of Peggy! (The Ninja Librarian, Book 3)
The price for The Ninja Librarian has dropped to 99 cents for the ebook, at Amazon or Smashwords. So get a copy and discover the world of Skunk Corners for yourself! 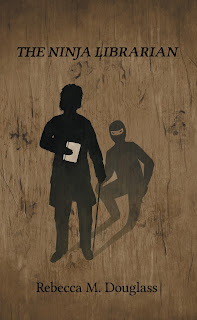