Middle Grade Monday: Bread and Roses, Too, by Katherine Paterson 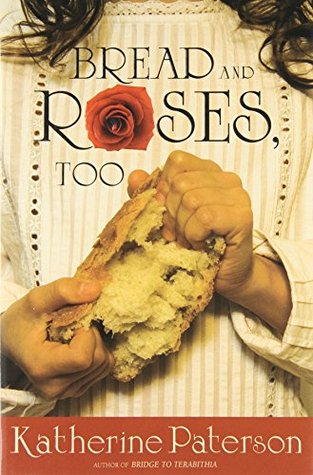 Publisher's Summary:
Rosa’s mother is singing again, for the first time since Papa died in an accident in the mills. But instead of filling their cramped tenement apartment with Italian lullabies, Mamma is out on the streets singing union songs, and Rosa is terrified that her mother and older sister, Anna, are endangering their lives by marching against the corrupt mill owners. After all, didn’t Miss Finch tell the class that the strikers are nothing but rabble-rousers—an uneducated, violent mob? Suppose Mamma and Anna are jailed or, worse, killed? What will happen to Rosa and little Ricci? When Rosa is sent to Vermont with other children to live with strangers until the strike is over, she fears she will never see her family again. Then, on the train, a boy begs her to pretend that he is her brother. Alone and far from home, she agrees to protect him . . . even though she suspects that he is hiding some terrible secret. From a beloved, award-winning author, here is a moving story based on real events surrounding an infamous 1912 strike.

My Review:
Given the author's other work, I wasn't surprised to find Bread and Roses, Too a well-researched and well-written piece of historical fiction. I particularly appreciated that Rosa isn't a brave and ardent supporter of the strike. She's afraid, and not at all sure that the strike is the right thing to do, as she is influenced by her teacher on the one hand, and her mother and sister on the other hand. She's a more impartial witness than many, concerned only with the safety of her family.

Nor is this only Rosa's story. The train is not the first place Rosa meets the boy Jake, and the book tells his story as well, shifting between their stories. While Rosa is a child of immigrants and is dedicated to school and her education, Jake is "native born" and has been working in the mills for a long time, supporting an alcoholic father when he's not living on the streets to avoid his father's drunken violence. He has no interest in school, and their stories make a nice counter-point to the anti-immigrant rhetoric that is flying around the city and even comes from Rosa's teacher. Though Jake needs the money the mill owners want to cut from their wages, he isn't any bigger a fan of the strike than Rosa in many ways. Without work he has to return to the streets, where he steals as one to whom something is due. And indeed, we can't help feeling that something is due both these children, and in the end, they get it. It's not a completely fairy-tale ending, but Rosa gets her family back, and Jake gets a new start, and that's better than either feared they might get.

Recommendation:
As I often find with historical fiction for children, I learned a lot about a bit of history I didn't know before. And in addition to a good story about Jake and Rosa, I found myself admiring the courage of the workers who risked everything (some gave their lives) to win a little justice and fairness for the workers. I recommend the book for children over about age 10 (there are some tough things in there) and for adults as well.


FTC Disclosure: I checked Bread and Roses, Too out of my (digital) library, and received nothing from the writer or publisher in exchange for my honest review.  The opinions expressed are my own and those of no one else.  I am disclosing this in accordance with the Federal Trade Commission's 16 CFR, Part 255: "Guides Concerning the Use of Endorsements and Testimonials in Advertising."

###
Our Final Summer Reading Sale:  For the month of August, Halitor the Hero is just 99 cents for the ebook!

Or purchase in the format of your choice from Smashwords.
1912 strikes historical fiction middle grade review workers' rights