- August 19, 2016
This story was inspired by a little ornament I saw atop a mailbox while out biking this week. It must have a story behind it, though given the neighborhood, I'm sure it's a very different story from the one I have chosen to give it. To me, the story feels like another nod to L.M. Montgomery. Slightly longer than usual at just under 1100 words.

“I don’t think we’ll ever save enough.” Evelyn didn’t say it to be discouraging. It was a simple statement of fact. That made it worse.

“I do hope so,” Evelyn said with a glance around their run-down apartment. Soot from the trains and factories marked everything, and the street outside was noisy and crowded. “But I really think pigs will fly before we save enough money for even a little farm.”

Barry grinned. “When I prove you wrong, I’ll name our place Flying Pig Farm.” They laughed, and sighed, and Barry took his lunch and went to work.

Barry and Evelyn Thomas were small-town people, but hard times had forced them into the city. After a month or more of doing odd jobs, Barry had landed a place at a factory, which gave him hope. Evelyn managed the household budget, and was less confident. They’d be lucky to save a few dollars a month. If she could find work, maybe they could get ahead, but the factory hired few women, and paid them next to nothing.

Evelyn fumed while she cleaned the apartment. Women were paid less, and given the most dangerous jobs, and that was just wrong. She could work as hard as any man, and often had.

It was while she was stewing over this injustice that Evelyn had an idea that took her breath away. She put down her futile dusting cloth and looked in the spotted mirror. If she cut her hair and wore men’s clothes, she could pass as a man, or at least a boy. She was strong and well-muscled for a woman, with a boyish figure that would take little disguising.

Should she tell Barry her idea? He was willing that she should work, if she could find work that wasn’t too dangerous and paid enough to be worth it.

“It’s wrong to pay women less, and I guess if can fool them I’ll prove it!” Evelyn told the cat. “But Barry might not approve of lying.” Evelyn was more pragmatic than her husband. If a lie could correct an injustice, then she would lie.  She looked again at her hair and sighed.

She wouldn’t mind getting rid of the great heavy rope of hair she braided every morning and pinned to her head. A bob would be a relief, and here in the city lots of girls were wearing them. Not many wives, but someone had to be first.

Evelyn looked in her purse and counted the few bills and coins there.
An hour later, she looked into a cleaner and clearer mirror, heart in her throat. It was perfect. The hairdresser had, as instructed, cut it as short as a woman might wear, and Evelyn’s head felt light and cool, and the short bob set off her face nicely, too.

"I don't know what my husband will say," Evelyn told the hairdresser as she paid. "But I think it's wonderful."

The woman, whose hair was cropped as short as Evelyn's, nodded. "He'll get used to it, you'll see. And it’s such a relief to be free of all that hair."

With a man's hat and the right clothes, Evelyn could now pass for a man, or at least a boy. A boy of 16 earned a man's wages, more than a woman of any age. She went from the hairdresser’s right to a shop that sold half-worn clothing, and went home to change. She couldn’t wait to go out and try her disguise.

It was a pleasure to stride along without the impediment of skirts. She was enjoying the sensation--and the way no one paid her any attention--when she became aware of a disturbance.

A cart had gotten stuck in an alley, and the carter was yelling and beating the animal instead of fixing the problem. When the horse screamed and reared she ran to it, not stopping at all to think. She yelled at the driver to drop the reins and his whip, as she reached for the horse's head.

"Easy, now," she crooned to the animal. She'd always been good with animals and in a moment the horse had calmed. The carter still sat on his seat and shook, while a better-dressed man cursed at him, then told him to get down and leave.

The owner of the cart looked at the mess, then turned on her. “You, boy! Can you drive a cart?”

Evelyn nodded, not trusting her voice.

“At what wage?” She’d never have asked that without her disguise. He named an hourly wage that took her breath away. It was nearly as much as Barry made, and far more than even the women who supervised the other factory women. She shook hands on the deal and went to work.
#
It didn’t take long for Barry to find her out, of course. Evelyn told him she’d cut her hair on account of the heat. He was sad, but admitted it must be more comfortable. She told him she’d found work, but not how, or exactly what.

For a few weeks Evelyn kept her secret, leaving the house after Barry did, so he never saw her in her man’s clothes. She finished her deliveries by late afternoon and was always home, dressed in her own clothes, before Barry arrived. If she smelled a bit horsey, he knew her job had something to do with the animals.

It wasn’t until there was a breakdown at the factory and the workers were sent home early that Barry learned Evelyn’s secret. He was waiting when she got home, and studied her a moment.

“Young Mister Thomas, I presume?” he asked, and swept her into a tight hug. “Now I know how my clever wife found a job that pays so well,” was the only comment he ever made about the deception.

Barry laughed. “How could I be? I think I hear the flutter of pig wings!”
#
Even with Evelyn’s earnings, it took two years, but at last the day came when Evelyn and Barry Thomas walked in the front door of their own house, on their own land.

A few weeks later, Barry fastened a sign to the gate. Atop the gate he bolted an iron ornament he’d had the blacksmith forge specially. 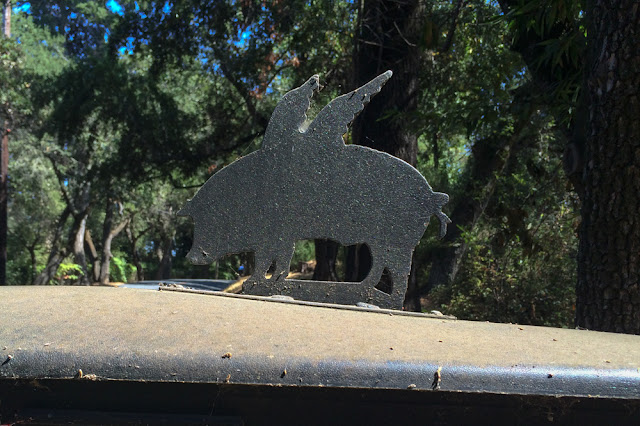 ©Rebecca M. Douglass, 2016
As always, please ask permission to use any photos or text. Link-backs appreciated!
If you enjoy my stories, please consider purchasing my books. Final week for the 99 cent special on Halitor the Hero!
For Amazon purchase link, click the cover image.

Or purchase in the format of your choice from Smashwords.
flash fiction historical fiction long shots