Day 1. After driving up from SF late on Friday, we had to rise early Saturday to go stand in line to get a backcountry permit. I miss the days when we just signed in at a trailhead and started hiking, but it's a reality. Numbers have to be limited in too many areas. We get our permit, and even after eating breakfast and finishing our packing, we are ready to hit the trail at something like 9 a.m.
The trail to Pear Lake, our first camp and the only one that is a) below treeline and b) restricted, is crowded with dayhikers. That doesn't ruin the scenery, and people-watching can be a distraction from the hard work of carrying a first-day pack up 2000'.
Flowers along the way are amazing. Lower down, we saw leopard lilies and wild geranium along with lupine and paintbrush. Up near the lake (9500'), it was mostly penstemon, with delicate yellow columbines.
Pear Lake was beautiful, as advertised.
Day Two. This was the end of trails and the end of other campers nearby. We were up early and off up the slope above the lake (out of sight to the left of the picture), while other campers watched from below, possibly wondering if we had lost our minds (or thinking that we had the right idea. It all depends). The sun rose as we topped out the first rise in a veritable garden of wildflowers.
It took about 3 hours to make our way over several more ridges and into the area called the Tableland. We kept going until we were well onto the "plateau" (a great deal more ridged and slopey than it looked on the map) and found a decent alpine lake. Then we spent the better part of an hour searching for a campsite with views, a breeze, and access to the water. We ended up with a pretty good compromise.
Day Three. It got pretty cool overnight, and we saw the evidence as we set out for a long dayhike.
Our goal for the day was the top of the King-Kaweah Divide, and a few lakes just over the other side. We got seduced by the wrong drainage, and got a good view of an extra canyon, before finding our way around to overlook Deadman Canyon.
Big slabs of granite gave us easy access to the upper lakes (Big Bird Lake is barely visible above to the right of the peaklet). But the cliffy rampart was a surprise, as maps suggested we could climb out that way. No way.
We explored the lake basin, peered over the edge at Big Bird Lake, but as the shortcut back out was clearly a no-go, we didn't drop all the way down. Instead, we climbed back up more or less the way we came, and circled around to the high point above the lakes.
By the time we returned to camp, it was after 5, and we'd been out hiking (and photographing and eating) for 9 hours. It was tiring, but better than hanging around in camp swatting mosquitoes and cooking under the blazing sun. There was just time enough for a bath (and then another bath in DEET) and dinner before the sun went down and the evening chill iced the mosquitoes.

Day Four. Another early start, as we had an ambitious day. Our change of plans on Day 3 had left one lake unvisited, and we resolved to explore it before moving camp to our final position.
We didn't do a very good job of selecting a route, which meant we spent a lot of extra time scrambling up and down slopes. Eventually, however, we reached the saddle that gave access to the  basin housing Lonely Lake. We rambled about, eventually descending to the lake and enjoying a pleasant wade on the sandy beach at the upper end. (That was also where we saw the marmots.) 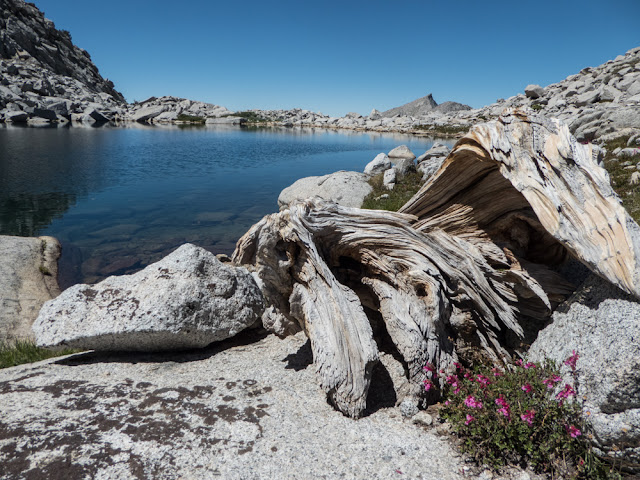 Not back to camp until after 2, we rested for an hour or so before packing up and heading for Moose Lake, our final-night destination. Happily, unlike all the dayhikes, the hike to Moose Lake was much shorter than I thought it might be, and we settled into camp about 5 p.m.
There were still no clouds, so no great sunsets, but we had a different view of the peaks and a nice perch not too far from the lake. The buzzers were more bite-y here, so that bathing was tricky. You were fine in the water, but the transition from lake to clothes was perilous indeed!
Day Five. The final day. We knew we had a tough one ahead of us--2 or 3 miles cross-country, then about 6.5 miles of trail to reach the car--and a 5-hour drive home. With the alarm set for 5:30 a.m., we were able to hit the trail just before 7. We didn't neglect the photos even with a tight schedule.
It took us nearly 3 hours to reach the trail, and only 2 1/2 hours to reach the car from there! Route finding and picking your way over boulders and through brush can be a slow process. Long ago there was a trail all the way to Moose Lake, and for some of the distance we were able to follow it. But when the going got tough--the trail apparently got going, because it was nowhere to be found!
Sick and tired of trail lunches, we were happy to stop at the Lodgepole Visitor Center and the campground store, where we happily chowed down on burgers & fries (and fruit), and chased it with ice cream. We were home in time for a late dinner!

©Rebecca M. Douglass, 2016
As always, please ask permission to use any photos or text. Link-backs appreciated!

And the sale goes on, while the Librarian is out hiking!
Only 99 cents each!