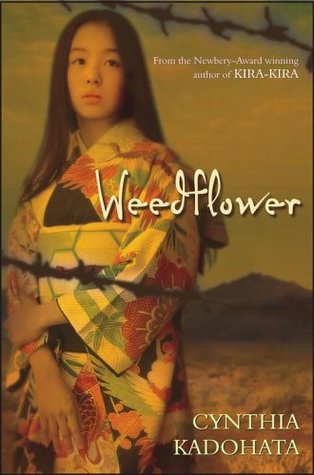 Title: Weedflower
Author:  Cynthia Kadohata
Publisher: Atheneum Books for Young Readers, 2006
Source: Library
Publisher's Summary:
Twelve-year-old Sumiko feels her life has been made up of two parts: before Pearl Harbor and after it. The good part and the bad part. Raised on a flower farm in California, Sumiko is used to being the only Japanese girl in her class. Even when the other kids tease her, she always has had her flowers and family to go home to.

That all changes after the horrific events of Pearl Harbor. Other Americans start to suspect that all Japanese people are spies for the emperor, even if, like Sumiko, they were born in the United States! As suspicions grow, Sumiko and her family find themselves being shipped to an internment camp in one of the hottest deserts in the United States. The vivid color of her previous life is gone forever, and now dust storms regularly choke the sky and seep into every crack of the military barrack that is her new "home."

Sumiko soon discovers that the camp is on an Indian reservation and that the Japanese are as unwanted there as they'd been at home. But then she meets a young Mohave boy who might just become her first real friend...if he can ever stop being angry about the fact that the internment camp is on his tribe's land.
My Review:
This is a well-written piece of historical fiction. Any reader will feel the injustice of the Japanese internment in WWII, as well as the hurt of any child who is rejected for reasons she can't even fully understand. In that, it's a powerful work, and well worth the reading. The book gives the reader a good introduction to what that decision on the part of the US government did to individuals, families, and an entire culture. The author only touches on something that was a major problem, the destruction of the family unit as children banded together and ate apart from their parents or even other siblings, and as families were torn apart by the question of signing the loyalty oath.
The book did feel flawed to me, however, in a couple of ways. One isn't so much a flaw as just how it is put together: the two parts of Sumiko's life almost end up feeling like two separate books, though I think the first part is necessary. The reader needs to see Sumiko doing daily things--not exactly what the reader does, but things that feel human and ordinary and include kid things like sometimes resenting chores--in order to feel fully the shock of the uprooting.
The other issue I had is worse, though I'm not sure how I'd fix it. That is quite simply that the conflict in the story is so huge, and so far beyond Sumiko, that there is no sense really of the development of a story, and certainly no sense of resolution. I don't know; maybe that is just as well if you want to keep the focus on the real injustice. Certainly the characters are well-drawn, so that we care about Sumiko and her life. And I appreciated the way that she, as children do, becomes at home in the camp--at home enough to not want to leave and start yet again. And maybe the fact that she's given no choice about that, either (by the adults in her own family, this time) is no accident: kids are blown by parental winds, in a smaller and more benign echo of what was done to an entire population.
Recommendation:
Weedflower is a good book for introducing children to this aspect of WWII. It is suitable for any kids old enough to cope with the frustration at the injustice (maybe 8 and up, depending on the child). I can also recommend books by Yoshiko Uchida, both fiction and her personal narrative (suitable for older children; some libraries put it in adult biographies, some in kids'), and for adults, Looking Like the Enemy, by Mary Matsuda Gruenewald (in the interests of full disclosure, her brother was my Sunday School teacher long, long ago) which tells of one family's experience being deported from the Pacific Northwest to camps in Idaho and Montana.

FTC Disclosure: I checked Weedflower out of my library, and received nothing from the writer or publisher in exchange for my honest review.  The opinions expressed are my own and those of no one else.  I am disclosing this in accordance with the Federal Trade Commission's 16 CFR, Part 255: "Guides Concerning the Use of Endorsements and Testimonials in Advertising."

The Ninja Librarian and Return to Skunk Corners on sale--just 99 cents for the month of July!