Cemetery – Image by KL Caley For visually challenged writers , the image shows a cemetery path with graves and trees aligning each side of it.   I'm writing this for the weekly #WritePhoto challenge by KL Caley at New2Writing.com. Read all about it and join in if you'd like! I think this is meant to be a fall thing for Halloween, but I'm seeing trees just leafing out, not ones that have dropped their leaves, so I put it in early summer.   Around 800 words this week. Cemetery Visit   The shadows were growing longer, though the sun was still bright and the sky blue. In the long alley between the trees there were hints of the darkness that would envelop the cemetery soon enough.   Lauren stood close to a tall, lean pine tree. It felt warm and living, and the scent of it helped calm them. Why had the boys said they had to come here so early to start their night in the graveyard? Maybe it was to give them a way out—surely at this hour someone would
Post a Comment
Read more 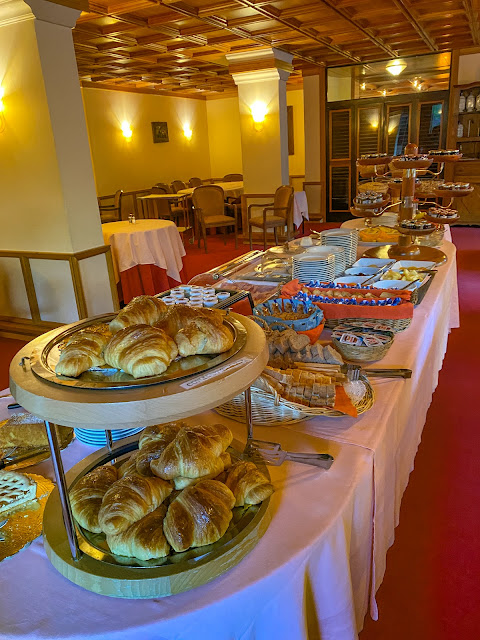 Read the complete TMB series :  Part 1    Part 2     Part 3    Part 4   Part 5   Part 6     Courmayeur Rest Day #1 After about 5 days of significant hiking, we were happy on our first day in Courmayeur to just play tourist in a lazy fashion. We did a walking tour of town, including the old town of Dolonne across the river, before returning to our hotel to spend the afternoon resting. The morning started with beautiful sights indoors... ... and out.      Old Dolonne. I am always fascinated by the ancient walls and doors in places like this. By way of contrast with all the old buildings, we found this very modern sculpture tucked into a courtyard not far from our hotel. I could find no markings indicating title or even who made it. For the record, our restful wanderings totaled about 4 miles. Courmayeur Rest Day 2: Mt. Blanc Skyway Our second rest day was more exciting, and involved much less walking. Having figured out how the day before, we took the bus up the valley a bit to take
Post a Comment
Read more

AudioBook Review: Into the Silence, by Wade Davis

Title: Into the Silence: The Great War, Mallory, and the Conquest of Everest Author:  Wade Davis, read by Enn Reitel Publication Info: Random House Audio, 2011, 29 hours. Original hardback, Knopf Canada, 2011, 672 pages. Source: Library (Overdrive) Publisher's Blurb: If the quest for Mount Everest began as a grand imperial gesture, as redemption for an empire of explorers that had lost the race to the Poles, it ended as a mission of regeneration for a country and a people bled white by war. Of the twenty-six British climbers who, on three expeditions (1921-24), walked 400 miles off the map to find and assault the highest mountain on Earth, twenty had seen the worst of the fighting. Six had been severely wounded, two others nearly died of disease at the Front, one was hospitalized twice with shell shock. Three as army surgeons dealt for the duration with the agonies of the dying. Two lost brothers, killed in action. All had endured the slaughter, the coughing of the gun
Post a Comment
Read more

Photo credit: KL Caley I am writing this for the weekly #WritePhoto challenge by KL Caley at New2Writing.com. Read all about it and join in if you'd like!   This week's offering is a quick read at 415 words.   Woodland Crossing   “Oh, look! A stream neither of us has fallen into yet!” My sister gives me a dirty look. “Hush! That’s just tempting fate.” She puts her hands over her mouth, then her ears, like the speak-no-evil monkey. We both laugh as we approached the stream. “I’m sure we’ve nothing to worry about with a little trickle like this. It’s barely two inches deep.” “It’s too wide to step over, though.” Sis studies the damp-looking rocks sticking up out of the middle, trying to decide if she can cross it without getting her feet wet. Me, I’m thinking about some of the streams I’ve fallen into. They were mostly big, fast, full of snowmelt or glacial run-off. Go big or stay home, as they say. I don’t intend to fall into this dinky thing.
Post a Comment
Read more 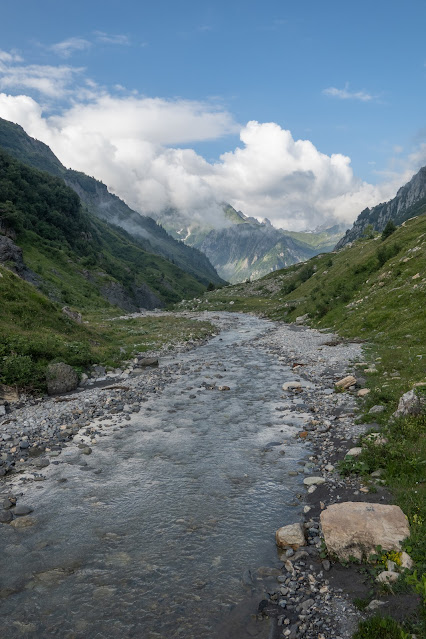 Read the complete TMB series :  Part 1    Part 2     Part 3    Part 4   Part 5   Part 6   TMB Day 3: Les Chapieux to Rifugio Elisabetta We enjoyed our hostel-style breakfast (i.e., communal rather than separate restaurant tables), again with our new British friends, before heading out. (A note on that: to do this trip at all required a certain level of denial about the risks of COVID. There was just no way to avoid a fair amount of contact with others, especially in dining environments.) Our way led up the valley, at first on road then on a trail that paralleled the road but across the river. The guidebook said that this was a good part to skip by taking a taxi or shuttle, but I thought the hike up the valley was very pretty. Despite having somewhat heavier packs than usual, as we would not have our luggage that night at the rifugio, we didn't mind walking. Looking back the way we'd come. The end of the road is in Ville Des Glaciers, which appears to be named for the glacier
2 comments
Read more

Purpose: To share and encourage. Writers can express doubts and concerns without fear of appearing foolish or weak. Those who have been through the fire can offer assistance and guidance. It’s a safe haven for insecure writers of all kinds! Posting: The first Wednesday of every month is officially Insecure Writer’s Support Group day. Post your thoughts on your own blog. Talk about your doubts and the fears you have conquered. Discuss your struggles and triumphs. Offer a word of encouragement for others who are struggling. Visit others in the group and connect with your fellow writer - aim for a dozen new people each time - and return comments. This group is all about connecting! Let’s rock the neurotic writing world! Our Twitter handle is @TheIWSG and hashtag is #IWSG. The awesome co-hosts for the October 5 posting of the IWSG are Tonja Drecker, Victoria Marie Lees, Mary Aalgaard, and Sandra Cox! Be sure you drop in on them and see what they have
8 comments
Read more
More posts